We look at a remarkable film that follows how acclaimed playwright Liza Jessie Peterson gave a mesmerizing performance of her one-person play “The Peculiar Patriot” at the Louisiana State Penitentiary known as Angola, before authorities stopped it halfway through. “Angola Do You Hear Us? Voices from a Plantation Prison” has just been shortlisted for an Oscar, and Peterson and the film’s director, Cinque Northern, join us to describe how they hope to raise awareness about conditions inside the infamous prison.

AMY GOODMAN: This is Democracy Now!, democracynow.org. I’m Amy Goodman, as we end today’s show looking at a remarkable new short documentary that’s been shortlisted for an Academy Award. It’s called Angola Do You Hear Us? Voices from a Plantation Prison.

NORRIS HENDERSON: Angola was a plantation.

LIZA JESSIE PETERSON: Just because you see a prison with your physical eyes, what do you see beyond that?

NORRIS HENDERSON: You start questioning why do we send people to prison, and who’s actually here.

LIZA JESSIE PETERSON: My best friend, she said, “You’ve got a story to tell. Write that [bleep] down.” And I just put the rage on the page, because I had had to do something.

LIZA JESSIE PETERSON: I’ve been to 35 prisons across the country, but this, I knew, was historical, to be on a prison plantation not just to perform, but to activate.

NORRIS HENDERSON: Everybody clung on to every word that she said.

ANGOLA PRISONER 2: You jumpstarted our hearts and our minds.

NORRIS HENDERSON: Here was some truth that somebody couldn’t handle.

AMY GOODMAN: For more, we’re joined by Liza Jessie Peterson, the actor and playwright featured in Angola Do You Hear Us? Voices from a Plantation Prison, which was produced by MTV Documentary Films and by Cinque Northern, artist, filmmaker and director of the Academy Award-shortlisted documentary we’re talking about today.

Congratulations to both of you on this honor. Cinque, why did you choose to make this film and focus on Angola, a prison we have talked about for so long, for example, where Albert Woodfox was incarcerated for so many decades?

CINQUE NORTHERN: Thank you, Amy. And thank you for having us today.

You know, I’ve been following Liza’s work since she was working at Rikers, and had been wanting to do something to sort of elevate the work that she was doing with incarcerated populations as an artist. And obviously, when the opportunity came for Liza to go to Angola, it just became so much bigger. And initially, I had gone down there just really just to shoot the performance, Liza’s performance. It was more a shoot than it was a film at that point. But once what happened in that room happened, then it became a much bigger story. And we saw Angola as a way of telling this singular story about this singular artist, would have a way to really just be an example, you know, of what’s going on, really, throughout the country.

AMY GOODMAN: And specifically Angola, as the title of your film, part of it is this plantation prison, its history, from its name to who is held there?

CINQUE NORTHERN: Yeah. So, a lot of people — I learned, in the process of going there, that the reason it’s called Angola, it was formerly a plantation, and a lot of the enslaved people there were from Angola. And so, when it became a prison — and this is 18,000 acres of farmland. When it became a prison, it kept the nickname Angola. And so, the link of that history, I think, is just very telling.

AMY GOODMAN: So, let’s go back to your film, Angola Do You Hear Us?, where we hear the words of men incarcerated at Angola prison being read by others to protect their identity.

LIZA JESSIE PETERSON: Seeing those white correctional officers on horseback with rifles, I mean, it just looks like something out of the Antebellum South.

ANGOLA PRISONER 2: The majority is all Blacks in the field. At one time, the men in the field line was 300 strong, and you had 10 white boys.

ANGOLA PRISONER 3: So, you know we’ve got over 6,000 people here. They’re warehousing us, bro.

ANGOLA PRISONER 4: Being here, I see that a lot of guys here, they’re broken.

AMY GOODMAN: An excerpt of Angola Do You Hear Us? And we also hear there Liza Jessie Peterson. Liza, tell us your story, that is told so beautifully in this film, how you ended up at Angola and what happened.

LIZA JESSIE PETERSON: Yeah, thank you for having me, Amy.

I had the opportunity to meet Norris Henderson, who’s also featured in the documentary. And he and I are both grantees with Art for Justice. And they had a convening in 2019 where all the grantees, the artists and activists who were working to end mass incarceration who are supported by Art for Justice, we all met. And Norris, who was formerly incarcerated at Angola, took us on a field trip, basically. We got on a bus, and he took about 20 of us — excuse me — to visit Angola. And when he mentioned that there was a drama club at Angola, I got excited, because I wanted to perform my play, The Peculiar Patriot, at Angola. And so, that’s how I met Norris. But there was no way that I could have ever imagined that meeting Norris in New Orleans in 2019 would lead to what happened in 2020 in the chapel at Angola.

LIZA JESSIE PETERSON: Oh, it was pretty stunning. Norris has an amazing relationship with the administration at Angola, because he served over 27 years before he was released, and he still does work with the prison doing reentry work. And so, he was able to facilitate, with the administration, permission for me to not only come to perform for the population, but to also film the production of The Peculiar Patriot. And we had permission.

And literally 15 minutes before I was to go on stage, they told — excuse me — our film crew that we could not film, that we had to shut our cameras down, for no reason. We had no idea what the cause was. And then I went on and performed without filming it. And halfway through the show, when I go backstage to get ready for the next scene, Norris is backstage with a correctional officer standing behind him, and he tells me that there’s been an emergency in the chapel, and we have to end the show. And I just knew instinctively. I said, “Ah, yeah, there’s something else going on.”

AMY GOODMAN: And let’s be clear: It’s not just that people were personally watching you, and they canceled it for them, but this was on closed-circuit TV throughout Angola. How many people, do you estimate —

AMY GOODMAN: — were watching at the point where it was shut down, and why you think it was?

LIZA JESSIE PETERSON: Well, so, what’s interesting, the — you know, Angola has their own radio station. They have their own TV, closed-circuit TV station. And so, they had the incarcerated men who run the television station film the play so that it could be live-streamed through the entire prison. And I think approximately 6,000 or 7,000 men are incarcerated. So, in the chapel, there were physically about 700 men or more packed into the chapel to watch it, and then live-streamed throughout the entire prison. So, they were able to see everything. They were even able to see the shutdown. So, even though our cameras were not allowed, the live stream — so, the men who were in the housing areas, they got to see the moment when it shut down and the raucous reaction that happened, that followed afterwards. And I would say — and I was told by the men, who contacted me after the performance through their wives and through contraband phones or whatever means they had available, that the housing areas, that the day rooms were packed, that men were crowded around the televisions watching the performance.

AMY GOODMAN: This must have been amazing for you, Cinque Northern, as you filmed this performance. And watching this short documentary, I hope there are no flies in the room when anyone watches, because your jaw drops. You might choke when the flies fly in. But, Cinque, maybe in the same way, that when you saw, yourself, the film, shortlisted for an Oscar — what are you hoping to do with this over these coming weeks?

CINQUE NORTHERN: Well, I mean, we really want as many people to see it as possible. We always had an idea that this film would create empathy.

And just to add to what Liza said about what happened in that room, an important thing to remember is, before it got shut down, those men were laughing, they were crying. They were so captivated by these characters that Liza had created. Liza wasn’t just in there giving statistics. She really embodied these characters. And I think the interruption of that created this momentum that kept going.

But as far as the film, I mean, we are hoping to get nominated. You know, that would bring so much awareness, so much more awareness to this, and really, I hope, would have people be unsettled with this reality and look further into it.

AMY GOODMAN: And how people are able to watch this now all over?

CINQUE NORTHERN: You can watch it now streaming on Paramount+.

AMY GOODMAN: And, Liza Jessie Peterson, as we wrap up, what you want people to take away with? You’re the last guest of our year here at Democracy Now!

LIZA JESSIE PETERSON: Well, that’s quite an honor. And I really hope that people will take away the humanity of people who are incarcerated, and to not just know them as numbers or see the statistics, but know that for every number there is a human being connected to that number, and there’s a family and their family members. So I hope that this film will inspire and ignite compassion, empathy and healing, and, most importantly, reimagining how we deal with mass incarceration and to envision something different than what we have now.

AMY GOODMAN: Well, Liza Jessie Peterson, actor, playwright, and Cinque Northern, director of the short documentary Angola Do You Hear Us? Voices from a Plantation Prison, which has just been shortlisted for an Academy Award. You can watch it at Paramount+ streaming.

That does it for our show. I’m Amy Goodman. Happy News Year! 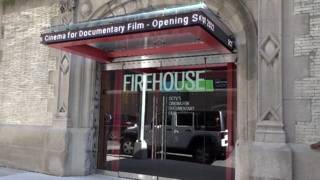