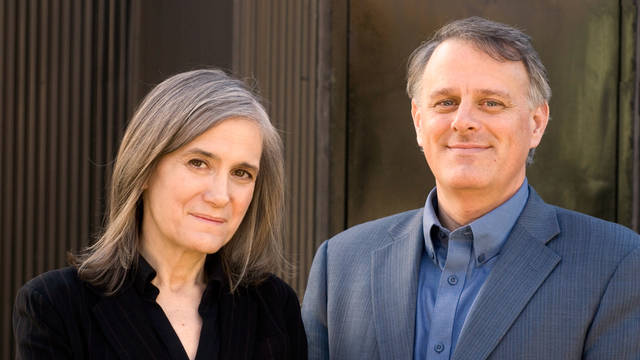 Leonard Peltier is a 77-year-old Anishinabe-Lakota Native American activist imprisoned for 46 years for a crime he says he did not commit. Amnesty International calls him a political prisoner. Peltier recently contracted COVID-19 inside the Coleman maximum security federal penitentiary in Florida, where prisoners have reportedly been denied vaccine booster shots.

“In and out of lockdown last year at least meant a shower every third day, a meal beyond a sandwich wet with a little peanut butter — but now with COVID for an excuse, nothing,” Leonard Peltier recently wrote. “No phone, no window, no fresh air — no humans to gather — no loved one’s voice. No relief. Left alone and without attention is like a torture chamber for the sick and old.”

Leonard Peltier, a member of the American Indian Movement, was convicted of involvement in the killing of two FBI agents, Jack Coler and Ron Williams, in a shootout on the Pine Ridge Reservation in South Dakota on June 26th, 1975, during a period of intense violence on the reservation. Peltier’s arrest and trial were marred by prosecutorial misconduct, withheld evidence, coerced and fabricated eyewitness testimony, and more.

The shootout occurred just three years after the death of J. Edgar Hoover. Under Hoover, the FBI engaged in widespread illegality with its COINTELPRO program, directed against civil rights and antiwar organizations. Groups like the Black Panthers and individuals including Martin Luther King, Jr. were targeted for surveillance, disruption, infiltration, intimidation, and false prosecutions. The FBI intensively targeted the American Indian Movement, which was active protecting elders on the Pine Ridge Reservation.

Peltier’s attorney, Kevin Sharp, learned that Peltier had a negative COVID test recently, but not much more: “When will boosters be made available? Any changes in prison COVID protocols to ensure prisoners are safer? When can I speak to Leonard? ” Sharp wrote in an email to us Wednesday. “I was earlier denied a call with the Assistant Warden trying to get these answers.”

Kevin Sharp’s route to Peltier’s case was unusual. Nominated to the federal bench by President Obama in 2011, he served as a federal judge in Tennessee for six years, three of them as Chief Judge. In 2017, he resigned, denouncing the mandatory minimum sentences that he was forced to impose. He then worked for the release of Chris Young, who he had mandatorily sentenced to life without parole. TV personality Kim Kardashian got involved, and they won clemency for Young from President Donald Trump. Publicity from that prompted long-time Peltier supporter Connie Nelson, the ex-wife of musician Willie Nelson, to send Sharp information on Peltier’s case.

“I sat down to read the stacks, just reams of information on Leonard’s case, not really coming at it with any preconceived notion… looking at it from the viewpoint of a federal judge,” Sharp explained on the Democracy Now! news hour. “What I saw was shocking. The constitutional violations just continued to stack up. I was outraged that this man was still in prison.”

The movement for executive clemency for Leonard Peltier peaked in late 2000, as President Bill Clinton was leaving office. Clinton promised to give Peltier’s clemency application “a looksee” on WBAI radio in New York City, when he called us on election day to get out the vote.

President Clinton infamously abused the presidential power of clemency, granting pardons to campaign donors and cronies of his half-brother, among others. He denied clemency to Leonard Peltier, as did his successors, Presidents George W. Bush, Obama and Trump.

One of the federal prosecutors who put Peltier in prison spoke out, in 2017. “Leonard Peltier’s conviction and continued incarceration is a testament to a time and system of justice that no longer has a place in our society,” retired U.S. Attorney James Reynolds wrote to President Obama. “I have realized that the prosecution and the continued incarceration of Mr. Peltier was and is injust.”

Senator Brian Schatz of Hawaii, who chairs the Senate Committee on Indian Affairs, wrote a letter to President Biden on January 28th. “I write to urge you to grant a commutation of Leonard Peltier’s sentence. Mr. Peltier meets appropriate criteria for commutation: (1) his old age and critical illness, (2) the amount of time he has already served, and (3) the unavailability of other remedies,” Schatz wrote.

On February 2nd, HuffPost reporter Jennifer Bendery asked White House press secretary Jen Psaki, “Does the President know who Leonard Peltier is?” Psaki replied, “I’m sure he does, but I have not discussed it with him.” Bendery also asked Senate Judiciary Committee chair Sen. Patrick Leahy about Peltier. Leahy said he would ask President Biden about Peltier in their upcoming private meetings.

President Biden must take action, granting long overdue clemency to Leonard Peltier after close to half a century in prison for a blatantly political prosecution.