Is the NFL Run Like a Plantation? Ex-Player Donté Stallworth Responds to Bombshell Racism Lawsuit

Ahead of the Super Bowl this weekend, we speak to former National Football League player Donté Stallworth about racism and anti-Blackness in the league. Last week, former Miami Dolphins head coach Brian Flores sued the NFL, as well as three teams — the Dolphins, Broncos and Giants — for discriminating against him as a Black candidate during his interview process. In his complaint, Flores says the NFL is “racially segregated and is managed much like a plantation,” with wealthy white owners and head coaches at the top while the majority of players who risk bodily injury are Black. “Hopefully at the end of this, Brian Flores can continue his coaching, but also that we can see some changes in the NFL,” says Stallworth.

The NFL, the National Football League, is run “like a plantation.” That’s the explosive charge levied by former Miami Dolphins coach Brian Flores in a class-action racial discrimination lawsuit filed last week, on the first day of Black History Month, against the league and three teams. While 70% of NFL players are Black, all of the owners and nearly all of the head coaches are white. During this past season, there were three Black head coaches, but two of them — Flores and Texans coach David Culley — were fired soon after the season ended.

The class-action lawsuit stems from Flores’s firing by the Dolphins and his attempt to get a new coaching job with the Denver Broncos and New York Giants. Flores’s lawsuit alleges the Giants had already decided to hire a new white coach before the team even conducted an interview with Flores. This might violate the NFL’s Rooney Rule, that requires teams interview candidates of color for open coaching positions. In his lawsuit, Flores alleges he was also set up to fail as a coach when, with the Dolphins, he claimed, the team’s owners once offered him $100,000 for each game he would lose in order to help the team get a better draft pick.

Donté, it’s great to have you on Democracy Now! Is the NFL a plantation, run like a plantation?

DONTÉ STALLWORTH: Well, Amy, if you look at the history of the NFL’s hiring practices, it doesn’t seem that they are really making a lot of progress with the intention of the implementation of the Rooney Rule. The Rooney Rule was named after Dan Rooney, who was the former owner of the Pittsburgh Steelers and the former chairman of the diversity board in the NFL. He, this committee — sorry, this committee had a rule that essentially requires NFL teams to implement in their hiring practices to look at multiple diverse candidates in head coaching positions. And it’s been updated throughout the last few years to also make sure that the NFL is — in their hiring practices, that they’re also hiring NFL personnel, senior-level personnel in the NFL.

Now, when you look at the last 129 coaching vacancies since the Rooney Rule has been implemented, there’s only been 15 Black head coaches that have come out of that. And I believe in — the rule was implemented in 2003, after a couple months prior, where you had two lawyers, one of them whom was Johnnie Cochran — two civil rights lawyers who published a report basically stating that — where they found that Black head coaches in the NFL were more likely to be fired and less likely to be hired than their white counterparts.

And this thing has moved up throughout not just in the NFL, but it’s kind of shifted throughout even politics. I remember in 2005, former President Obama had urged tech leaders to adopt their own type of Rooney Rule, that would encourage them and urge them to hire more minorities and more women in senior-level positions in the tech field. And so, when you look at what the NFL has tried to do, the implementation of the Rooney Rule, in its inception, was well intentioned, but it hasn’t really — especially as of late, in the last four or five coaching cycles, it hasn’t really lived up to the billing of what the Rooney Rule was, what the Rooney Rule was for, and the legacy of Mr. Rooney.

AMY GOODMAN: If you could comment more on Brian Flores, son of Honduran immigrants, a Black Latinx former head coach, now fired head coach of the Miami Dolphins? He’s 40 years old, young, extremely successful coach. Are you and others afraid that he will face the same kind of blackballing — or should I say whiteballing — as the former quarterback Colin Kaepernick?

DONTÉ STALLWORTH: You know what, Amy? That seems to be what would probably happen. I would love for him to — he’s only 40 years old, in his coaching career. But he’s been in the league for a very long time. I was actually with him when I was a member of the New England Patriots. He worked his way up through the scouting department as a scout, in the personnel department, and then he became a coach. And he ended up, you know, assisting in one of the greatest Super Bowls that we’ve ever seen, when Malcolm Butler, at the end of the Super Bowl in Arizona, against the Seattle Seahawks, he made a great interception. Brian Flores was integral to that play happening. And that’s why he was able to get the head coaching job with the Miami Dolphins.

And speaking of the Miami Dolphins, you know, they haven’t been the greatest football team as of lately. And I believe, this century, you know, these 20, 22 years, that Brian Flores has been the most successful coach that they’ve had, and the most successful coach even in this coaching cycle that we’ve just had. And yet here he is on the sidelines, not participating as a head coach, but now filing a lawsuit because of what he alleges as discriminatory practices now.

We know that the NFL, again, hasn’t had the greatest record with their hiring practices. But I know the NFL has obviously tried to make efforts, and especially after the George Floyd, they were kind of pushed by the players to do more in the diversity field, to do more backing the players with human rights issues, different issues on race and things like that. So, the NFL is now in a position where they’re going to have to defend these claims against them. And I don’t know how well it’s going to go for Brian Flores. I wish him the best. He’s a great guy, a great coach, and he deserves an opportunity. He has worked and earned that opportunity. But the NFL is obviously going to dig its heels in.

And hopefully, at the end of this, Brian Flores can continue his coaching, but we can also see some changes in the NFL and in the Rooney Rule and maybe even revamp them and make more rules. But at the end of the day, Amy, these rules and these regulations are all tied to the owners. The decision-makers are the owners, are the team owners. And the responsibility for the diversity of the NFL essentially lies at the doorstep of these team owners.

AMY GOODMAN: By the way, the Miami Dolphins just announced that they have hired chief coach Mike McDaniel from the 49ers, who calls himself multiracial. I’m sure he has a lot to thank Flores for in that announcement, that’s coming right before the Super Bowl. Now, the NFL Commissioner Roger Goodell is going to give his State of the NFL address on Wednesday before the Super Bowl. What do you want to hear him say? What are your demands of him, Donté? We have a minute.

DONTÉ STALLWORTH: I would love to hear Roger speak more about what the NFL will do moving forward. We all know the record that the NFL has with hiring Black coaches in the past, even since the Rooney Rule has been implemented. I believe in 2006, there was the most Black head coaches at one point in the NFL. I believe there were six or seven Black head coaches. But their leash, so-called leash, on coaching, as a head coach, has been much shorter than their white counterparts. And that’s just a fact. I think we’ve all seen that.

So, at the end of the day, I would love to hear Roger get up there and talk about the steps that the NFL plans to move forward with, tangible results that we need to see from diversity in the NFL and, again, the NFL commissioner. But, essentially, the responsibility ultimately lies at the doorstep of the team ownership, who are the ones that are making the decision at the end of the day.

AMY GOODMAN: We want to thank you, Donté Stallworth, for joining us, sports commentator, former NFL player, who spent 10 years in the league, speaking to us from Amsterdam. He was in Paris on Friday.

That does it for our show. Democracy Now! currently is accepting applications for a human resources manager. Learn more and apply at democracynow.org. 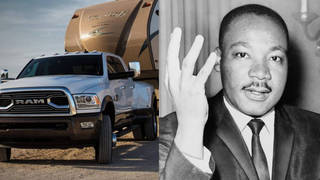