We discuss President Biden’s first State of the Union address with Jacobin magazine’s Branko Marcetic, who says Biden should have focused more of his speech on laying out goals to reach renewable energy independence since the continued reliance by the U.S. on the oil and gas reserves of countries like Russia and Saudi Arabia gives those countries “relative freedom” to commit war crimes on the world stage. He says the task ahead is to “both avoid military escalation” and “try and get a ceasefire agreed to as soon as possible.” Marcetic’s latest piece is headlined “Four Ways to Counter Russian Aggression That Don’t Risk Nuclear War.”

PRESIDENT JOE BIDEN: Tonight, I say to the Russian oligarchs and the corrupt leaders who bilk billions of dollars off this violent regime: No more. The United States — I mean it. The United States Department of Justice is assembling a dedicated task force to go after the crimes of the Russian oligarchs. We’re joining with European allies to find and seize their yachts, their luxury apartments, their private jets. We’re coming for you, your ill-begotten gains. And tonight I’m announcing that we will join our allies in closing off American airspace to all Russian flights, further isolating Russia and adding additional squeeze on their economy. He has no idea what’s coming.

AMY GOODMAN: That was President Biden delivering his State of the Union address, his first one.

To talk more about his remarks and the Russian invasion of Ukraine, we’re joined by two guests. Walden Bello, acclaimed Filipino scholar and activist who’s campaigning for vice president in the Philippines, he co-founded Focus on the Global South. He’s adjunct professor of sociology at the State University of New York at Binghamton. And Branko Marcetic, staff writer at Jacobin magazine, author of Yesterday’s Man: The Case Against Joe Biden. His latest piece is headlined “Four Ways to Counter Russian Aggression That Don’t Risk Nuclear War.”

Branko, why don’t you start there, four ways to counter Russian aggression that don’t include nuclear war? And also respond to the State of the Union by Biden, who you wrote a biography of.

BRANKO MARCETIC: Well, there is right now a very jingoistic attitude that has enflamed all over the world, including the United States. And at the moment, the only solutions that have been presented as feasible ways to end this war and to create some sort of stability and peace in Europe are military means, whether sending weapons into Ukraine that may end up in the hands of far-right forces there, whether that means reckless calls for a no-fly zone or even turning Ukraine into some sort of Afghanistan-like quagmire, which would be disastrous for the actual people of Ukraine.

What I have tried to suggest is other ways to respond to this, to not just show the world’s disapproval over this illegal and appalling invasion, but also to deter future such actions from any other states, whether it’s Russia or other authoritarian countries. One of the ways I think we need to talk about — and I was surprised that this was not mentioned in the State of the Union speech, because it is both an urgent security issue, in general, but also relates directly to Putin’s actions — is the need to aggressively move away from fossil fuels. The reason why the West has found it somewhat tricky to respond to Putin over the course of this crisis, and the reason why the West generally finds it difficult to respond to the various outrageous actions of countries like, say, Saudi Arabia, is because the continued reliance on fossil fuels to run our societies, to run our economies, means that we’re hamstrung. We rely, to a large extent, on the oil and gas reserves of countries like Russia, of countries like Saudi Arabia, and so it makes it very difficult to respond to them. And it also gives them relative freedom, or at least the belief that they have relative freedom, to act on the world stage in a variety of illegal ways.

So we really need to start talking about the need to aggressively invest in green energy. Germany has recently announced that they’re going to spend more than 2% of their GDP on defense in response to this. I think that’s going to be largely irrelevant, because when you’re dealing with a nuclear power, there’s only so much military buildup that you can have that will have an effect. They would do better, I think, to spend that money on moving their energy reliance away from fossil fuels and away from reliance on not just Russian oil and gas but the oil and gas of every other authoritarian petrostate that we currently rely on.

You know, another thing that I think both relates to this Ukrainian war, this war in Ukraine by Putin, and also the State of the Union and the pressing issues that are happening domestically in the United States is this war is going to — it is already causing a direct inflationary pressure in the United States and around the world, because oil is jumping. I know that the United States has released certain reserves of oil and gas, but nonetheless oil prices are going up. This is going to hit ordinary people particularly hard. It’s going to be bad domestically for Biden and the Democrats, who are already and were already struggling with the issue of inflation before this happened. And it won’t just be oil. Ukraine is a major wheat exporter. That means that it could cause pressure on a whole host of countries’ food supplies — say, in the Middle East — if this war is protracted or continues to destabilize their country.

So, you know, all of these were reasons why I had hoped, as this crisis was rolling through December, January, February, that what would happen, in accordance with the wishes and the calls from a variety of leading foreign policy voices, including Jack Matlock, the former ambassador to the Soviet Union, that there would be a diplomatic solution before a war was started, to prevent it from happening in the first place, because the war would not be good for anyone. Unfortunately, that did not happen. So I think now the task is to both avoid military escalation, avoid a wider conflict, avoid a catastrophic nuclear war, and try and get a ceasefire agreed to as soon as possible so that things can get back to some level of relative stability.

NEXTFilipino Scholar Walden Bello on Why the Global South Is Suspicious of U.S. Motives in Ukraine War 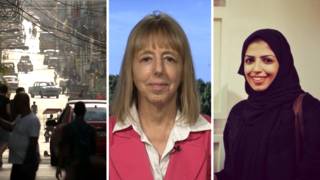