Russian Foreign Minister Sergey Lavrov has warned that if a Third World War were to take place, it would be a nuclear war. His comments come just days after Russian President Vladimir Putin ordered Russia’s nuclear forces on high alert and after Russian nuclear submarines set sail for tests in waters near Norway. Meanwhile, voters in Belarus have approved a referendum opening the door for Russia to station nuclear weapons in Belarusian territory, and Russia has called on the U.S. to remove its nuclear weapons from European soil. “We need to acknowledge that nuclear weapons are clearly not a cause of stability in the world, as we’re often told,” says Daniel Högsta, campaign coordinator for the Nobel Peace Prize-winning International Campaign to Abolish Nuclear Weapons. “They don’t deter conflicts; they in fact have the potential to exacerbate them.” Högsta also explains the dangers of imposing a no-fly zone in Ukraine despite Russia’s continued threats of using nuclear weapons, which he says amount to a kind of “nuclear blackmail.”

Russia’s Foreign Minister Sergey Lavrov has warned if a Third World War were to take place, it would be a nuclear war. His comments come just days after Russian President Vladimir Putin ordered Russia’s nuclear forces on high alert and after Russian nuclear submarines set sail for tests in waters near Norway. At the start of Russia’s invasion of Ukraine, Putin warned other nations not to intervene, saying, quote, “Russia will respond immediately, and the consequences will be such as you have never seen in your entire history,” Putin said. Meanwhile, voters in Belarus have approved a referendum opening the door for Russia to station nuclear weapons in Belarus. Meanwhile, Russia is calling on the United States to remove its nuclear weapons from European soil. The U.S. keeps nuclear weapons in five NATO countries: Belgium, Germany, Italy, the Netherlands and Turkey. On Wednesday, U.S. Secretary of State Tony Blinken addressed the growing fear of a nuclear war.

SECRETARY OF STATE ANTONY BLINKEN: As we’ve stated many times, including earlier this year, following the meeting between President Biden and President Putin in Geneva, both of our countries have stated that a nuclear war cannot be won and must never be fought. That was a key reaffirmation coming out of the meeting between President Biden and President Putin back in June. Provocative rhetoric about nuclear weapons is the height of irresponsibility. It’s dangerous. It adds to the risk of miscalculation. It needs to be avoided.

SECRETARY-GENERAL ANTÓNIO GUTERRES: This is a chilling development. The mere idea of a nuclear conflict is simply inconceivable. Nothing can justify the use of nuclear weapons.

AMY GOODMAN: Nuclear weapons have not been used since 1945, when the U.S. dropped atomic bombs on the Japanese cities of Hiroshima and Nagasaki. Earlier this week, Japan’s ambassador to the U.N. Conference on Disarmament warned against nuclear weapons ever being used again.

ICHIRO OGASAWARA: As the only country to have suffered atomic bombings during war, Japan is fully aware of the catastrophic humanitarian consequences of the use of nuclear weapons. We stress once again that such tragedy must never be repeated again.

AMY GOODMAN: We go now to Geneva, Switzerland, where we’re joined by Daniel Högsta. He is a campaign coordinator for the International Campaign to Abolish Nuclear Weapons, or ICAN, which won the Nobel Peace Prize in 2017.

Daniel, can you talk about what’s at stake right now, with President Putin now talking about putting his nuclear forces into special combat readiness?

I mean, Putin made clear that — threats already last week, and he ordered the holding of exercises of Russia’s nuclear weapons delivery systems shortly before the invasion again, which he actually personally oversaw. And then, of course, as you mentioned, came the order to increase the readiness level of the nuclear arsenal to high alert. So, these are clear signals of intent, and the risk is very real. But it’s also clear, as many have observed, that Putin is using the threat of nuclear weapons to intimidate others also away from interfering with Russia’s invasion and the humanitarian crisis it’s causing.

So, really, we need to acknowledge that nuclear weapons are clearly not a cause of stability in the world, as we’re often told. They don’t deter conflicts. They in fact have the potential to exacerbate them, in fact. And so, what we’re seeing now is that Russia is also using nuclear weapons as a kind of nuclear blackmail. And so, even if this doesn’t mean that we’re definitely on track for a nuclear weapons exchange in this crisis — and we do need to be mindful of not spreading panic — we do also have to acknowledge the risks that are inherent in this kind of signaling, which is what nuclear deterrence is all about.

There are lots of ways in which inadvertent nuclear escalation can happen. It could be a simple misunderstanding, an accident, a misinterpretation by Russia of an action made by a third-party government in Ukraine, or decision perhaps by Ukraine to raise the stakes even further to achieve some kind of short-term outcome through this nuclear blackmail. So, it’s also sensible, I should say — it’s also good that we saw from the other nuclear-armed states that they’re not responding in kind. That’s sensible. But we do have to acknowledge that when it comes to nuclear weapons, as always, we’re simply relying on luck in this crisis or another one. So, I think we do have to note that nuclear deterrence is fundamentally flawed and a dangerous system that we’re relying on, apparently.

DANIEL HÖGSTA: Yeah, exactly. Russia is estimated to have between — around 6,000, the biggest arsenal, as you mentioned. And now they’re, yeah, on high-alert status. So, I mean, it’s not clear — you know, as always with nuclear deterrence or this so-called policy of national security, it’s not clear how the nuclear weapons would be used. I mean, this ambiguity around it is also part of it. It’s part of what makes the threat credible for the nuclear weapon states, but also, of course, it’s what makes the crisis so dangerous, because the ambiguity and the lack of understanding what the other side is doing is part of nuclear deterrence.

AMY GOODMAN: Can you talk about a no-fly zone? Many Ukrainians are calling for this. They’re saying, “We’re not asking for you to send soldiers to Ukraine. Just stop the Russians from flying in and bombing us.” What is your concern about this?

DANIEL HÖGSTA: Well, I mean, the problem with a no-fly zone is very clearly that it would — it could lead to a direct conflict, could lead to Western governments shooting down a Russian airplane, and all of a sudden you’ve got direct conflict between nuclear-armed states. So, it could be extremely dangerous. It’s understandable why some are calling for it. But what we really need to avoid right now is a kind of direct open conflict between Russia and NATO, which could spin out of control, as I mentioned, into all-out nuclear conflict. So, it is quite a dangerous prospect or option, the idea of a no-fly zone.

NERMEEN SHAIKH: At the moment, of course, the Europeans and the Americans have made it clear that they will not impose a no-fly zone, though perhaps that could change. If you could respond to that, if you think that that’s likely, and also what you know of the back-channel negotiations between the Americans and the Russians on nuclear weapons?

DANIEL HÖGSTA: Right. I mean, I don’t think that it’s likely that a no-fly zone will be instituted. I think that the signals from Europe and the United States are very — are quite clear on that. And it seems right now that they are being very, very cautious, and rightfully so, in response to Russia’s nuclear threats. So, going from what they’re saying right now to a no-fly zone would be an escalation and clearly something that Putin and Russia would see as very, very inflammatory. So I don’t see that happening right now.

So what we really need is more commitment to this new treaty, the United Nations Treaty on the Prohibition of Nuclear Weapons, which entered into force in 2001 and is having its first Meeting of States Parties this year. And if any country is serious about the nuclear threat, they have to at least participate at that meeting and express their concerns, whether it be for the Russian nuclear weapons threat or the hosting of — potential hosting of nuclear weapons in Belarus or other actions like that.

AMY GOODMAN: What are the terms of the existing nuclear treaty between the U.S. and Russia, and NATO and Russia?

DANIEL HÖGSTA: Well, I mean, there is, of course, the — I mean, there is the NPT, but I think maybe you’re referring to the New START treaty. It’s due to expire shortly. I’m not sure the exact details of when that’s going to happen. So, of course, we have seen over the past few years a total disintegration of the multilateral architecture that’s meant to keep nuclear weapons in check. We saw the INF fail last year. And, of course, the NPT, the Nuclear Nonproliferation Treaty, is under incredible, incredible strain because of the non-implementation of its disarmament obligations.

So, really, we need to see more from the nuclear weapon states in terms of reducing the risks of use, but we also need to see a commitment from not only the nuclear weapon states but from all states to the Treaty on the Prohibition of Nuclear Weapons, which is the first treaty which fundamentally prohibits nuclear weapons and envisions a framework for their verifiable destruction. So, that’s something that not only the nuclear-powered states but also the states that host nuclear weapons, in particular, but also all states that are part of military nuclear alliances, need to participate at, if they’re really serious, if they’re really serious about nuclear disarmament and the threats we’re facing right now.

That does it for our show. Democracy Now! is currently accepting applications for a full-time human resources manager. Learn more and apply at democracynow.org. 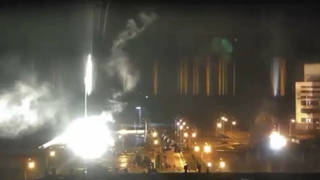