We speak with historian Tariq Ali about the ongoing war in Ukraine, where more than 4.5 million people have fled since the start of Russia’s invasion. Ali says the only peace settlement he sees working would be if Ukraine’s Donbas region “becomes some federated republic with Russia” while allowing the rest of Ukraine independence and neutrality. He also says the war should bring attention to Western-fueled wars in non-European countries like Yemen, where refugees are essentially blocked from escaping violence because of what Ali attributes to racism.

AMY GOODMAN: Tariq Ali, I wanted to ask you about Ukraine. You’re joining us from London, and on Saturday the British prime minister, Boris Johnson, made a surprise trip to Kyiv to meet with the Ukrainian President Volodymyr Zelensky, this coming as the U.N. says more than four-and-a-half million people have fled Ukraine since Russia’s invasion began 46 days ago, on February 24th — interestingly, the day that Imran Khan was meeting with Vladimir Putin at the Kremlin. Can you talk about this visit and, overall, what’s happening with the war?

TARIQ ALI: Amy, what is happening with the war, overall, is that Putin’s reckless adventurism has now hit a rock. The fact is that Putin had thought that half the population might be pro-Russia, but this has turned out to be completely inaccurate, and his intelligence chiefs are being punished for this sort of intelligence. They thought it would be a war that would be over quickly, that they would be welcomed by the population. That hasn’t happened.

So the choices now for Putin are limited: to carry on this war, to get bogged down in the Ukraine, or immediately propose some negotiated settlement. And the same applies to the other side. I think it would be wrong. Boris Johnson’s trip to Kyiv is designed to shore up the regime and to encourage, basically, a continuation and escalation of the conflict. In the middle of all this, the Ukrainian people suffering, targeted, dying, becoming refugees, their houses being bombed, buildings being bombed. So I ask: What is in the interests of the Ukrainian people as a whole? And the only thing they want is peace now. They don’t want a continuation of the war.

So, I think, ultimately, if NATO — Ukraine may not be in NATO, but NATO is definitely in the Ukraine, and Boris Johnson’s trip is a proof of that. But they need to reach a settlement. And the only settlement I can foresee is, effectively, the Donbas becomes some federated republic with Russia. The rest of the Ukraine is granted — is allowed its independence and its neutrality guaranteed by both sides. It should not become a NATO base on the edges of Russia. And whether this will happen remains and is dependent on both sides. Were that deal to be offered to Putin, I think given the opposition to the war inside Russia itself, which isn’t much spoken about but which is widespread, he would find it difficult to turn that down. But this time they will need written, iron guarantees for the Ukraine to become independent again.

Meanwhile, refugees, as you pointed out, are flowing from the Ukraine to different parts of Europe. But, Amy, it’s also worth pointing out another thing which it’s difficult not to remark on. There are other wars going on. The war in the Yemen has cost nearly half a million lives, has unleashed epidemics like cholera. Malnutrition affects 70 to 80% of the people. Where are their refugees going? Nowhere, because no one will take them. So they stay in the country, and they carry on dying. And there is a feeling one gets that the Europeans, in particular, are more sympathetic to the Ukrainians because they’re the same color. They have blue eyes and blond hair, and they are acceptable refugees, whereas the other wars, not waged by Putin but by the West, either directly or through proxies, are creating havoc in parts of the world. And I think we should be equidistant from both sides in the Ukraine but also be critical of what is happening elsewhere.

The sooner this war is brought to an end, the better for everyone. It was a disaster for Russia. And how long Putin will survive after the war is over and some deal is sorted out, I don’t know. Pentagon remarks that this war could go on a long time are not helpful to anyone. We don’t want another 20-year war like we’ve had in Afghanistan recently.

AMY GOODMAN: Well, Tariq Ali, I want to thank you for being with us, historian, activist, filmmaker and author, and Tooba Syed, for joining us from Islamabad, Pakistani activist, member of the left-wing Awami Workers Party, socialist feminist.

Next up, we go to France, where President Emmanuel Macron is headed to a runoff election with the far-right candidate, Marine Le Pen. Stay with us. 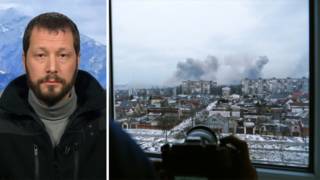