The January 6 committee released new footage Thursday night showing a detailed timeline of the day of the insurrection. We feature the video they played that shows how Proud Boys and Oath Keepers marched from the National Mall — where Donald Trump delivered a speech pressuring Mike Pence to recertify the election results to deliver him a victory — to the Capitol Building to chants of “Hang Mike Pence,” before they violently pushed through police barriers and broke into the government building chanting “Nancy.”

AMY GOODMAN: During the hearing, an extended clip was aired documenting minute by minute what happened on January 6th. It began at 10 a.m., when members of the Proud Boys gathered on the National Mall in Washington.

POLICE OFFICER: Yeah, just for awares, be advised there’s probably about 300 Proud Boys that are marching eastbound in this 400 block of kind of Independence, actually on the Mall, towards the United States Capitol.

PROUD BOY: We all are on your side! Don’t make us go against you! [bleep] These are our streets!

AMY GOODMAN: 11:48 a.m., Proud Boys stop for photo in front of the east side of the Capitol.

PRESIDENT DONALD TRUMP: I hope Mike is going to do the right thing. I hope so. I hope so.

PRESIDENT DONALD TRUMP: Because if Mike Pence does the right thing, we win the election. … All Vice President Pence has to do is send it back to the states to recertify, and we become president, and you are the happiest people. … Mike Pence is going to have to come through for us. And if he doesn’t, that will be a sad day for our country, because you’ll never take back our country with weakness. You have to show strength, and you have to be strong.

POLICE OFFICER: Cruiser 50, it does look like we’re going to have an ad hoc march stepping off here. There’s a crowd surge heading east.

PRESIDENT DONALD TRUMP: And if you’re not, I’m going to be very disappointed in you, I will tell you right now.

POLICE OFFICER: Cruiser 5 to 50, be advised, Capitol Police 1 advised they’re trying to breach and get into the Capitol.

POLICE OFFICER: 22, we’re about five minutes out. We’re trying to make our way through all this.

DISPATCHER: Jack, be advised they’re requesting additional resources on the east side as they have broken into that window and they’re trying to kick it in.

CHAIR: Without objection, the chair declares the House in recess, pursuant to Clause 12(b) of Rule 1.

TRUMP SUPPORTER: “Mike Pence didn’t have the courage to do what should have been done to protect our Country and our Constitution, giving States the chance to certify a corrected set of facts, not the fraudulent or inaccurate ones which they were asked to previously certify. USA demands the truth!”

AMY GOODMAN: Crowd chants, “Hang Mike Pence!” There is a hangman’s noose outside.

POLICE OFFICER: We need an area for the House members. They’re all walking over now through the tunnels.

AMY GOODMAN: Police are being attacked outside.

POLICE OFFICER: [inaudible] with the four members. The door is barricaded. There’s people flooded the hallways outside. We have no way out.

POLICE OFFICER: Evac officers still remaining on the House floor, on the third floor, to use the — separate themselves and timely evacuate so we can secure the members on the other side. Copy.

TRUMP SUPPORTER: It’s up to us people now, the American people.

INTERVIEWER: And what are you ready to do?

INTERVIEWER: What are you ready to do?

TRUMP SUPPORTER: Whatever it takes. I’ll lay my life down, if it takes.

TRUMP SUPPORTER: Absolutely. That’s why we showed up today.

PRESIDENT DONALD TRUMP: They were peaceful people. These were great people. The crowd was unbelievable. And I mentioned the word “love.” The love, the love in the air, I’ve never seen anything like it.

AMY GOODMAN: That was a video of the January 6th insurrection aired during Thursday’s House select committee, the first of a series of public hearings. The next is Monday morning. 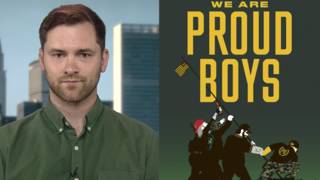