The House committee investigating the January 6 insurrection held its second public hearing Monday. Video testimony was aired of numerous Trump White House insiders saying there was no basis to Donald Trump’s claims the election was stolen. Former Attorney General William Barr said Trump was “detached from reality” for refusing to accept his election loss. The committee also revealed that Trump heavily relied on far-fetched claims by his lawyer Rudolph Giuliani, who was reportedly drunk on election night when he pushed Trump to falsely claim victory.

“The Big Lie Was the Big Ripoff”: Jan. 6 Panel Accuses Trump of Ripping Off Donors 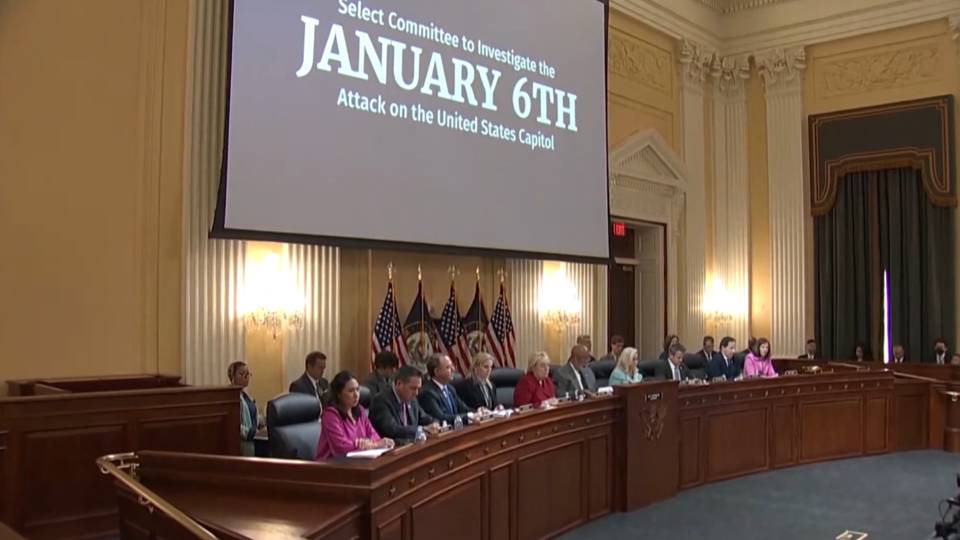 The House Select Committee to Investigate the January 6th Attack also examined how Trump’s campaign raked in over $250 million in donations from his supporters after the election for an election defense fund that didn’t exist. This is committee member Congressmember Zoe Lofgren.

Rep. Zoe Lofgren: “Throughout the committee’s investigation, we found evidence that the Trump campaign and its surrogates misled donors as to where their funds would go and what they would be used for. So not only was there the big lie, there was the big ripoff.” It’s Primary Day in Maine, Nevada, North Dakota and South Carolina. In Nevada, Republican voters will be deciding who will challenge Democratic Senator Catherine Cortez Masto in November in a race that could decide who controls the Senate. The Republican Senate race pits former Nevada Attorney General Adam Laxalt against retired Army Captain Sam Brown. Laxalt is a close ally of Donald Trump who supported Trump’s efforts to overturn the 2020 election. A number of other Republicans who supported Trump’s coup attempt are also on the ballot today.

Study: 338,000 Lives Would Have Been Saved During Pandemic If U.S. Had Universal Healthcare System 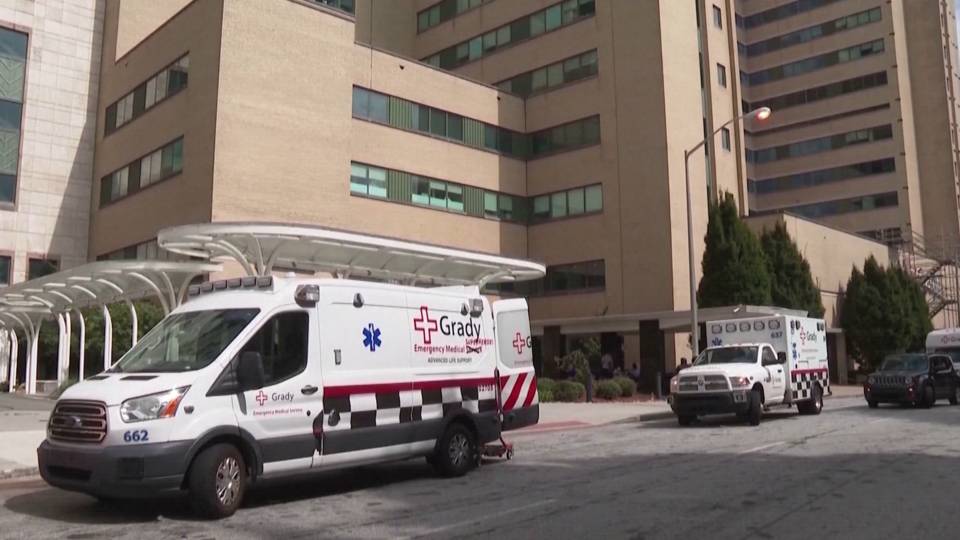 The lives of 338,000 people who died of COVID-19 could have been saved if the United States had a universal healthcare system. That’s the finding of a new study published in the Proceedings of the National Academy of Sciences of the United States of America. The study also estimates a universal healthcare system would have saved the United States $459 billion in healthcare costs in the year 2020. The study’s lead author, Alison Galvani of the Yale School of Public Health, told Scientific American, “Medicare for All would be both an economic stimulus and life-saving transformation of our health care system. It will cost people far less than the status quo.” A new study funded by the National Institutes of Health has concluded ivermectin is not effective at treating COVID-19. The study was conducted by researchers at Duke and Vanderbilt Universities. The United Kingdom is expected to begin flying asylum seekers to Rwanda today as part of a new immigration policy widely decried by religious leaders and human rights groups. The U.K. plans to send asylum seekers to Rwanda who have crossed the English Channel into Britain, regardless of where they came from originally. Leaders in the Church of England have condemned what they described as an “immoral policy that shames Britain.” On Monday, Filippo Grandi, the U.N. high commissioner for refugees, also criticized the plan.

Filippo Grandi: “The precedent that this creates is catastrophic for a concept that needs to be shared like asylum. … We believe that this is all wrong. This is all wrong, this deal, for so many different reasons, and I can enumerate a few.” In eastern Ukraine, Russian forces have destroyed the last bridge connecting Severodonetsk to other areas under Ukrainian control as heavy fighting continues in the city. Ukraine is calling on Western nations to provide far more in heavy arms. On Monday, Ukraine requested 300 rocket launchers, 500 tanks and 1,000 howitzers. This comes as Russia has begun issuing passports in some areas it is occupying in eastern Ukraine as Russia attempts to solidify its rule in the region. Meanwhile, Russia is accusing Ukraine of firing NATO-supplied artillery on a market in a Russia-controlled area of Donetsk, killing three people, including a child. Authorities in India have demolished the homes of several Muslim activists who organized protests last week triggered by recent anti-Islamic comments made by two members of Prime Minister Narendra Modi’s Hindu nationalist BJP party. The demolitions took place in the northern Indian state of Uttar Pradesh. Police also shot dead two teenage Muslim protesters. Hundreds of Muslims have been arrested. The Indian journalist Rana Ayyub tweeted, “The Modi government has never sent a more chilling message to its Muslim minorities. Speak up, protest and you will be jailed, booked for terrorism, your houses demolished, shot in public with no semblance of law and judiciary.” A number of Muslim countries have also lodged protests over India’s treatment of its Muslim population and recent statements by Hindu officials insulting the Prophet Muhammad.

Israel Is Suspected in Poisoning Deaths of Two Iranian Scientists Iran suspects Israel is responsible for poisoning two Iranian scientists who recently died within days of each other in separate cities after apparent food poisoning. The New York Times reports one of the scientists worked at an Iranian military research center. The other was a geologist who, according to some press accounts, may have worked at Iran’s Natanz nuclear facility. Israel is also believed to be behind last month’s drone attack on an Iranian military site that killed a young Iranian engineer who worked for Iran’s Ministry of Defense.

Over 100 Million Put Under Heat Advisories Amid Record-Breaking Heat Wave in U.S. 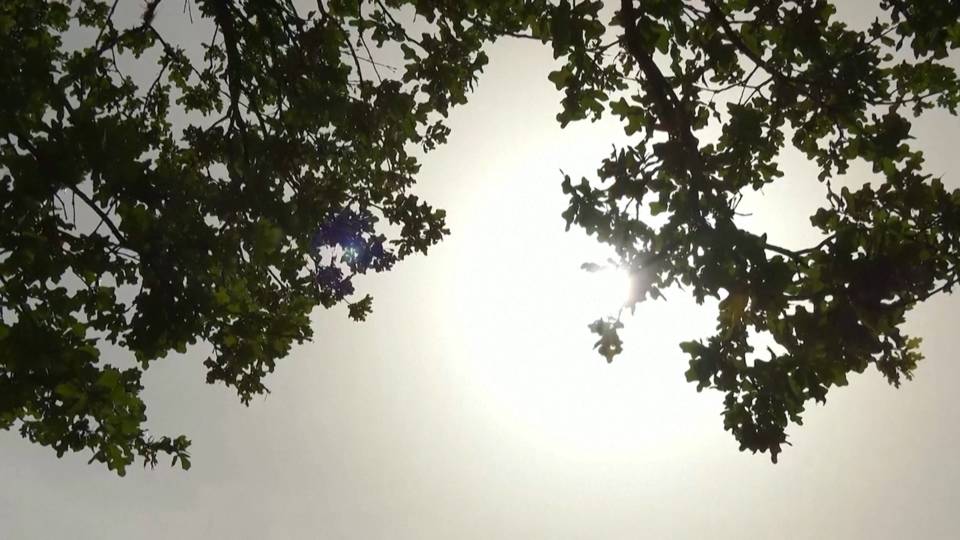 Over 100 million people are under heat advisories in the United States as an early-season heat wave continues to break records from the Southwest to the Gulf Coast to the Great Lakes. Over the weekend, temperatures in Phoenix, Arizona, reached 114 degrees and 109 degrees in Las Vegas, Nevada. In Houston, local officials warned residents to stay inside.

Porfirio Villarreal: “When you have extreme heat, then everyone is at danger. When you suffer heat exhaustion or heat stroke, then your vital organs, your brain suffers damages, and you could die.”

This comes as wildfires have forced hundreds of people to evacuate their homes in California, New Mexico and Arizona. According to the National Interagency Fire Center, firefighters are battling more than three dozen uncontained fires. 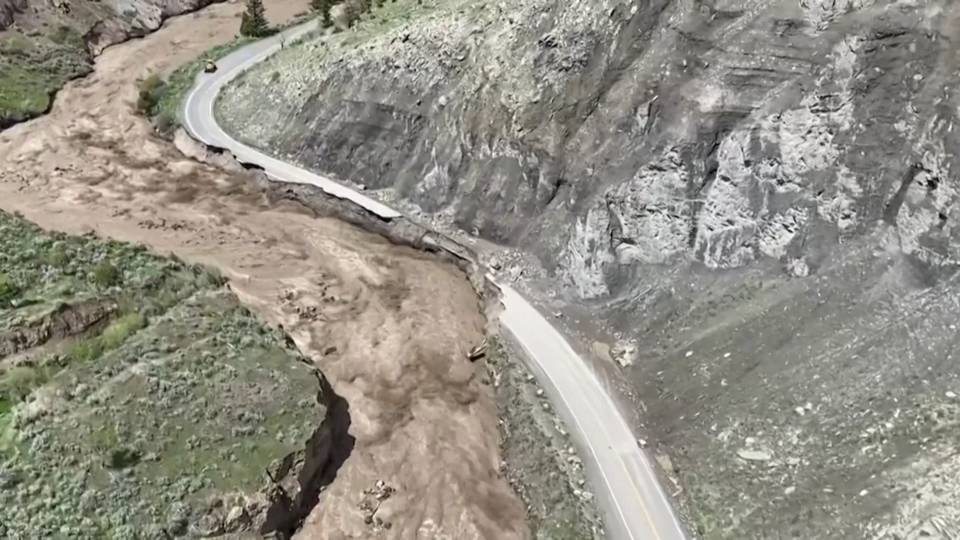 In Montana, record flooding has forced the closing of all five entrances to Yellowstone National Park. Roads and bridges in the area have been washed away, and some visitors are stranded in the park following “unprecedented” rainfall. Flood levels on the Yellowstone River are now beyond record levels. In some areas, the river is two feet higher than previous records. Scientists have long warned the climate emergency will lead to an increase in the number and severity of heat waves, wildfires and storms. 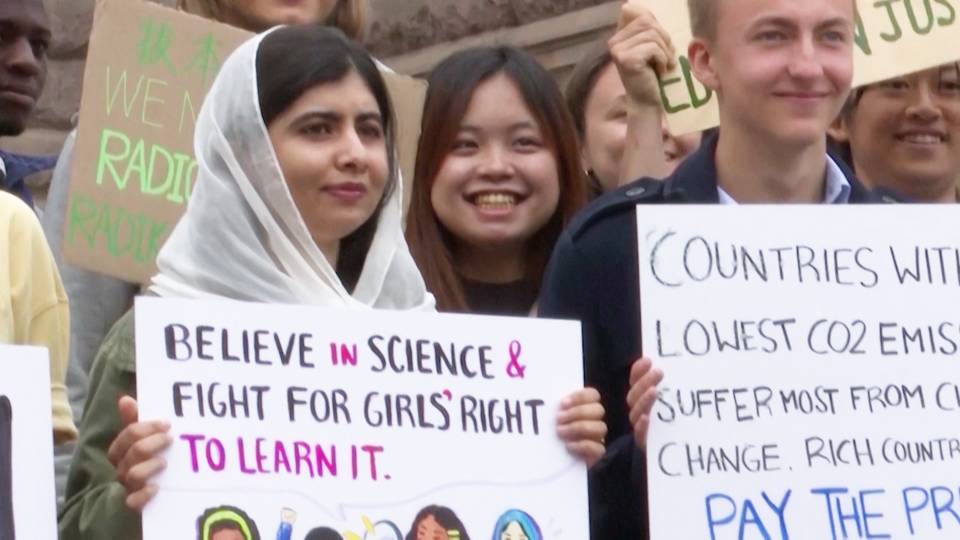 The Nobel Peace Prize laureate Malala Yousafzai joined with youth climate activists Greta Thunberg and Vanessa Nakate on Friday in a protest outside the Swedish parliament. Yousafzai talked about how the climate emergency is impacting girls across the globe.

Malala Yousafzai: “Due to climate-related events, millions of girls lose their access to schools. Events like droughts and floods impact schools directly. Displacements are caused due to some of these events. And because of that, girls are impacted the most. They’re the first ones to drop out of schools and then the last ones to return, as well.” In Ohio, Republican Governor Mike DeWine has signed a bill to make it easier for teachers and staff to carry guns in school. Under the new law, teachers and staff will need just 24 hours of training — down from 700 hours. Teacher unions and the Fraternal Order of Police of Ohio have opposed the new law. The Supreme Court issued two rulings on Monday which will make it much harder for people in immigration custody to challenge their detention. In one case, the court ruled that noncitizens who have been held for more than six months in immigration custody are not entitled to bond hearings. Justice Sonia Sotomayor wrote the majority opinion. In a second related case, the court ruled that jailed immigrants cannot come together to file class-action lawsuits to demand periodic bond hearings. But in this case, Sotomayor wrote a partial dissent, noting, “Today’s holding risks depriving many vulnerable noncitizens of any meaningful opportunity to protect their rights.” Police officers in Idaho have reportedly received death threats after arresting 31 members of the white supremacist organization known as the Patriot Front, who are accused of plotting to start a riot at a gay pride event in the city of Coeur d’Alene. The white supremacists were found packed in the back of a U-Haul truck armed with riot gear including a smoke grenade and shields. On Monday, the Patriot Front members were released on bail, which was set at $300 per person.

Doctors Call on U.K. to Block Extradition of Julian Assange to U.S. A group of more than 300 doctors from around the world are calling on U.K. Home Secretary Priti Patel to block the extradition of Julian Assange to the United States. In a letter to Patel, the group known as Doctors for Assange says the WikiLeaks founder suffered a mini stroke last October and that his overall health is continuing to deteriorate in prison. The doctors write, “The extradition of a person with such compromised health, moreover, is medically and ethically unacceptable.” Patel is expected to rule on Assange’s extradition by Friday.

Conflicting Reports Emerge from Brazil on Search for Missing Men There are conflicting reports out of Brazil about the search for the missing British journalist Dom Phillips and the Brazilian Indigenous expert Bruno Araújo Pereira. The pair went missing over a week ago in one of Brazil’s most remote areas of the Amazon. On Monday, the family of Phillips said they were notified by the Brazilian Embassy in London that two bodies tied to a tree were found during the search operation. However, the Federal Police in Brazil and Indigenous activists aiding the search have said no bodies have been found. The search is focused on a remote area where authorities found personal items belonging to the two men on Saturday.