The House of Representatives on Wednesday approved new gun control measures, including raising the minimum age for the purchase of most semiautomatic rifles to 21 and banning high-capacity magazines. The new rules passed the House in a 223-204 vote, but are doomed in the Senate, where a bipartisan group is working on passing a much more limited set of reforms. The vote took place after a House committee heard harrowing testimony from people affected by recent gun violence, including an 11-year-old survivor of the Uvalde school massacre who watched her classmates get killed. “I grabbed a little blood, and I put it all over me’,” Miah Cerrillo told lawmakers in her testimony. “And then I grabbed my teacher’s phone and called 911.” We feature excerpts of Cerrillo’s testimony, along with the parents of 10-year-old victim Lexi Rubio and Dr. Roy Guerrero, Uvalde’s only pediatrician.

We turn now from Ukraine to the voices of survivors of gun violence who testified Wednesday here in the United States on Capitol Hill, before the House approved a package of limited gun reforms that’s virtually certain to fail in the Senate, where Republicans have promised a filibuster. The House approved the reforms after lawmakers heard hours of harrowing testimony about the mass shootings in Buffalo, New York, and Uvalde, Texas. Kimberly Rubio testified alongside her husband Felix, describing the morning of the massacre at Robb Elementary School before her 10-year-old daughter Lexi was killed, one of 19 children and their two teachers who died that day.

KIMBERLY MATA-RUBIO: On the morning of May 24th, 2022, I dropped Lexi and Julian off at school a little after 7 a.m. My husband and I returned to the campus at 8 a.m. for Julian’s award ceremony and again at 10:30 a.m. for Lexi’s award ceremony. Lexi received the good citizen award and was also recognized for receiving all As. At the conclusion of the ceremony, we took photos with her, before asking her to pose for a picture with her teacher, Mr. Reyes. That photo, her last photo ever, was taken at approximately 10:54 a.m.

To celebrate, we promised to get her ice cream that evening, told her we loved her and we would pick her up after school. I can still see her walking with us toward the exit. In the reel that keeps scrolling across my memories, she turns her head and smiles back at us to acknowledge my promise. And then we left. I left my daughter at that school, and that decision will haunt me for the rest of my life. …

Somewhere out there, there is a mom listening to our testimony, thinking, “I can’t even imagine their pain,” not knowing that our reality will one day be hers, unless we act now.

AMY GOODMAN: That’s Kimberly Rubio, testifying about her 10-year-old daughter Lexi, who was killed. She writes for the local newspaper the Uvalde Leader.

Also testifying at Wednesday’s congressional hearing was 11-year-old fourth grader Miah Cerrillo, who survived the mass shooting at Robb Elementary and told the panel, after the shooter murdered her teacher and friends, she covered herself in her friend’s blood in case the murderer returned.

MIAH CERRILLO: She went to go lock the door, and he was in the hallway, and they made eye contact. And then she went back in the room, and she told us, “Go hide.” And then we went to go hide behind the teacher’s desk and behind the backpacks. Then he shot the little window. And then he went to the other classroom, and then he went — there’s a door between our classrooms, and he went through there and shot my teacher and told my teacher “good night” and shot her in the head. And then he shot some of my classmates and the whiteboard. When I went to the backpacks, he shot my friend that was next to me. And I thought he was going to come back to the room, so I grabbed a little blood and I put it all over me. And —

MIGUEL CERRILLO: What did you do then, when you put the blood on yourself?

MIAH CERRILLO: Just stayed quiet. And then I got my teacher’s phone and called 911.

MIGUEL CERRILLO: What did you tell 911?

MIAH CERRILLO: I told her that we need help and to send the police in our classroom.

MIGUEL CERRILLO: If there was something that you want people to know about that day and about you — right? — or things that you want different, what would it be?

MIAH CERRILLO: To have security.

MIGUEL CERRILLO: Do you feel safe at school?

MIGUEL CERRILLO: Why not?

MIAH CERRILLO: Because I don’t want it to happen again.

MIGUEL CERRILLO: Do you think it’s going to happen again?

And this is Dr. Roy Guerrero, the only pediatrician in Uvalde, Texas, who testified about arriving at the hospital to treat the victims of the shooting. When he saw one of his longtime patients alive, he went outside to tell her parents. That’s when they asked him about their other child who was a student at Robb Elementary. Dr. Guerrero described what happened when he went back to check.

DR. ROY GUERRERO: As I made my way there, I prayed that I wouldn’t find her. I didn’t find Elena. But what I did find was something no prayer will ever relieve: two children whose bodies had been pulverized by bullets fired at them, decapitated, whose flesh had been ripped apart, that the only clue as their identities was the blood-splattered cartoon clothes still clinging to them, clinging for life and finding none. I could only hope these two bodies were a tragic exception to the list of survivors. But as I waited there with my fellow Uvalde doctors, nurses, first responders and hospital staff for other casualties we hoped to save, they never arrived. All that remained was the bodies of 17 more children and the two teachers who cared for them.

AMY GOODMAN: Dr. Roy Guerrero, the only pediatrician in Uvalde, Texas, testifying before the House on Wednesday. The Senate is weighing whether they will pass any gun reform bills.

Next up, we’ll speak with the head of Right Wing Watch about what to expect at this first public hearing tonight of the House committee investigating Donald Trump’s attempt to overturn the 2020 election and the deadly January 6th insurrection. Stay with us.

NEXTJan. 6 Hearings to Open as Proud Boys Members Are Indicted for Seditious Conspiracy 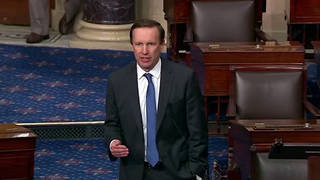