Hundreds of farmworkers concluded a 24-day march to Sacramento spanning 335 miles to demand California Governor Gavin Newsom support legislation that would make it easier for farmworkers to cast their ballots in union elections by mail. Newsom has threatened to veto the bill, which would keep farmworkers safe from employer retaliation, explains Teresa Romero, president of the United Farm Workers, the labor union that helped organize the march. We also speak with Irene de Barraicua, operations director of Líderes Campesinas, who describes the ongoing threats women agricultural workers and others face on the ground, including sexual harrassment, wage theft and exposure to toxic chemicals.

California Governor Gavin Newsom has threatened to veto a bill that would make it easier for farmworkers to cast their ballots in union elections by mail. Newsom made the announcement Friday as hundreds of farmworkers concluded a 335-mile, 24-day march to Sacramento to pressure Newsom to support the bill. Participants in the march included Audelia Garcia of the group Líderes Campesinas and the farmworker Virginia Maldonado.

VIRGINIA MALDONADO: [translated] I have been working in the fields for six years. I march because without this law passing, it is difficult for us to exercise our rights. The governor should know that we are essential for our work in the fields.

AUDELIA GARCIA: [translated] Good afternoon. My name is Audelia Garcia, and I represent Líderes Campesinas in California and Alianza Nacional de Campesinas. We defend the rights of farmworkers. We want farmworkers and agricultural workers to have the same rights.

AMY GOODMAN: The march was organized in part by the United Farm Workers. The labor union is planning to begin a 24-hour vigil today in Sacramento to pressure the governor to sign the legislation. Newsom has not ruled out signing a revised version of the bill, but his office said, quote, “We cannot support an untested mail-in election process that lacks critical provisions to protect the integrity of the election.”

The governor announced the veto on Friday, the same day the wine company he co-founded with the billionaire Gordon Getty announced it had just purchased a $14.5 million vineyard in Napa County.

We’re joined now by two guests. Teresa Romero is president of the United Farm Workers, and Irene de Barraicua is the director of operations and communications for Líderes Campesinas, or Farmworker Leaders, which works with female farmworkers.

We welcome you both to Democracy Now! Irene, let’s begin with you. If you can talk about why so many hundreds of people, led by farmworkers, marched for hundreds of miles to the California capital, what this bill is that you’re demanding be passed?

IRENE DE BARRAICUA: Hello. Good morning, Amy. And thank you for having me.

And definitely, after the past two years of this pandemic — right? — where farmworkers were deemed essential, many of the issues that farmworkers have faced for many years have been brought to light at a global level. And so, many of the farmworkers also understand that their voice means so much, they need to lift their voices.

And so, this march, what it represents is sort of this ongoing fight to obtain the rights that they’ve never had. I mean, they are some of the most at-risk workers. They risk injury more than any other labor sector. They are exposed to pesticides, to sexual assault, to wage theft, all sorts of abuses that one cannot imagine. And so, what this march meant was actually getting to that point where they have access to these rights, the rights to freely organize, like nurses do, like teachers do, like all other sectors of our labor, right? This is a $50 billion industry that the agricultural workers contribute to in California alone. And so, what it represents is basically opening that door to be able to organize freely, more freely, and exercise their right.

AMY GOODMAN: We’re also joined by Teresa Romero, who is president of the United Farm Workers. So, you arrive in Sacramento, the capital, with hundreds of farmworkers. And at the same time, you get the message from the governor that he will not sign this legislation. The Legislature will pass it, but he won’t sign it — he vetoed it last year — unless it’s amended. And then, at just about the same time, the [San Francisco] Chronicle releases this piece on his company buying up another — another vineyard in Napa.

AMY GOODMAN: The significance of this, Teresa?

TERESA ROMERO: You know, unfortunately, it was a big confusion, because then he said that he had not indicated he was not going to sign it. We have been in communication with his office since we started the march. Like you said, we marched 335 miles. On Friday, we had thousands of people join us at the Capitol. And what we want to make sure is that farmworkers have the ability to vote for union representation in a safe way. Right now if farmworkers organize, they’re fired, they’re deported. They have been deported. And there is an attorney that is known for calling immigration so the farmworkers are deported. Our farmworkers have worked from the pandemic — through the pandemic, through high temperatures, through pesticides, through fires. And it is time that we treat them as the essential workers that they really are.

AMY GOODMAN: I mean, talk about the heat wave, just your marching alone through the Central Valley in California, this many-day march, the dedication that it took. But can you also link — I mean, on the one hand, I think there was probably the embarrassment of it coming out about his vineyard, another vineyard purchased, at the same time as he’s saying he wants to amend this. Are you in negotiations? And what do you say to a governor who succeeded in defeating a recall? Many of the people who voted for him, to keep him, voted by mail. So many people, and overwhelmingly, I think, Democrat, use the mail in regular elections. What’s your response to limiting it when it comes to the United Farm Workers voting for unionization by mail, and why mail is so important to you?

TERESA ROMERO: You know, it is a double standard. What works for him, he doesn’t seem to believe that it works for farmworkers.

Farmworkers, right now the only way that they can vote for union representation is at the employer’s premises. And, you know, the supervisors are there. The foremen are there. In many cases, they have, quote/unquote, “security.” So, it is very intimidating for farmworkers. A lot of them are undocumented, so they prefer not to show up.

So, we want to improve participation. We want to give them the options of voting for union representation. If they do it from the comfort of their own home, and then they either deliver their ballot directly, if that’s what they want, or mail it, they’re safe from retaliation, because nobody is going to know even if they voted.

And we had farmworkers join us in this 24-day march who work for union companies, but they’re doing it because they know what other farmworkers go through and how intimidating. Just think about it. In many cases, you have several family members working in the same farm. If one of them starts organizing or asking for their rights, then not only that person is fired, but the entire family members are fired. So they risk a lot just saying that they want union representation.

AMY GOODMAN: Irene de Barraicua, can you talk about the conditions on the ground, even further, that farmworkers face, and particularly women?

IRENE DE BARRAICUA: Yes. So, what Líderes Campesinas is, we’re composed of women farmworker leaders, victim advocates. And so, usually what we see is a tremendous fear of women that face sexual assault, harassment in the field, and they’re scared to report. And as Teresa mentioned, many times the retaliation is the biggest fear, and deportation, right? So, many of the women stay quiet. They don’t say anything. They may be getting harassed by supervisors, co-workers. And many times even the men that witness this have come to us to report these things, but they are also fearful themselves of getting in trouble, of getting fired, of losing their job.

We see a lot of wage theft claims. Many of these people don’t know how to go through these processes, right? They don’t have language access, technology at times, to be able to make reports. And so, many times Cal/OSHA has brought to the attention that there’s a lot of advocates maybe that speak of complaints and such, but that the written official complaints are not in their system. And so that’s a very big problem, is very low reporting of what’s happening in the fields.

We see a lot of exposure to pesticides. There’s pesticides being sprayed at the time that people are working out there, when that should be — there should be an alert system, right? People should not be working for several hours when pesticides are being sprayed.

And so, definitely various things, also related to the heat, the fires. There’s evacuation zones where farmworkers are actually being brought in to finish the harvest, especially in places where Newsom has a winery, in Sonoma County, right? Napa. And definitely, many of these issues are not being addressed the way that they should.

AMY GOODMAN: Teresa Romero, we just have 30 seconds. Are you negotiating behind the scenes with the governor? And is it possible — I mean, I think all legislation has to be on his desk, what, by September 1st — that it could happen this term?

AMY GOODMAN: Teresa Romero, I want to thank you for being with us, president of the United Farm Workers, and Irene de Barraicua of Líderes Campesinas, which works with female farmworkers.

That does it for our show. In breaking news, NASA has scrubbed its planned launch of its new moon rocket, the Space Launch System, which was scheduled to lift off from Florida’s Kennedy Space Center this morning.

That does it for our show. Democracy Now! currently accepting applications for a people and culture manager. Check democracynow.org. I’m Amy Goodman. Thanks for joining us. 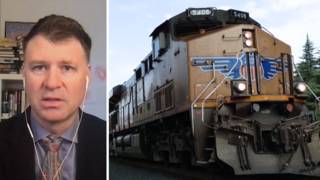