We continue to remember the life and legacy of writer and activist Barbara Ehrenreich, who died on September 1 at the age of 81, as we speak with her friend and colleague Alissa Quart, executive director of the Economic Hardship Reporting Project, which Ehrenreich founded and which continues to support journalists who cover and embody the struggles of everyday people. “She understood that on a basic level people just needed higher wages and more money, basically, and to make this into a moral or personal vendetta against the poor was an obscenity,” says Quart. Ehrenreich was the author of more than 20 books, including her best-known, “Nickel and Dimed: On (Not) Getting By in America.”

AMY GOODMAN: “All That You Have Is Your Soul” by Tracy Chapman. The late journalist Barbara Ehrenreich, who we’ll talk about next, wrote in her book Nickel and Dimed, “I finish up every night at 10:00 or 10:30, depending on how much side work I’ve been able to get done during the shift, and cruise home to the tapes I snatched at random when I left my real home — Marianne Faithfull, Tracy Chapman, Enigma, King Sunny Adé, Violent Femmes — just drained enough for the music to set my cranium resonating, but hardly dead.” This is Democracy Now!, democracynow.org. I’m Amy Goodman, with Juan González.

We end today’s show continuing to remember the life and legacy of the author and activist Barbara Ehrenreich, who died this weekend at the age of 81. She wrote more than 20 books, including her best-known, Nickel and Dimed: On (Not) Getting By in America, for which she went undercover as a low-income worker.

This is an excerpt of a 2006 address by Barbara. She gave it at the 20th anniversary of the media watch group FAIR. That’s Fairness & Accuracy in Reporting. She was in Cooper Union’s historic Great Hall.

BARBARA EHRENREICH: But I think the real issue here is the mainstream media’s, corporate media’s theory of poverty, which they can’t help but come back to, is that it is a character failure, it is manifested by laziness or promiscuity or addiction or something. Well, there’s an alternative theory of poverty that some of us have been trying to get across, which is that it’s not a character flaw, it is a lack of money. And I think, you know — and that it’s caused, you know, ultimately, by the pathetically low wages so many Americans earn.

AMY GOODMAN: That is Barbara Ehrenreich in 2006. Again, in Nickel and Dimed, she went and worked at Walmart. She was a waitress and had other jobs. She later founded the Economic Hardship Reporting Project, which is still going strong. For more, we’re joined by its executive director, Alissa Quart, Barbara’s close friend and colleague.

Welcome to Democracy Now! First off, Alissa, our deepest condolences to you, to Ben Ehrenreich, Barbara’s son, for the loss of this remarkable woman.

ALISSA QUART: Thank you so much, Amy. It has been really devastating. We loved her very much. But we hope to continue the fight in her name.

AMY GOODMAN: So, talk about what the Economic Hardship Reporting Project is. Talk about what it means to report on poverty, and what is lacking in the corporate media.

ALISSA QUART: So, Barbara once wrote, “In America, only the rich can afford to write about poverty.” And so, that meant you had, in the ’90s and the ’00s, columnists and pundits tossing off columns about so-called deadbeat dads detached from their second homes, right? What she wanted was she wanted to see people who were up close to the experience, who had — themselves either had grown up working poor or were still working in factories, and were professional journalists, as well. And also she wanted to see professional journalists spend weeks, months, years reporting from the frontlines of economic jeopardy. So, that is what the Economic Hardship Reporting Project does. We give people grants, and we give them editorial support, so they can continue in this legacy.

JUAN GONZÁLEZ: And could you talk also about — I mentioned in our show yesterday that Barbara started working really as a critic and analyst of the health industry in America and the enormous profit drive of our health industry. I’m wondering your conversations that you had with her in recent years about the impact of our health system on the poor.

ALISSA QUART: Well, yeah, I mean, she was — again, she thought debt caused by health expenses was another way that stigma was put onto poor people, that should have gone into creating a better structure, system of care for all. And so, that was just a — it was another place. And also, honestly, her own journey through healthcare in her later years, you know, she’d say things to me — she was very funny — like, “The thing about getting old is that doctor’s offices are just so boring.” You can’t underestimate her humor about herself and the world at large.

JUAN GONZÁLEZ: And most people are not aware she was a democratic socialist. I’m wondering your thoughts about —

JUAN GONZÁLEZ: — her legacy in terms of the work that she did over the years on behalf of working people in America.

ALISSA QUART: Yeah. I think it’s really important to think of her as a journalist and an activist. She didn’t necessarily see the bright line that other kind of so-called great journalists tend to see, right? That in the mainstream media, you’re not supposed to have a take or an opinion or a voice. She thought the opposite was true, that you needed to have people who are able to speak truth to power contributing to all of the conversations. So, she was co-chair, actually, of the DSA in early years, and it’s really important to recognize that. She was also part of women’s movements, labor movements. She felt they went hand in hand with the kind of critical writing she did. They were not separate entities.

AMY GOODMAN: So, as we deal with inflation, as we deal with more and more homelessness in this country, increased poverty, the ways that Barbara felt this had to be addressed? I mean, that classic quote, it’s not about — being poor is not about like a lack of morality, it’s about a lack of money — and humanizing the face of it and then challenging it.

ALISSA QUART: Right. So, she had another amazing quote, again, with such wit: “Money does not bring happiness — only the wherewithal, perhaps, to endure its absence.” She understood that, on a basic level, people just needed higher wages and more money, basically. And to make this into a moral or personal vendetta against the poor was an obscenity. And she dedicated much of her life to creating media around that and, in our work in the Economic Hardship Reporting Project, to bringing at this point probably thousands of people, including working poor people, back into the fold, teaching her methods.

JUAN GONZÁLEZ: Could you talk about some of the big stories that have come out of the project since Barbara founded it?

ALISSA QUART: Yeah. I mean, I can also talk about some of the ones she was most proud of, because they’re now at the front of my mind as I’m sort of mourning. One of them was a writer, Darryl Wellington, who sold his own plasma. And so he wrote about that experience of selling his own plasma and then widened it out to the plasma industry. There’s a writer who wrote — who herself is financially insecure, who wrote about taking in an unhoused couple as part of a social program, a kind of an NGO program, and what that meant and her own phobias and her own experience of that. So, I feel like these are some of the stories that I’m most proud of, because they have the ring of truth and the intensity of human experience, coupled with an understanding: Like, how do we destigmatize unhoused people? Oh, maybe we need to spend time with them. And also, both of those stories had a sort of dark humor that was her signature.

AMY GOODMAN: Her last book, in fact, was about dying, wasn’t it, Alissa? We have about 10 seconds.

ALISSA QUART: Yeah, it was about dying. And I think the profound takeaway for me from that was that each of our deaths is part of a broader social struggle, and the saga will continue after we go.

AMY GOODMAN: That book was called Natural Causes. And, of course, the one she was most famous for, Nickel and Dimed. Alissa Quart, friend and colleague of Barbara Ehrenreich, again, our condolences, and, as well, to Ben Ehrenreich, her son, and to Rosa Brooks, her daughter, and to so many others who cherished her, her whole family. Alissa Quart, executive director of Economic Hardship Reporting Project. I’m Amy Goodman, with Juan González. Stay safe. Be brave. 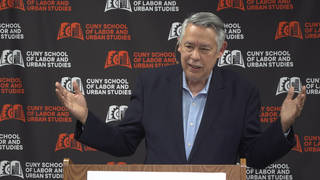