A San Francisco Bay Area community activist and entrepreneur who traveled to his family’s homeland in Yemen in December 2014 to work with coffee farmers. After Saudi Arabia began bombing Yemen in March, he was unable to leave and reportedly received no help from the U.S. State Department, which closed its embassy in Yemen in February. Alkhanshali eventually escaped Yemen by sea and finally returned to the United States this week. 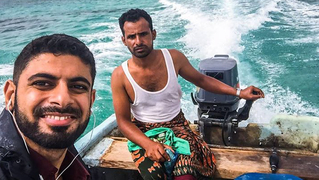