President Clinton nominated George Tenet for the post of CIA chief yesterday. Tenet, 44, is a career intelligence officer and is widely viewed as acceptable to both the CIA covert operations wing and conservative Republicans. He was formerly staff director of the Senate Intelligence Committee from 1989 to 1992, and he has served as the Deputy Director of Central Intelligence since July 1995 and the Acting Director since December.

Joining us to discuss the latest twist and turns at the CIA is Lou Wolf, the editor and co-founder of Covert Action Quarterly, a Washington DC-based magazine that focuses on intelligence issues. 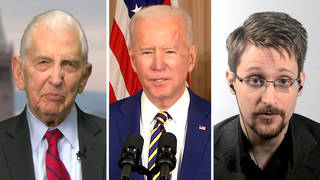 Jeremy Scahill on Biden’s “War Against Whistleblowers,” from Daniel Ellsberg to Edward Snowden