We’ve heard a lot over the past few weeks about the retraction, the reprimands, the firings and the resignation stemming from the CNN/Time Magazine piece charging the U.S. military used sarin gas on its own troops during the Vietnam War. But what about the substance of the piece? What about the serious charges that the military used sarin gas during its covert war in Laos and that it used the gas on its own troops? We are joined now by the two former CNN producers fired under pressure from the military after their piece — “Valley of Death” — aired on CNN.

StorySep 08, 2016“Millions of People in Laos Still Live in Fear” as Obama Pledges $90 Million to Clean Up U.S. Bombs 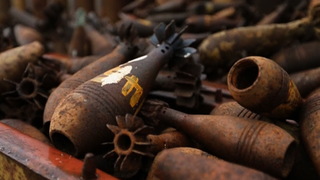 “Millions of People in Laos Still Live in Fear” as Obama Pledges $90 Million to Clean Up U.S. Bombs