As the World Discusses Power-Sharing Afghanistan’s Government Between Taliban and Northernalliance, Afghan Women Ask Who Is Going to Represent Their Concerns

With US warplanes directly supporting Afghanistan’s rebel Northern Alliance, many Afghans are pleading for a viableplan for the installation of a new government in Kabul. According to US officials, the current strikes againstAfghanistan are part of an effort not only to topple the Taliban, but to install a new government in Afghanistan.Last week’s capture and execution of veteran mujahedeen leader Abdul Haq, who many saw as a key figure to forge abroad alliance around the exiled King Zehir Shah if the Taliban is defeated, was widely seen as a major setback inthis effort.

The US-backed Northern Alliance leaders seem to be positioning themselves as the nation’s dominant political figures.But many of the Northern Alliance’s leaders are the same people whose feuding and misgovernment between 1992 and 1996helped open the way for the Taliban takeover. Some point out that the alliance’s ranking political leader,Burhanuddin Rabbani, served as Afghanistan’s president in the early 1990’s. He twice plunged the country into civilwar. And while it was the Taliban who institutionalized the total oppression of women after Kabul fell to them in1996, the Taliban certainly did not start the oppression of Afghan women. The alliance of mujahedeen groups that tookover Kabul in 1992 Forced women out of news broadcasting and government ministry jobs and required them to wearveils.

Most plans call for a broad based new government giving representation to all of Afghanistan’s ethnic groups andmajor political parties, including the Taliban. But no one has called for the participation of women, even thoughwomen almost certainly make up the majority of the adult Afghan population after many years of war. No one, that is,except for members of the Revolutionary Association of the Women of Afghanistan, who have been fighting for therights of women in Afghanistan since before the Soviet invasion in 1979. According to RAWA, the restriction of Afghanwomen is a terrorist act.

On Friday, Democracy Now in Exile spoke to Nasreen Gross, an Afghan human rights advocate who founded the group NIGARwho recently returned from a trip to Northern Afghanistan.

The original content of this program is licensed under a Creative Commons Attribution-Noncommercial-No Derivative Works 3.0 United States License. Please attribute legal copies of this work to democracynow.org. Some of the work(s) that this program incorporates, however, may be separately licensed. For further information or additional permissions, contact us.
NEXTBush Signs Legislation Vastly Expanding Federal Powers to Wiretap, Eavesdrop, Detain Anddeport 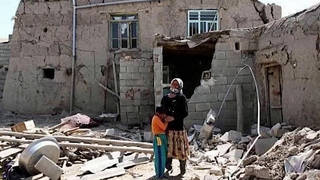