Last week, a wooden boat reportedly carrying illegal immigrants to Australia sank off Indonesia’s coast, killing morethan 350 people. The refugees were mostly Iraqis, but also Iranians, Afghans, Palestinians, and Algerians. Each hadpaid several thousand dollars for the journey from Indonesia’s Sumatra Island, along the smuggling route toAustralia. UN officials say only 45 survivors were pulled from the water, of over 400 on board. According tosurvivors, hundreds of mainly women and children were trapped in the vessel’s hull when it swiftly went down, whileothers drowned after floating for hours.

The deaths of the 374 passengers last week spotlights Indonesia’s role as a way station for desperate Middle Easternrefugees; on Indonesia as a geographically perfect staging point, and on Australia as a desirable destination forillegal migrants. The flow to Australia has grown considerably since 1999, mostly because of perceptions that asylumapplications are easier there than in Europe or the US. But the Australian government has recently cracked down onasylum seekers.

Has the conflict after the September 11 attacks increased mass migration? When the United States began its aircampaign in Afghanistan, aid workers predicted that as many as 1.5 million people would seek refuge in Pakistan. But25 days into the U.S.-led attacks, a total of about 80,000 Afghans have entered Pakistan, according to U.N. andPakistani officials, and numbers have been small in Iran and other bordering countries as well. Those who do want toleave must take a risky and costly journey past menacing Taliban fighters and guards at borders that remainofficially closed. Unknown numbers of refugees remain trapped just inside Afghanistan. Word of how hard it is toreach Pakistan has spread into the Afghan heartland by short wave radio and word of mouth. So when people do decidethey have to move, they often go somewhere else in Afghanistan. 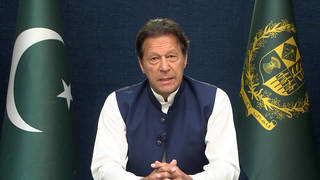