Should Henry Kissinger Be Tried As a War Criminal? A Debate Between Author Christopherhitchens and Former State Department Official Michael Scharf

“His own lonely impunity is rank; it smells to heaven. If it is allowed to persist then we shall shamefully vindicatethe ancient philosopher Anacharsis, who maintained that laws were like cobwebs; strong enough to detain only theweak, and too weak to hold the strong. In the name of innumerable victims known and unknown, it is time for justiceto take a hand.”

So writes Christopher Hitchens, in his new book ??The Trial of Henry Kissinger.

In the book, Hitchens surveys Kissinger’s involvement in the Vietnam War, planned assassinations in Chile, thebombing of Cambodia, genocide in East Timor, and other atrocities.

Today, we will debate the case against Henry Kissinger. 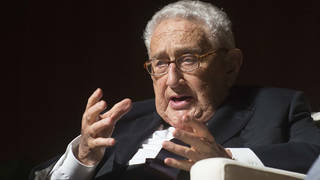