As many as 40 Afghan asylum seekers in Australia are on hunger strike in protest of the conditions at refugee camps.Some sewed their lips together last week to protest being held in the outback at one of Australia’s largest andharshest detention camps. The protesters say that 500 detainees, mostly Afghans, have refused water and food despitetemperatures of more than 105 degrees.

The remote Woomera Detention Centre in South Australia yesterday confirmed that 186 detainees–30 of them minors ­refusing to eat were under medical watch. Almost all are from Afghanistan. An unknown number of detainees have sewntheir lips, most with one stitch in the corner of their mouth. The Australian government threatened yesterday toremove the children of some asylum seekers after four boys were taken to hospital to have stitches removed from theirmouths.

Most of the unauthorized “boat people” traveled to Australia from the Middle East via Indonesia. But after theTaliban’s collapse last month, the Australian government abruptly stopped processing asylum applications fromAfghans, arguing that it needed to assess the new situation in Afghanistan. Amnesty International has condemned thefreeze, which has left hundreds of Afghans detained behind barbed wire in Australia’s six detention centers.

Democracy Now! correspondent Pratap Chatterjee is in Mazar-I-Sharif. Earlier today he visited the Shinbergan prison,about 70 miles from Afghanistan, where close to 3,500 Taliban prisoners are being held. It is one of the largestprisons in Afghanistan.

The original content of this program is licensed under a Creative Commons Attribution-Noncommercial-No Derivative Works 3.0 United States License. Please attribute legal copies of this work to democracynow.org. Some of the work(s) that this program incorporates, however, may be separately licensed. For further information or additional permissions, contact us.
NEXTVietnam Inc: A Photo-Journey Through the Villages, Fields, and Alleys of a Devastated Nation, Part I 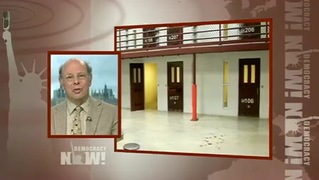