What Do the Washington-Area Sniper, the University Ofarizona Killer and Timothy Mcveigh Have in Common? They Were All Gulf War Vets. We Talk with Gulf Warveteran Charles Sheehan-Miles, Author of the A

On Friday, the Washington Post published the firstextended interview with Mildred Muhammad. MildredMuhammad is the former wife of suspected sniper JohnMuhammad. She talked about how John had come from theGulf War a changed man.

Mildred Muhammad told the Post. “When he got back, hewas a very angry man. I didn’t know this man. The oneI knew stayed in Saudi. He didn’t want anyone tobecome close to him. He became so quiet.”

Just days after Muhammad was caught, another Gulf Warveteran Robert Flores made headlines for killing threeprofessors in Arizona.

“My wife asked the question after we learned thatRobert Stewart Flores, who killed three professors atthe University of Arizona before shooting himself, wasa Gulf War veteran.

“She asked me the same thing last week, when welearned John Allen Muhammed, better known as theWashington D.C. sniper, is also a Gulf War veteran.Not to mention British Gulf War vet Paul Delaney, whostabbed his ex-girlfriend and mother of two, ColleenChudley, 30 or 40 times. Or Staff Sergeant FrankRonghi, a Gulf War vet who murdered and sodomized an11-year old girl in Kosovo. Or Jeffrey GlennHutchinson, also a Gulf vet, who murdered hisgirlfriend and her three children on Sept. 11, 1998.Or Joseph Ludlam, who murdered his former manager inNovember 2000. And then there’s the most famous GulfWar veteran of all, Timothy McVeigh, who killedhundreds of people in a homegrown terrorist attack inOklahoma City.”

Sheehan-Miles ended the article by writing:”Remember, when you go to the gas pump to buy yourMiddle Eastern oil, secured by the blood of Americansoldiers, this too is part of the price you pay. Notjust being party to killings halfway around the world,which our society seems to tolerate with a glib “Let’schange the channel” attitude, but also the lives tornapart back home.

“You may decide it’s okay — your chances of beingmurdered by a combat veteran are still less than therisk of being killed in a highway accident. But as wesend another few hundred thousand young men and womenoff to war, the odds are about to get worse.”

StoryJun 16, 2021Masha Gessen on the Biden-Putin Summit, Alexei Navalny & the Future of U.S.-Russia Relations
The original content of this program is licensed under a Creative Commons Attribution-Noncommercial-No Derivative Works 3.0 United States License. Please attribute legal copies of this work to democracynow.org. Some of the work(s) that this program incorporates, however, may be separately licensed. For further information or additional permissions, contact us.
NEXTDomestic Violence Advocates Criticize New Militarystudy Examining Why Four Fort Bragg Soldiers Killedtheir Wives: Army Blames Murders On Stress and Stigmaof Psychological Counseling 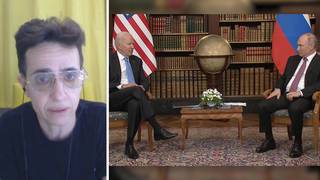 Masha Gessen on the Biden-Putin Summit, Alexei Navalny & the Future of U.S.-Russia Relations