Tonight in Salt Lake City, on the eve of the Olympic Winter Games, the Reebok Human Rights Award ceremony will alsotake place in Salt Lake City. Reebok annually recognizes four activists age 30 or under who they say have madesignificant contributions to the field of human rights. But this year one of the winners has refused to accept the$50,000 award from Reebok. She has done so in protest against the low salaries the company pays its workers in herhomeland. So she won’t attend the award ceremony tomorrow in Salt Lake City, which is scheduled to coincide with theopening celebrations of the Winter Olympics.

Indonesian contractors for the sporting goods giant Reebok and other U.S. shoe and apparel makers employ at least300,000 workers. There are five Reebok companies in Indonesia and 80% of the workers are women. Workers at factoriesaround Jakarta are paid a little over a dollar a day, the current minimum wage. Working conditions at overseasfactories have been a consistent public relations irritant for Reebok and other U.S. sneaker manufactures.

Dita Sari has been fighting for the rights of Indonesian workers for her entire life. At the age of 21, she defiedthe laws of then-dictator Suharto, and formed the first independent labor union in Indonesia.

The original content of this program is licensed under a Creative Commons Attribution-Noncommercial-No Derivative Works 3.0 United States License. Please attribute legal copies of this work to democracynow.org. Some of the work(s) that this program incorporates, however, may be separately licensed. For further information or additional permissions, contact us.
NEXTRedefining Globalization to Mean Global Justice for the Environment and the World 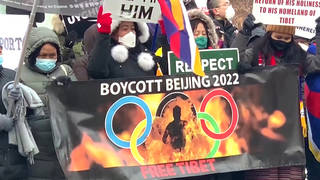