Up to 40,000 Die in Devastating Iranian Earthquake

We speak with a survivor who lived in Bam, we go to Tehran for a report from the Iranian capital and speak to two Iranian-Americans. [includes transcript]

In Iran, more than 20,000 have been killed in a devastating earthquake in the ancient city of Bam. Tens of thousands more were wounded or left homeless. The death toll may rise as high as 40,000. One Iranian official said, “There is not a standing building in the city. Bam has turned into a wasteland. Even if a few buildings are standing, you cannot trust to live in them.” Two hospitals collapsed in the earthquake. Injured survivors are being airlifted to hospitals hours away. In Kerman, one 600-bed hospital has 2,000 patients.

The government in Tehran is coming under criticism for being ill-prepared for a major earthquake or the recovery. One Iranian accountant told the Guardian of London “It’s just a disgrace that a rich country like ours with all the revenue from oil and other natural resources is not prepared to deal with an earthquake. I don’t know how many quakes we must have so the government make the buildings earthquake-proof in our country.”

In Tehran, one newspaper estimated over a million would die in the capital city if a similar earthquake hit there because so few buildings are earthquake-proof. An estimated 80 percent of the buildings in the capital are not earthquake proof. The US was among many 20 nations to contribute emergency aid. Agence France Press reported the delivery of U.S. aid marked the first time an American plane has landed in Iran since the Iranian hostage crisis ended in 1981.

AMY GOODMAN: In a moment, we’re going to speak with a woman who has just gotten out of Bam with her child and she will describe the scene there. But we first turn to Mahdis Keshavarz an Iranian American who is currently in Tehran where she was born. Welcome to Democracy Now!, Mahdis.

MAHDIS KESHAVARZ: Thank you Amy, for having me on.

AMY GOODMAN: Can you describe right now the reaction in Tehran and can you talk about those that are fleeing now from Bam?

MAHDIS KESHAVARZ: I think that since the earthquake hit Friday, there has been a real outpouring of grief on behalf of the Iranian people. You see on the streets, it’s a hot topic, for lack of a better term, the taxi drivers, you know, you encounter people, everyone and anyone is talking about this, and the primary concern is how to help the people of Bam, as most people realize that help in terms of–from the official corners of the government is not been quick in coming. People were quick to mobilize on their own in various neighborhoods from the mosques, from the hospitals and try to gather supplies and try to help the city itself offer whatever assistance they could. Since then, the Red Cross and other neighborhood efforts have been formed throughout town and the main squares, of which there are about 20 or 25, and are essentially drop-off points for donations, were they are asking for blankets, water, canned food, and medical supplies, especially for young children, and collecting efforts there and also monetary donations as well as various things and have boxes set up throughout the city for donations. There has been quite a few coming through by the looks of it.

AMY GOODMAN: Mahdis, we’re also joined by Moji Agha, who lives in Tucson, an Iranian American who has lost members of his own family. Welcome to Democracy Now!, Moji.

MOJI AGHA: Thank you. I actually want to make a correction. It’s not my family. There have been lots of losses and it’s a family from Bam. I ’m a friend of this family, and the family in Tucson, they are recent legal migrants to the United States, and the estimates of the number of people in the extended family and their relatives is anywhere between 50 and 100. And in the past weekend, I was just trying to deal with them, and trying to console them the best I could, and they are just — you know–they feel extremely helpless in the United States, those members here. And the chief — the main person is Mr. Khorasanibam, Mr. Jahangir Khorasanibam He is just obviously and very understandably in a total state of shock. He feels extremely helpless.

AMY GOODMAN: Right before the program, we were able to reach a woman who just came out of Bam, and you translated for her. We’re going to play a clip of that. Can you describe who she is?

MOJI AGHA: Sure. She is actually Jahangir’s sister; her name is Behjat. This is Behjat Khorasanibam. And she just told — she has had a deep wound in her head, and she was sitting right next to her daughter, 18-year-old daughter, whose leg — whose left leg was severely bruised in the earthquake — and they had just left Bam to come to the provincial capital of Kerman. And then she said a number of her relatives — the way she described it, she said, all of my relatives are dead. And she was just — she’d — what’s most chilling about when I talked with her earlier, during the weekend, when I was at the family’s house in Tucson, was how calm she is, and how she described like a reporter what has happened, and she has shown very clear signs of post traumatic stress disorder, shock, where she is she has to cut any emotion off in order to be able to cope psychologically with the tragedy.

AMY GOODMAN: Let’s turn now to the woman you have just described as she describes what has happened in Bam.

MOJI AGHA: [translating for Behjat Khorasani] I am in Kerman myself right now along with my daughter. my husband and couple of my other daughters are. We came from Bam to Kerman so that we would not suffer from aftershocks and other possible harms. So, we are refugees from the earthquake. [speaking Farsi]

MOJI AGHA: [translating for Behjat Khorasani] My relatives are all dead. A lot of my relatives are dead, my brother and two of her children are dead.

MOJI AGHA: [translating for Behjat Khorasani] And another brother of mine and his wife and his children are hospitalized in a Kerman hospital.

AMY GOODMAN: That is Behjat Khorasani, a 50-year-old woman, who lived in Bam speaking to us from Kerman where she has fled to with her daughter. You are listening to Democracy Now!. On the line with us, Moji Agha, who is an Iranian American in Tucson, also Mahdis Keshavarz speaking to us from Tehran and we will be joined by Omid Safi who is a professor of Islamic Studies and Comparative Religion at Colgate University as we talk about the disaster that has struck the ancient city of Bam in Iran. At least 20,000 people have died, many fear that the death toll will reach 40,000. Stay with us. 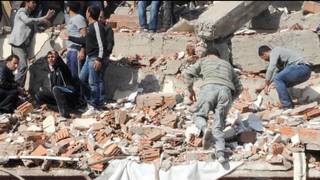