HARRY BELAFONTE: Today, is a historic and a proud day in the name of America. The world has sat by with tremendous anxiety and with a great fear that we did not exist. They had been told and they had felt that what our country, with its press and the leaders in the administration had said, we, today, invalidate all that. We stand for peace. We stand for the truth that what is at the heart of the American people. This is not the first time that we as people have been misled by the leadership. We were misled by those who created with falseness the Bay of Tonkin. Which falsely led us into a war with Vietnam, a war that we could not and did not win. We lied to the American people about Grenada and what was going on in that tiny island. We lied to the American people about Nicaragua, El Salvador, Cuba and many places in the world. And we stand here today to let those people and others know that America is a vast and diverse country and we are part of the greater truth of what makes our nation.

Dr. King once said that if there is — if man kind does not put an end to war, war will put an end to man kind. It was also said by a great president that when the state and the leaders of our government moves to a place of tyranny and becomes a society of secrecy, it is incumbent upon the citizens to not only raise their voices in criticism and protest, but they must understand that is the right thing to do, that they are doing the patriotic thing, and those who fail to raise their voices today are the traitors patriotism.

Were my friend, Dr. King, alive today he would smile, because we will make a difference and the message that we send to the world today is one of warmth and confidence and we stand in solidarity with all the people of the world who are marching at this very moment to join us in this end to war. Thank you and god bless you all.

AMY GOODMAN: Harry Belafonte addressing the anti-war protest in New York. Afterward, we managed to pull him aside for a quick interview.

HARRY BELAFONTE: My comments about General Colin Powell is really not a personal confrontation. Black Americans and many people of color have always taken great pride in what those of us, who’ve come from a history of oppression, have achieved. And when an individual breaks through and comes into the place where decisions are made that can make a difference, we then have high expectations. Once that is rejected by those who’ve acquired this position, we may sit in quiet disappointment. But, when the person who achieves that distinction then puts him or herself in the service of our oppression and those create new way in which to oppress us, that is morally unacceptable. And that is my argument with General Colin Powell and Condoleezza Rice. I expect, as do others, that their history should have prepared them for a much better articulation about how to treat people globally. Most of the people in the world who suffer tyranny, most of the people who suffer from the tyranny of oppression, the tyranny of hunger the tyranny of ignorance, the tyranny of HIV AIDS, there sits terror. And when you look very carefully at what it is that has caused this constant oppression, you will see that somewhere in there, America plays the game. And this gathering here today helps us understand that there is another America that is strong, that is resolute and is made of millions and millions of people. A matter of fact, we do make the majority voice in this nation, and that we have let the world know that we are in solidarity with those who seek to have other ways than war to settle our grievances.

VERNA AVERY-BROWN: Mr. Belafonte, you have been an outspoken of the government — the US government for decades, now, in your role as a part of the peace and justice community. If you had an opportunity to speak with President Bush, a man of your stature, what would your message be to him?

HARRY BELAFONTE: Dr. Kind once said, that to conquer your enemy is no victory. He’ll only rise again to confront you. What we’ve got to do is to look for the moral center that will help us prevail in convincing these men and some of the women who are involved with them that it is not politically expedient to do what they are doing. They are killing people all over the world and stimulating the possibility that that anger will continue, and that rage will continue to haunt the generations that come after us. What I’d try to convince the president on is that he can no longer play a morally bankrupt game. That he must understand that the people will not stand for it, and that we will, come the right time, which would be the next election — if is not stolen from us again — we will be able to emphatically show the world that America is not for war.

AMY GOODMAN: What about that issue of the election being stolen? The fact that the man who occupies the White House right now was not a democratically elected president?

HARRY BELAFONTE: I think that was the first sign for Americans that we are in great jeopardy. Most people say, not in America, you now, fascism and oppression cannot happen in this country. That is more a prayer than a possibility. And I think, that when we say the theft of our government, when we saw the suspension of civil liberties, when we saw the changing of the constitution, when we see that people can be arrested without charge and without council and without anybody communicating, all these are signals that we are in great danger of becoming oppressive and totalitarian.

It was exactly the same way things happened in Nazi Germany and people in the beginning remained silent and that silence began to erupt when it was a little too late. I think America has got to awaken to the truth of what is going on in our nation.

HARRY BELAFONTE: I think that the security that American people need is the security of truth. I think that they need the security of employment. I think that they need the security of social and physical development. I think that we need to have health care. I think that we need security in education. We sit with the largest population of prisoners in the world. Over two million men and women suffer in our prisons for reasons that they don’t deserve to be in prison for and I believe that when you look at that number, most of them are African Americans and Mexicans. We have more black people in the prisons of America that we have in the universities of America. And I think, therein sits the great insecurity of this country. Were we to change all that, America would be one of the most secure nations in the world. And what these men are doing, and what Ashcroft is doing with all of this hoopla is to distract the American people and they’re being misled. We must be very careful. There’s an old saying, that if you control the what people know then you control what people do. And we must get out the truth so people can begin to think differently.

AMY GOODMAN: Harry Belafonte. I spoke to him with Verna Avery-Brown of Pacifica Radio. As we turn now back to the stage with Angela Davis at the protest The World Says No to War.

ANGELA DAVIS: Good afternoon. It is a good afternoon to be in New York City. This vast community gathered here in fierce solidarity with people who are demonstrating all over the world, in Seattle and in Raleigh, and in Rome, London, Cape Town and Manilla. This community most perfectly represents the city of New York. Thank you.

Yesterday, Colin Powell boasted in the UN Security Council, that he represented the worlds oldest democracy. New York City’s refusal to grant a march permit for this demonstration is a travesty of democracy. And so we are here this afternoon to assert our democratic right to march. We are here to challenge the Bush administration’s strategy of pretending to defend democracy by trampling upon people’s democratic rights. We thus oppose the US Patriot Act and other legislations specifically targeting immigrant communities. This is a historic protest. And we link our protest against the war on Iraq to the historic 1982 march to the United Nations, a march of one million people demanding nuclear disarmament. Twenty-one years later, as we say, no war on Iraq, we are still calling for nuclear disarmament. It is Ironic how the term weapons of mass destruction has become inextricably linked to Iraq. Have we forgotten which country claims the largest nuclear arsenal in the world? And so, yes, we say no weapons of mass destruction should be in the hands of any government in the world.

The Bush administration tries to generate fear and hysteria. Tactics reminiscent of the McCarthy era. Tom Ridge hoped to set off a national march to hardware stores for plastic sheeting and duct tape. Some people may have joined that march of fear, but many more are participating in demonstrations of collective courage we are here today because we are concerned about the deterioration of political culture instigated by George W. Bush. He has lowered the level of political discourse to discussion about evil-doers and hunts for terrorist. This simplistic political discourse is fundamentalist in it’s impulse. It is designed to stop critical thinking. It is designed to prevent us from recognizing the US governments and corporate designs on Iraq’s oil.

Our responsibility to stop the war on Iraq is a responsibility to the future. We cannot allow the US government to establish a precedent that justifies future assaults, especially on peoples of the southern region of the world. We are here because we are concerned about rising poverty in our own country. We are concerned about attacks on single mothers, about structural racism, about homophobia, about the incarceration of what the government considers disposable populations. We are concerned about the continued repression of political prisoners including Mumia Abu-Jamal and the five Cubans in Florida. We are concerned about the symbiotic relationship between the prison-industrial complex and the military-industrial complex. We are concerned that we are on the brink of war. But, we feel heartened that key members of the UN Security Council are resisting the rhetorical tricks of Colin Powell. And the French Foreign Minister Dominique de Villepin evoked the rapidly developing global antiwar movement when he said, yesterday, give peace a chance. 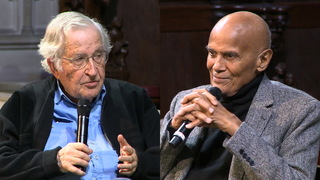