We speak with Kadiatou Diallo, mother of Amadou Diallo, a West African immigrant who was unarmed when four white police officers gunned him down in a hail of 41 bullets. The City of New York agreed to pay the Diallo family $3 million to settle a lawsuit stemming from the killing. [includes transcript]

The City of New York has agreed to pay the family of Amadou Diallo $3 million to settle a lawsuit stemming from his 1999 police killing.

Diallo, an immigrant from Guinea, died on Feb. 4, 1999 when four white New York police officers fired 41 shots at him. He was standing in the vestibule of his Bronx apartment unarmed. Police opened fire when he reached his wallet. They claimed they had mistaken the wallet to be a gun. He was 22 years old.

After a trial jury acquitted the officers, the family responded by filing a civil suit against the city for tens of millions of dollars. New York City Mayor Michael Bloomberg, who was elected after the shooting, said, “I’m just glad that we were able to come to a financial settlement with the family and let’s get on with it.’’

AMY GOODMAN: Today we’re joined by Kadiatou Diallo, mother of Amadou, who has spoken out about the police brutality and the killing of her son and has written a book with “The New York Times” reporter, Craig Wolfe, called, My Heart Will Cross This Ocean. My story, my Son. Amadou . Welcome to Democracy Now!. It’s good to have you back.

AMY GOODMAN: Can you talk about your reaction to the settlement?

KADIATOU DIALLO: Amy, as you know, it has been a roller coaster for the family. We have been going through all the avenues that was available to us, the criminal trial. First of all, the change of venue, the criminal trial of the four officers who killed Amadou . And then we went to the Justice Department for filing a federal — arguing that the officers will charged on a violation of Amadou ’s civil rights. It was denied. And the NYPD internal investigation also decided to exonerate the way the shooting occurred on February 4, 1999. This was another step that we were supposed to go as a family, and try to have a closure. The only way that I can say in my reaction is that the administration really by releasing the statement saying to the family that they apologize to the family for what happened to Amadou is the way for them to recognize that it was their responsibility, and also so many things had happened since then. I do not want to dwell so much in what is the amount, what is supposed to be done about the financial situation for my son, because nothing — nothing can replace him. It was important to have closure. And to go one step further in working in Amadou ’s legacy to have a living memory for him so that he will not be forgotten.

KADIATOU DIALLO: The foundation will be working in bringing the Amadou Diallo scholarship has been proposed to help immigrant students, because, you know, my son came to America for a reason. He wanted to gain higher education in American college. He was selling on the street, as I said in my book, to gain — to save money to pay his way for college. And I can see him through the eyes of so many students who came from Africa for the same reason, and are struggling still so I would love to see him be remembered by helping those who are in need to gain an education in America. And to help his siblings, because he wanted to help them as well, and he wanted for them to get an education. So, this is my purpose. The foundation will work in furthering that goal, at Amadou Diallo scholarship fund and the Amadou Diallo memory fund will help working in an exchange program from America to Africa. We want to work for police and community relations. That’s the purpose of creating the foundation. We have a website. It’s www.AmadouDiallo.com.

JUAN GONZALEZ: Clearly, the police department disbanded the street crimes unit that was responsible with the four officers that were members of the unit. There was much national attention to the issue of racial profiling. But do you think anything has changed in the New York city police department. Do you think they have learned any lessons from the tragic death of your son?

KADIATOU DIALLO: I do. I can tell you the way this street crimes unit was conducting the hostility in the minority neighborhoods was really the — the incident that led to the death of my son. When we came to this country, our main goal was to ask for positive changes. That street crime unit, as you said, has been dismantled, and the — they tried to also hire more minority police — to put in the police force because, you know, those four officers who killed Amadou lived in long island and they never lived in the Bronx. They don’t know that Amadou lived in that house. It was completely — very, very wrong scenario. So, I do think that happened because of our call and because of the death of my son. Is it enough changes? No. Because we are still having incidents happening. This is why I’m working to continue my journey in talking, and I think so many people are trying to do things to make more changes, and the NYPD prior to this administration was really different, and I can say this new administration, I feel, are really more to working in furthering that goal. The death of my son has really helped to crystallize the issue of racial profiling, and police brutality. I think that we have to — we don’t have to let that die. We have to continue to work on that goal.

AMY GOODMAN: Kenneth Boss is suing the police department for full reinstatement to the department, one of the men involved with the killing of your son. Edward McMillan is in the Staten island fire department. In fact, his name cropped up in the last week when one of the firefighters on new year’s eve attacked another firefighter. Crashing a chair over his head and they mentioned that McMillan was then on duty at the time. Your thoughts about these four men?

KADIATOU DIALLO: You know, Amy, I think that when I heard Kenneth boss was suing to get his gun back from the NYPD I reacted strongly against that. I was aware that they were put in desk duty, and I do not want it for them to have their guns back and to be pretending that they were capable of conducting the same work that they were doing. Because everybody knows that what they did on February 4, 1999, they ought to have the courage to recognize was wrong, and by giving them back the guns and letting them go back to the street again, will cause more incidents, and I don’t want to see that happening. For the other officers, the two officers who joined the fire department, I have no comment on that. I do not want them to give them back their guns to go back and do the same work. And I will join the community because at the end of the road, I think — I — my own decision is to continue to work with the community, and see what else can we do to prevent what happened to my son. That’s my real goal. And I will continue to do so. I hope that the NYPD would not give them back their guns to tell them to go back to the streets of the neighborhood. To tell them to go out and do some — some work that they have done, which was really wrong. I think if they want to do positive changes, they have to make them realize that they were not fit to carry the same work.

AMY GOODMAN: I think some people were surprised when they heard the settlement, $3 million, that it was less than in cases, for example, like be Abner Louima, the Haitian American man who was brutalized by police and got more than $8 million. Your son was killed. Your response to that?

KADIATOU DIALLO: Amy, what I can say about that is be Abner Louima will live with the trauma of what he endured for the rest of his life. But he was fortunate to survive and to testify, and that, I think, helped to get convictions for the officers who brutalized him, and I know that he went through a lot, too. We are going through more than that because we are grieving family. Amadou was the victim. He will never come back. I don’t want him to be drugged in a way, and to put me through, if I can, to put me through more pain that was caused at the criminal trial in Albany. I am there so much for those who feel that what the NYPD gave was less, I understand them. For those would who feel the NYPD have given more — I mean the city has given too much, I understand them, too. Amadou’s death has impacted and reached, touched so many people in America, and around the world. It will continue to do so. People will have their own opinions. But they have to remember, we will live with this for the rest of our lives. There is no way to value a human life. We cannot have something to compensate what we lost here. For me — for me, the closure will be for those who feel that they need it for Amadou to have more, to help me to the goals that I set up for him. The foundation has been created. I have a book about his life and my life, and I’m going to work on those goals. I call them to come and join us to do this, and I call other people to feel they want to do something in Amadou 's name in a positive way. Give a slip in his name. Write a poem in his name. And let's try to make his memory in a positive way. That’s my goal. For other things, I — I cannot comment more about it, because as I said, yesterday to the press conference, there is nothing to be — to be won. I did not win anything. My loss continues to be the same. There is a hole in my heart that will be filled only by what I can do for Amadou ’s memory.

AMY GOODMAN: We want to thank you very much for joining us today, Kadiatou Diallo, mother of Amadou Diallo, killed in 1999 by four white police officers, also wrote the book about my son, my heart will cross this ocean, my sorry, my son, Amadou. You are listening to Democracy Now!. 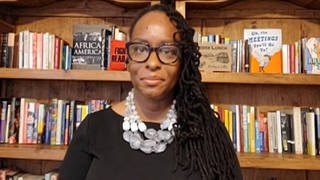