John Kerry received an endorsement from what many thought was an unlikely source: The American Conservative magazine. We speak with the author of the magazine’s editorial, Scott McConnell. [includes rush transcript]

More than 220 newspapers across the country are endorsing John Kerry for president, far more than President Bush. But last week, Kerry received an endorsement from what many would call the most unlikely of sources: “The American Conservative.” The magazine is edited by three-time presidential candidate and conservative pundit Pat Buchanan.

In the article endorsing Kerry, the American Conservative writes: “The only way Americans will have a presidency in which neoconservatives and the Christian Armageddon set are not holding the reins of power is if Kerry is elected. If Kerry wins, this magazine will be in opposition from Inauguration Day forward.”

StoryFeb 12, 2020South Bend Politician: I Worked with Pete Buttigieg. He Did Not Respect Black Residents’ Struggles

AMY GOODMAN: We’re joined right now by Scott McConnell, who is executive editor of The American Conservative, author of the article on the November 8 issue, endorsing Kerry. The headline: “Kerry is the One.” Why are you so critical of George Bush?

SCOTT McCONNELL: Well, he has made very, very bad decisions as president, and the invasion of Iraq is, I think, the worst decision any American president has made, certainly since World War II, and perhaps longer. And it’s made — if democracy means anything, somebody who makes a decision like that has to be thrown out of office.

AMY GOODMAN: Go through the key issues that you feel that President Bush has betrayed you on.

SCOTT McCONNELL: Well, first, adopting a kind of wildly ambitious, reckless neoconservative foreign policy, which is quite the antithesis of his father’s foreign policy, which was always prudent and sensible, and multilateral. And that led to the Iraq invasion, which is, I think, made the whole problem dealing with Islamic terrorism much, much more difficult. But secondly, he has very un-conservative ideas about immigration. He floated earlier this year an idea of giving work visas to anybody in the world who was offered a job in which there wasn’t an American taker, which is essentially an invitation for all American employees who want to pay people $5 an hour to say, you know —- to Bangladesh or wherever, to try to essentially really change the whole labor market in America to the detriment of the American workers. And the tax cuts without any spending cut has led to a really bad deficit problem. But I have to say -—

AMY GOODMAN: I’m just going to interrupt for a second. Are you listening on your radio as well?

SCOTT McCONNELL: I’m not, but I’m getting a very fuzzy connection here.

AMY GOODMAN: We’re speaking to Scott McConnell. We’re just going to switch lines on you for one moment. As we do that, Scott McConnell is the executive editor of The American Conservative magazine. And the magazine came out supporting John Kerry, not George Bush, although Patrick Buchanan, whose birthday it is today, one of the founders of this magazine, has endorsed George Bush. If you could continue with your rationale for why you are not supporting the republican president?

SCOTT McCONNELL: Well, a third reason is I think a Bush second term would be as bad as the first, and it would be — it has a way of — I mean, I think of conservatism as kind of an ideology of prudence in government and, you know, lack — sort of respect for — in the human nature and like — and if Bush, a second Bush term, I think, is likely to discredit conservatism for a long, long time to come. But I have to say that for all of us, and there’s a number of anti-war conservatives, the Iraq war is pretty much the defining issue. I mean, if Bush is — you know, you want more ability to overlook his, you know, type of deficits, I don’t think many conservatives would want to put in a democrat just because they disapproved of Bush’s fiscal policy or a skepticism about, you know, No Child Left Behind or something like that.

AMY GOODMAN: So what about the Iraq war? From the beginning, have you opposed it, and when you talk about anti-war conservatives, how large a bloc are you?

SCOTT McCONNELL: I don’t think it’s a really large electoral bloc, but think it’s a fairly large number of academics and people who write articles and people who pay a lot of attention to foreign policy. That is to say, maybe 10% or 15% or 20% of — I mean, if you look, like The New York Times a couple of days ago ran an ad calling for withdrawal from Iraq and was signed mostly by academics. Almost all of them had supported President Bush, his election and all of — and who had supported, you know, Ronald Reagan’s election. And so, you know, this is like enough to make a big ad in The New York Times. That’s, you know, it’s not a huge number of voters. I mean, I have to say that President Bush has a lock on the Republican Party right now in voting sense. But we started this magazine in September of 2002, and it was clear then that the neoconservatives wanted to take the — you know, they had a plan for American military domination of the Middle East. They were thinking, you know, Iraq, perhaps Syria, Iran. There’s like a large list of governments that they — these regimes they wanted to change. Regime change is a nice soft sounding word for it. And we were skeptical from the beginning, that we knew that this wasn’t going to work out, and that they were — we were very sure they were wildly optimistic about Americans being welcomed by open arms in Iraq, and you know, there was a fair number of reporting in our magazine and others about how the intelligence claiming that Saddam had these stockpiles, was close to a nuclear weapon and stuff, was kind of being distorted by the civilian officials in the Pentagon, and it was not what mainstream intelligence officials in the State Department and the C.I.A. thought.

AMY GOODMAN: You write, “If Kerry wins, this magazine will be in opposition from inauguration day forward.”

SCOTT McCONNELL: Yes. Well, we’re not liberals, and John Kerry is. I mean, I wish John Kerry well, if he’s elected, in extricating the United States from Iraq. That would probably involve getting some help from Europeans and other allies. I’m not sure if it’s too late for that or not, but we’re not going to be wildly enthusiastic. On immigration, Kerry is just as bad as Bush. On — I mean, we’re not — we’re not — probably some of us may go on to become democrats, but we’re not there yet. 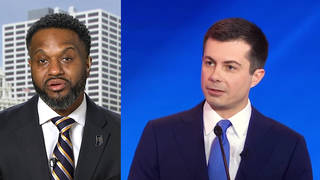 South Bend Politician: I Worked with Pete Buttigieg. He Did Not Respect Black Residents’ Struggles