Reports of voter suppression, intimidation and confusion are pouring in from battleground states around the country. We go to Florida to speak with State Senator Tony Hill in Jacksonville and we go to Philadelphia to speak with Janet Ryder, a Voter Protection Coordinator in Philadelphia. [includes rush transcript]

AMY GOODMAN: Senator Tony Hill has joined us from Florida, state senator from Jacksonville, where 27,000 votes were thrown out in the 2000 election. Already today, complaints are pouring to his office from constituents who are saying they’re having problems voting. State Senator Tony Hill, welcome.

AMY GOODMAN: What’s the issue? What are the problems?

TONY HILL: Well, we have the situation with provisional ballots. Of course, in other states, provisional ballots means that you can vote wherever. If you come to a polling place that’s not your polling place, you can still use a provisional ballot. Well, in Florida, we decided that the provisional ballot that you use, you have to use it in that precinct, and it will only be counted if you are in the right precinct. And I have been getting people who have called this morning saying “I voted a provisional ballot, even though they’re saying that was not my precinct.” We might have some problems in that area. What we’re trying to do is to tell people before, if they’re confronted, we are going to have what we call challengers in our precincts, and we’re saying before you make a decision, come outside and talk to a legal person, or just take a few minutes to digest what they’re saying before you take any options that they have. Just in this gentleman’s case, of course, it might have been too late. I’m hoping that he told me that’s where he has been voting for the last four or five years. He didn’t vote in the primary, and that’s going to be a problem too, because a lot of people, we could have caught this glitch. That’s the other reason we were trying to get people to vote early.

AMY GOODMAN: We’re joined in the studio by Miles Rapoport, president of Demos, who is the former Secretary of State of Connecticut. Your response as you hear this problem.

TONY HILL: Hello, Miles. Good to hear from you, Miles.

MILES RAPOPORT: Good to hear from you, Tony. What Senator Hill has said is a problem everywhere around the country. Provisional ballots were enacted by Congress to try to help people to vote if they were not on the rolls for whatever reason. But each state is counting them differently, whether you are in the same county or the same precinct. So, I think what Senator Hill is saying is very important, not just in Florida but all around the country, which is before you go to vote today, try to make sure that you can find your polling place. There is a website that will tell you your polling place, which is mypollingplace.com. If you enter your name and address in, that will tell you where you are supposed to go. If not, then check in with the local Registrar of Voters. But it’s very important to go to the right precinct to make sure that your provisional ballot is counted properly.

AMY GOODMAN: What do you do if you have to work, and you race out to the polls, and there’s just an incredibly long line?

MILES RAPOPORT: Well, that’s going to be a problem. It’s, you know, I think, one of the reasons why early voting is a good idea is it allows people over the course of the two-week period, and I hope come after this election, that’s one of the reforms that will be enacted. But for today, you going to have to just try to take as much time as you can, get as much time off from work as you can, and take a book with you and take your I.D. with you, and make sure you are going to the right place.

AMY GOODMAN: Any suggestion to the bosses of the country right now, in terms of letting their workers go?

TONY HILL: A lot of employees are allowing their folks to get off to vote. Of course, you have got some who don’t, but I would say the majority of the folks are allowing people either an hour or two hours to get off, either leave work early that day to go and vote.

MILES RAPOPORT: I think it’s a fundamental act of patriotism. I can’t imagine — I think just every employer recognizing the solemnity and the importance of the day would let their employees take as much time as they need to vote on this particular day.

AMY GOODMAN: Wasn’t this a day off at some point?

MILES RAPOPORT: Well, in the past historically and in most other countries, election day is a holiday. That obviously makes a lot of sense. We don’t do it. We do it on a workday. We do it only for one day in most states. I think we have got to make the leap that when we have so many people interested in voting, which is a fabulous thing, that we ought to make sure that the system is as accessible and as easy for people to navigate as possible from here on in.

AMY GOODMAN: Would it be too cynical to say that in some cases in this country, the employers would be voting in one direction, the workers in another, and there might be a vested interest to not giving them time off?

MILES RAPOPORT: Well, I would hate to think that, and I would hope that the employer and employee would go together to the polls and talk to each other online.

AMY GOODMAN: Well, we have to break. When we come back, we’ll be joined by Ralph Neas as well, People for the American Way Foundation, also Barbara Arnwine, executive director of the Lawyers’ Committee For Civil Rights Under Law. Senator Tony Hill, on the line with us from Florida, state senator from Jacksonville. 27,000 votes were thrown out there in the 2000 election. This is Democracy Now!

AMY GOODMAN: As we turn now to Pennsylvania. Reports are Republicans have also announced plans to challenge as many as 10,000 voters from west Philadelphia, an area populated by many African Americans. We’re joined now by Janet Ryder. She is with the Philadelphia voter protection. She’s coordinator of the AFL-CIO there. Welcome to Democracy Now!

AMY GOODMAN: What are you finding, and what about this information, the plans to challenge as many as 10,000 voters in West Philadelphia?

JANET RYDER: Well, I believe we’re prepared for that today. We have attorneys assigned at polling sites that are ready to offer any assistance if needs to be; and we’ve done an excellent job on getting the word out on how new voters do need identification at their polling sites. We’re hopeful that the training that was done for the judge of elections is adequate and everybody is ready and prepared. I’ve never seen a city as hyped-up for the election — all ages, young and old, are aware of how important this vote is. Every polling site I’ve ridden by has long lines, and people are standing there patiently. It’s a wonderful day. Beautiful sunshine, and I think people are very upbeat about this.

AMY GOODMAN: You’ve had an issue in the past, for example, in the mayoral race, of people driving around with dark-tinted windows, in suits, threat — Well, people found them rather threatening when going to vote, afraid they’re being monitored by law enforcement. Is this an issue? How are you dealing with this now?

JANET RYDER: Well, early indications, we haven’t gotten any reports yet from out in the field. We should be getting them in very soon. So, I have not heard of that yet. So, I can’t — to my knowledge, that is not going on. We haven’t heard anything yet.

Fighting for the Right to Vote

NEXTFighting for the Right to Vote 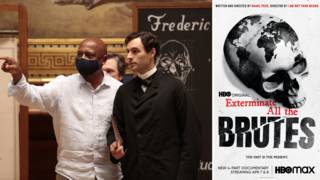