The political crisis in Ukraine deepened last night after the opposition leader, Viktor Yushchenko, declared himself winner in Sunday’s presidential run-off against Viktor Yanukovich. We go to Kiev for a report from Independent reporter Askold Krushelnycky. [includes rush transcript]

Just before the program, we spoke with London Independent reporter Askold Krushelnycky. He filed this report from the streets of Kiev.

AMY GOODMAN: Just before the program, we spoke with London Independent reporter, Askold Krushelnycky. He filed this report from the streets of Kiev.

ASKOLD KRUSHELNYCKY: For the third day running in a snow-filled Kiev, the capital of Ukraine, hundreds of thousands of demonstrators have come out on the streets, many of them have been camped out all night on the main street and the main square of the capital, which has been brought to a standstill now since Sunday evening, in fact. The demonstrators are protesting because they feel that their candidates in last Sunday’s presidential election, Viktor Yushchenko, was cheated a victory in the election where his rival was the government candidate, the present prime minister, a person called Viktor Yanukovich. Now, the United States government made a very strident comment condemning the conduct of the elections, which were monitored extensively by western organizations and monitors from the U.S., from the European Union, from the Organization of Security and Cooperation in Europe, and a variety of other monitors who all agreed that the government was responsible for massive and egregious infringements of electoral law in the run-up to the election, using intimidation, bribery, other underhand methods to try to coerce people not it vote for the opposition candidate, and then massive stuffing of the ballot boxes, or just stating the tallies at the various local polling stations and then at administration levels where local polling stations were supposed to send the results of their counts to. So the feeling of being cheated of victory is prevalent here amongst the protesters, who seem to — sometimes you get the feeling that it’s almost everyone in the capital. The contest, the electoral contest was between Mr. Viktor Yushchenko, who is a pro-western candidate. He is actually married to an American woman of Ukrainian origin. He is an advocate of membership of NATO, of the World Trade Organization, of the European Union and definitely has a westward tilt and a westward attitude and a concept of — or grasps of the concept of democracy, which seems to be absent in the present prime minister, who was nominated by the incumbent president, Leonid Kuchma, himself shunned by most western governments because of his record of abusing human rights and dealing with Saddam Hussein’s government before the American-led invasion, in fact, selling weapons to Saddam Hussein. The prime minister, Yanukovich, who is claiming victory, is a twice imprisoned person. He served two sentences for assault and robbery, and he came to the political stage on the coattails of his links with one of Ukraine’s biggest organized crime outfits. So, it’s — Yanukovich is just completely pro-Russian and wants to help the Russian President Putin, form a new powerful Moscow-led economic bloc, which would encompass Russia, Ukraine, Belarus and Kazakhstan. So, for many, the election has been seen as a choice that will determine whether Ukraine tilts to the West, embraces and deepens its very fragile democracy, or whether it gets sucked back into Moscow’s orbit and goes down the increasingly authoritarian and autocratic route of President Putin’s Russia, and the neighboring states of Belarus, which is considered the last Stalinist dictatorship in Europe.

AMY GOODMAN: Askold Krushelnycky is a reporter with the London Independent. He is reporting to us from Kiev in the Ukraine. This is Democracy Now! 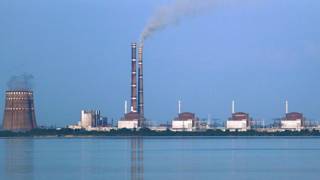