Monica Gabrielle, who lost her husband Richard in the Sept. 11 attacks on the World Trade Center, criticizes the Bush administration for mishandling intelligence prior to 9/11 and hampering the 9/11 investigation. [includes rush transcript]

She says: “Let’s remember that the intelligence works not as an invitation to come to a party. You don’t get time, date and place. What you get is bits of pieces of information that analysts then have it to put together. There were many warnings. There were many dots. There was a failure to connect the dos.”

JUAN GONZALEZ: I’d like to get back to Monica Gabrielle right here in the studio with us. Your reaction — I see you nodding your head several times, especially when Mel Goodman and Coleen Rowley were speaking. Your assessment from the perspective of some of the families of how this investigation is unfolding, and whether the Commission is doing the job it should be doing, and in terms of getting to the bottom of these matters?

MONICA GABRIELLE: First of all, I think that the Commission is — it’s been stonewalled and footdragging for most of the time. We are now coming into, you know the final stretch, so it speak, and with all of the information that’s suddenly been brought forth, the whistleblowers that are coming forth, I fear that there is not going to be enough time to follow the investigation of — you know, the information they’re getting now.

AMY GOODMAN: This is a report that’s called an Independent Commission.

AMY GOODMAN: What’s your reaction to the news that the White House plans to vet the 9-11 Commission Report, possibly delaying the release until maybe even after the election?

MONICA GABRIELLE: Yeah. We have heard of that, and we figured that it would probably have to go through a vetting process because of the sensitive material. If you recall, the Family Steering Committee wanted to take this Commission and its work out of the election cycle. We proposed a January final date. I think that would have — you know, eliminated this problem. What we want is a transparent, full report of the failures, and because of the limitations set by the White House, because of their refusal to cooperate and stonewall, what we have now is a Commission that’s under crunch time. And I fear that perhaps we won’t get all of the answers through this Commission, and quite honestly, the fact that Condi Rice as National Security Advisor continues maintain they didn’t know or couldn’t have known is unconscionable. There were warnings out there, outside of a specific date, time and place, there was plenty of material out there that if they had just paid attention, or if she had done her job, and put people on alert in August, the FAA would have been notified. The Port Authority would have been notified. The city of New York would have been notified. New York City was a clear target after '93. The people in Tower Two — my husband, should have had the opportunity to decide whether it was time to run or whether there was not a reason to get out of those buildings. And instead, they heard — you know, claims that everything was fine. Everything was safe and they took their time getting out. I think it's unconscionable. I think we need to revisit probably the job description of the National Security Advisor and take a look at what she did or didn’t do in those months prior to September 11th, in filtering information that was critical. When you have a P.D.B. that is titled, “bin Laden determined to strike inside the U.S.”, and you have chatter that says the big thing is coming, you are going to get hit — you know there are sleeper cells, that you don’t take that very seriously and protect the cities — the big cities like New York and Washington and L.A., I just find it just unconscionable.

AMY GOODMAN: August 6, 2001, when Bush received that report, once again on that month-long vacation at Crawford, Texas. Do you think this could have been averted?

MONICA GABRIELLE: I — from everything that’s coming out, I feel that we can never be 100% sure, but I firmly believe that the destruction and death could have been minimized.

AMY GOODMAN: I want to thank you all very much for being with us. 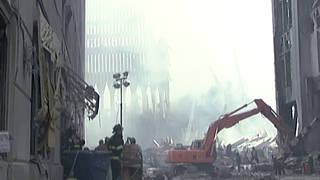