Kweisi Mfume on President Bush’s Refusal to Address the NAACP

President Bush recently became the first president since Herbert Hoover to not address the NAACP during his first term in office. We asked the NAACP’s president for a response. [includes rush transcript]

StoryOct 03, 2022Noam Chomsky & Vijay Prashad on Ukraine, Why U.S. Must Negotiate with Russia & What Media Gets Wrong

AMY GOODMAN: I’m Amy Goodman as we broadcast from the end of the democratic national convention here in Boston as people were filling their seats just before the main address of John Kerry last night, we caught up with the president of the NAACP earlier this month president bush declined an invitation to speak at the NAACP’s annual convention for the fourth year in a row. I asked him about President Bush.

KWEISI MFUME: Well, you know, the President made a tactical error, it’s regrettable. He’s the first President sense Herbert Hoover to do something like that. By his refusal to in any way, not just last year, but over the last four years, wanting interact with the nation’s largest civil rights organization, the animosity on both sides has only grown. It didn’t get to this feverish pitch all of a sudden because he decided not to come this year. He’s made a conscious decision that he never wanted to meet even though we write him twice a year asking for 20 minutes of his time it talk about issues. He’s never been to any of the conventions. And the question is whether or not he lied four years ago when, as a candidate he came to our convention and talked about all the republican party had not done, but all that it would do if he were elected. And then he just got lost, at least in terms of us and in terms of a lot of members of the black community. I don’t have anything against George Bush on a personal level. I think he’s getting bad advice and he’s done more in this decision to energize the larger base of a person who probably would not have voted than anything I or anybody else could have done to turn our voters. It’s something that I think has added to this anti-Bush fever that’s running around the country and I am not saying everybody’s infected with it, but I can tell you that there are a lot of people who just don’t see him as a unifier. They see him as one who’s quick to divide. And if his litmus test to only talk to and meet with those who agree with you, then God help our country.

AMY GOODMAN: What about his going to the Urban League?

KWEISI MFUME: I think most people know that that was the sort of cover himself because he had told the Urban League two weeks prior that he didn’t have time, that he had schedule conflicts, when he really didn’t. Then after what happened at the NAACP conference, I think it was a face-saving attempt at the last minute to say by the way we did find time, I would like to come by. You know a lot of voters watch this and some of them were born at night, they just weren’t born last night. I think they can tell the difference between sincerity and finding a way to conveniently reach out in the 11th hour of one’s presidency.

AMY GOODMAN: And so how is the NAACP mobilizing now for the election?

KWEISI MFUME: Well, we have been mobilizing all year. We have been concentrating about 27 states, making sure that we register unlikely voters and turn out unlikely voters which are never counted by the pollsters, and to make sure that there is a process of political registration, political education, and in November, political turnout. We had great success four years ago and increasing significantly the turnout of black voters nationwide. We hope to do that, if not to eclipse it this year.

AMY GOODMAN: How do you stop Florida 2000 from happening again?

KWEISI MFUME: One of the things that you have to do is you have to start early. Waiting for Election Day is not going to get it. We already have attorneys on the ground throughout the states. It was the NAACP that filed suit against seven counties and the state of Florida within a month or so of the last election and we held public hearings there. We are starting now to document—

AMY GOODMAN: What came of that lawsuit?

KWEISI MFUME: Well, there was a huge legal ruling. It was a great deal of judicial relief that was set forth by the courts. A process which has already been violated because a month or so ago, I had to write the attorney general urging him to have the state cease and desist from purging voters. They had purged, up to that point, 2,100 legally constitutionally approved voters, whose rights had been restored by the state. Then somehow or another purged them again. In this instance, it was a matter of having your hand caught in the cookie jar and they said oh, we are sorry, we apologize, you are absolutely right, these people are legal. So, the best thing is on the front end of this process, to document problems, to certainly bring about legal challenges, and to make sure that everybody is aware going into the election that there are more eyes than just a few watching.

KWEISI MFUME: Well there’s a lot that hasn’t been talk about with Florida. It’s a peculiar case. It would have been refreshing if Jeb bush had just stood up and said emphatically we are never going to have this again in our state. We are going to do everything we can to comply and we are going to meet every litmus test out there to assure that the right to cast a vote and is counted and it’s an American right that will be protected by the governor of Florida.

AMY GOODMAN: Do you see a conflict of interest between having the governor of Florida being the president— the brother of the president?

KWEISI MFUME: Well, I don’t see a conflict of interest. He was duly elected and then reelected. So somebody there wanted him in office. I think it put as greater burden on him to say to people that we are free of any political foolishness and a greater burden on Jeb Bush to lay out a process that he put his word to that will ensure people’s right to be counted.

AMY GOODMAN: Very last question, much the overwhelming number of delegates here, the overwhelming majority are opposed to war and opposed to the USA PATRIOT Act. That’s not what we are hearing from the vetted speeches on the platform for the most part and certainly not in prime time. What is your response?

KWEISI MFUME: Well that’s why I went out on the floor and talked about it’s none sense number one of attempting to fill a democratic government in Baghdad without protecting democracy and democratic voters here at home. This nonsense about trying to find a way to not deal with the issue of choice. Not one of those personal decisions that a woman has to make. I think it was a decision made between her and her God and not for her by her government. The issue was a minimum wage but more importantly a living wage for working men and women. Those are very dear issues to me. The right to have the process protected in terms of voting and the need to try it find a way to build a coalition of black people and white people and Latinos and Asians and Native Americans and forget the hype but to put together a coalition of real people who every day look at this country and all they want for it to be is better than the way they found it.

AMY GOODMAN: The president of the NAACP speaking from the FleetCenter as he was taking his seat to watch John Kerry accept his party’s nomination for President of the United States. 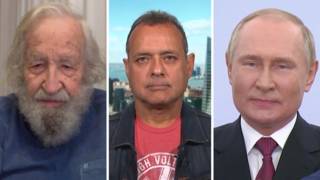