Today is known as Columbus Day–we take a look at why some people are not commemorating the arrival of Christopher Columbus to the so-called “new world.” [includes rush transcript]

Today is known as Columbus Day which is supposed to commemorate the arrival of Christopher Columbus to the so-called “new world” in 1492. But the holiday has long caused anger amongst people of color, especially Native Americans, who object to honoring a man who opened the door to European colonization, the exploitation of native peoples and the slave trade.

AMY GOODMAN: We are joined now by Roberto Mucaro-Borrero, who is President of the United Confederation of Taino People. Also on the line with us is Brenda Dardar-Robichaux, Principal Chief of the United Houma Nation, and Charles Verdin, Chair of the Pointe-au-Chien Indian Tribe, both from the Louisiana area. Welcome to Democracy Now!, Roberto.

AMY GOODMAN: It is good to have you with us. What about this day, Columbus Day?

ROBERTO MUCARO-BORRERO: Well, I think today is just a blatant example of the continuation of the campaign of genocide against indigenous peoples throughout this hemisphere and the propping up of racist propaganda, which, I think, is very significant in a country like the United States that is supposed to be championing human rights throughout the globe, but yet here we are celebrating a man who, as you stated, began the genocide of indigenous peoples, exploitation of resources in this hemisphere and also was the first person to initiate the transatlantic slave trade in this hemisphere.

ROBERTO MUCARO-BORRERO: Well, he was the first one, Christopher Columbus, because of the outcry of some of the people in Spain against enslaving native peoples, indigenous peoples, particularly Tainos, and other indigenous peoples around the Caribbean and South American area, that they substituted the bringing in of peoples from the African continent to take over the places of people — indigenous peoples working in mines and these areas or to provide labor for sugar cane plantations, etc., etc. And it was Columbus that initiated this, because this was already going on from the Portuguese people who were already going to the coast of Africa to enslave, capture and enslave people for those kind of purposes.

AMY GOODMAN: Can you talk about the origins of Indigenous Peoples Day?

ROBERTO MUCARO-BORRERO: Sure. Indigenous Peoples Day came as a result — it’s not a federal holiday, recognized holiday, unlike Columbus Day is, but Indigenous Peoples Day came as a result of advocacy of indigenous peoples on the international front. As you know, from 1992 there was a large outcry of indigenous peoples protesting the planned quincentennial celebrations that they wanted to institute in the United Nations system. Spain had championed this, that the discovery of America should be something that the whole world should be thankful for, etc., and this, of course — there was a tremendous outcry from indigenous peoples, not only in this hemisphere, but around the world, stating that this is just another example of racism against indigenous peoples, and our problems have not gone away from that point in time ’til today.

AMY GOODMAN: One of the major sites where there is protest every year on this day is Denver.

ROBERTO MUCARO-BORRERO: Yes. That was actually the first state-sponsored celebration of Columbus Day in the United States, 1905. And so, I think it’s very significant that one of the largest demonstrations against the Columbus Day holiday and for the abolishment of the Columbus Day holiday is happening in Denver, and this has been going on, the protests have been growing every year. This weekend they had many educational activities, a march, etc., happening over there. And so, you know, we support them, as well, in what they are doing.

AMY GOODMAN: I wanted to ask, Brenda Dardar-Robichaux, on this day, your thoughts with the Houma Nation in Louisiana?

BRENDA DARDAR-ROBICHAUX: I think it’s still is a sad situation, because, let’s face it: Columbus was a slave trader and Indian killer, and he doesn’t deserve parades and holidays. And this should not be a day of celebration; it should be a national day of mourning. And I actually worked for the Lafourche Parish School Board, Indian Education, and I’m often asked to do presentations in the school system. And I know when I was growing up we were not taught the true story of Columbus. And so, I always use that as an opportunity to give our perspective of Columbus and the truth about what he has done to indigenous people. And I’m happy to say that it finally is being addressed in the school system by some teachers who choose that the truth be told and that the true story be shared with young minds, and so it is something that finally the school system is addressing and that the true picture of Christopher Columbus is coming.

CHARLES VERDIN: Yeah, we never really celebrated Columbus. Our people never did celebrate it. It just comes and goes just like another day.

AMY GOODMAN: Roberto Mucaro-Borrero, where were you born?

ROBERTO MUCARO-BORRERO: I was actually born right here in New York City. My parents came from the island of Borikén, which we say in our Taino language is the indigenous name for the island of Puerto Rico. My family comes from a town called Guayanilla, which is a coastal town that extends into the hill lands, and that’s where I learned about my native heritage from my grand father and his brothers over there when I was very young, as my family brought me back to the island when I was just a little baby.

AMY GOODMAN: What about international solidarity on this issue? What is happening? What kind of organizing?

ROBERTO MUCARO-BORRERO: Well, I think, besides this local initiatives and this national campaign to abolish Columbus Day, we are seeing an increase in international solidarity. I don’t know if you are aware, but in 2002, President Chavez in Venezuela, there was a group of people who actually toppled the Columbus statue in the square, and President Chavez proclaimed October 12 Indigenous Peoples’ Resistance Day, instead of Columbus Day, acknowledging the genocide of indigenous peoples and also the enslavement of African peoples. So this was his statement to support, and we see other protests and gatherings happening from down in Chile all the way up through Canada, and even as far as Hawaii, where, quote/unquote, the day over there of “celebration,” quote/unquote, is Discoverer’s Day, because they didn’t have Columbus, but Captain Cook. So, it’s the same situation even as far as over there.

So there is a solidarity happening with all of these people, with all these people connecting, letting folks know what’s happening, because we don’t really have coverage. As you can see, the system that’s been ensued in this hemisphere for these past 500 years, Native peoples are still invisible. We have the situation of our dear relatives that were affected by Katrina and Rita, and still the mainstream media has not covered this. And I think this is true in the school systems. We see that we are still learning a mythical, chronological story about Columbus and his role in discovering America, when he actually never even set foot in the United States.

ROBERTO MUCARO-BORRERO: Well, he actually landed in the Caribbean islands and only hit South America, the northern coast of South America and off the coast of Mexico in the Yucatan area. These were the only places that he actually visited. So, it’s interesting that while many Latin American countries are celebrating what they call La Dia de las Razas, or the Day of the Races, which is supposed to talk about the coming together of the Spanish and indigenous races, that the United States, a country where he never actually set foot, is celebrating this as a federal holiday, one of the nine recognized federal holidays. So I just find that interesting. And especially considering the controversy and what he’s, even in his own writings, he’s admitted to. And again, if we look at the Convention Against Genocide, we know what happened here in the Americas qualifies under that convention as genocide.

AMY GOODMAN: Brenda Dardar-Robichaux of the Houma Nation, after Katrina, working with your nation there and then looking at this day, Columbus Day, are there politicians who have dared to take on this issue of Columbus Day, Christopher Columbus, quote, “discovering the New World,” or perhaps, changing the name of this day?

BRENDA DARDAR-ROBICHAUX: No, not in our community, not at all. It’s not even a thought in their mind. It’s nothing that they are going to address or even consider.

AMY GOODMAN: Well, I want to thank you all very much for being with us. I want to thank Brenda Dardar-Robichaux, Principal Chief of the United Houma Nation; Charles Verdin, Chair of the Pointe-au-Chien Indian Tribe; and Roberto Mucaro-Borrero. If people want to find out more information, where on the web can they go?

AMY GOODMAN: And we will link to it at DemocracyNow.org. I want to thank you all for being with us. 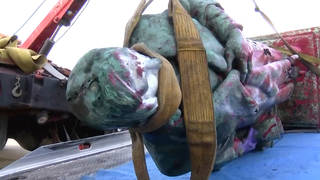