As we continue our look at Indigenous Peoples’ Day, we go to Albuquerque, New Mexico. We’re joined by Jennifer Marley, a member of The Red Nation, a citizen of San Ildefonso Pueblo. She’s a Ph.D. student in the American Studies Department in University of New Mexico The Red Nation, which helped lead a campaign in 2015 to officially recognize Indigenous Peoples’ Day in Albuquerque, New Mexico.

Jennifer, if you can talk about how you’re recognizing this day? And also respond to President Biden, the first president to officially recognize Indigenous Peoples’ Day.

And this year, Biden signed this proclamation. And we were all looking at it yesterday morning when it came out, and we were kind of laughing at the irony that although he signed this proclamation, Columbus Day still is not abolished or redacted. It’s still recognized. And so, like Roxanne said, it’s a contradiction. And we also know that Indigenous Peoples’ Day is being coopted not only by state governments and the federal government, but by even city officials. And we’re actually dealing with that this year locally. And again there’s irony, because the city gave us such pushback when we were first trying to implement it back in 2015.

AMY GOODMAN: So, can you talk about what you’re doing in New Mexico? I mean, it’s expected that thousands of people will be pressing on a fossil-free America. In Washington, D.C., People vs. Fossil Fuels is the major event, thousands taking direct nonviolent action in the nation’s capital to demand President Biden end the era of fossil fuels. Talk about that organizing and New Mexico’s.

JENNIFER MARLEY: Sure. So, we’re actually sending some Red Nation folks up to D.C. tomorrow to join that. And, you know, we always make sure that our struggles are connected to those that are happening not only around — you know, throughout the nation but throughout the world. Internationalism is very important to us, because when we’re talking about resource extraction, we can’t delink it from the global chain of resource extraction. And so, we know that this is a fight that Indigenous peoples are at the forefront of all around the world.

We know that Native lands are disproportionately used for resource extraction. And here in New Mexico, we really — we refer to New Mexico as, you know, what is a legal resource colony, a contemporary resource colony, because of the way resources are extracted here at such high rates. So, there’s gas and oil. We know that New Mexico became the second-biggest oil-producing state in the United States this past year, which really translates to being one of the biggest oil producers in the world.

And we know that this is also the birthplace of the atomic bomb. It was actually — the Manhattan Project took place on my peoples’ lands. And it’s one of the only states where the entire resource — or, the entire supply chain for the construction of a bomb can take place within this one state, so much so that if New Mexico were to secede as its own nation, it would automatically be the world’s third-strongest nuclear superpower.

And so, resource extraction literally shapes the economy of New Mexico. Lawmakers are constantly reminding us that we need to be in favor of further resource extraction because it’s what funds education and it’s what funds our basic needs here as New Mexicans. And so, we have been fighting a long fight against resource extraction here, especially as it pertains to the Diné community surrounding Chaco Canyon. And Chaco Canyon itself which is a site of ancestral significance for all of us here in New Mexico, all of us Indigenous people here. And so, that is a fight that continues, and, you know, it’s going to be a long one — right? — because right now, as it stands, the state officials and government officials continue to look at New Mexico as a source of wealth because of the abundant resources here, that exist primarily on Indigenous lands.

AMY GOODMAN: I’d like to turn to a recent tweet from Nick Estes, a citizen of the Lower Brule Sioux Tribe, a member of The Red Nation, assistant professor of American studies at the University of New Mexico, where you are, Jennifer. On Saturday, he tweeted, “Biden didn’t abolish the genocidal celebration of Columbus Day, which has been a primary demand of the Indigenous Peoples Day movement. He just 'all lives mattered' it.” If you could also talk about the Red Deal? I mean, as the Democratic Party is fighting within itself to fight to — the progressives within it to push for this $3.5 trillion, 10-year deal that really focuses on the climate emergency, can you talk about what Red Nation’s demands are?

The second part is heal our planet. And so, with this, we’re looking at the actual remediation of lands, which requires, of course, first and foremost, land back, right? That’s the big call that Native people have. And, you know, though it’s often misconstrued, unfortunately, even by the left, it’s something that has attached to it real material demands that are plausible, and it’s also not unprecedented when we’re looking at what decolonization looks like globally.

The third area is heal our bodies. So, in order to heal our bodies, we know that we need to heal the Earth. We need to make it so that the land we live on are not irradiated or poisonous and that we actually have access to land to sustain ourselves, that we can control the distribution and selling of our resources, and that the people themselves have a stake in how our economies are created. And also, of course, this relates to the assertion of sovereignty, true sovereignty for Native people, our ability to engage in trade and commerce with other nations outside the U.S. and, you know, maybe create some kind of plurinationalism, as many of our Indigenous relatives in South America have. And healing our bodies, of course, requires the reclamation of Indigenous foodways, waterways, ways of caring for the land, and our overall stewardship. We know that Indigenous people make up not a great population worldwide — I mean, much more than in the United States — but we caretake 80% of the world’s biodiversity. So it’s very clear that when the land is in Indigenous peoples’ hands, it’s able to thrive. The Earth is able to thrive.

AMY GOODMAN: Well, Jennifer Marley, I want to thank you for being with us, member of The Red Nation, a citizen of San Ildefonso Pueblo, speaking to us from Albuquerque, where major events are taking place today on Indigenous Peoples’ Day. We’ll also link at democracynow.org to our April interview with members of The Red Nation, co-authors of The Red Deal: Indigenous Action to Save Our Earth. 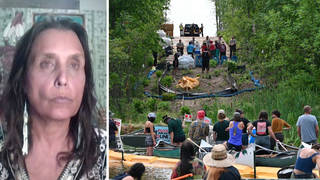