As the funeral of Pope John Paul II takes place in Saint Peter’s Square, we go to Rome to get a report on what is being called one of the most momentous funerals in world history. [includes rush transcript]

The funeral of Pope John Paul II is under way in St. Peter’s Square in Rome. Up to two million people are watching the service on giant television screens around the city in what is being described as one of the most momentous funerals in world history.

Four kings, five queens and at least 70 presidents and prime ministers are attending the open-air service. Hundreds of thousands of pilgrims have poured into the Vatican to attend the ceremony. Roman Catholics around the world are following the funeral on television or attending Masses in local churches.

John Paul’s 26-year leadership of the Roman Catholic Church was the third longest in history and he was the first non-Italian pope in over 400 years. During his papacy, he visited a record 120 nations and was seen in person by millions.

After his death, the pope’s body lay in state in St. Peter’s Basilica for four days, bringing millions of pilgrims streaming through the Vatican in a vigil that almost paralyzed Rome.

Today’s three-hour funeral ceremony was conducted by Cardinal Joseph Ratzinger, dean of the Sacred College of Cardinals, which will begin electing the Pope’s successor on the 18th (eighteenth) of April.

Italy closed the airspace over central Rome and called in extra forces, anti-aircraft missiles and patrol boats to guard the funeral. Authorities ordered all public offices, schools and museums to close and banned cars from the roads.

After the funeral mass, the pope’s coffin will be carried back into Saint Peter’s Basilica and laid to rest in a crypt after being enclosed in a zinc coffin and finally an oak casket.

AMY GOODMAN: Just before the program we spoke with Christian Science Monitor correspondent Sophie Arie in Rome. She described what was taking place in the capital.

SOPHIE ARIE: This morning we have seen the full pomp and circumstance of what’s being described as the biggest funeral in the history of the Vatican and possibly one of the biggest gatherings in one single place in world history. What we’ve seen is a very, very traditional ceremony, a Mass and a tribute led by Cardinal Joseph Ratzinger, the German number three under John Paul’s Papacy. And it was an emotional, deeply Christian ceremony looked on — looking on at the sides of the altar were, in fact, a gathering of world leaders from all religions and all races. But what we saw was effectively the evidence of the global reach of the Vatican in between the very traditional Latin readings and chants from the Bible. We saw a string of representatives of nations around the world, from the Philippines to South America to Germany and Burkino Faso. Just to give you an idea of the global reach of Catholicism, each of these countries gave a prayer in its own language. So we’ve heard Portuguese, Spanish, German, every language that the Catholic world speaks, and also we saw a string of representatives of some of those countries who played a part in setting down all the relative symbolic items that played a part in a Catholic Mass and they then were each blessed one by one by Cardinal Ratzinger.

This I describe just to give you a feel of the international reach of this event. Again, in the crowd of the ordinary citizens out in St. Peter’s Square, we saw flags from Poland, of course, predominately red and white flags of Poland, waving above the crowd, who were standing very still and very respectfully. It is a changing atmosphere from what we have seen in the past few days in Rome where there has been almost a football crowd crushing into the queue to try to see the Pope’s body before the time ran out. Today we have a much more austere and somber mood in the crowd, which is fitting for this obviously very sad, but very important occasion in which people are remembering John Paul II for the great role he played in 20th century history.

What we have is a major, major operation on the part of the Italian officials. The only sound that we’ve heard, along with a gentle chanting in Latin throughout this Mass this morning, has been the constant throbbing of helicopters overhead, watching out for — keeping a cover of the crowds, both to control the numbers of people moving through the city, but also obviously on high alert for any possible terrorist attack in these days of the global war on terrorism. Italian airspace has been closed today, traffic has been banned within the whole of the city of Rome, from the outer ring road inwards, meaning that the streets are empty and full of only pedestrians and pilgrims who we see walking around in a very unusual scene for Rome. Where mostly what we see is very well-healed tourists, now we have an army of youngsters mainly, dressed in traveling clothes and carrying backpacks and sleeping bags.

The other thing that has been moving about this morning’s ceremony is that we have seen that crowds who couldn’t reach St. Peter’s Square today have assembled all over Italy and in many other countries around the world, most particularly, of course, in Krakow in Poland, where there were moving scenes of huge crowds who gathered to watch the ceremony on giant screens many of whom were holding their rosary beads and crying as they thought of the moments that they remember most over John Paul II’s 26-year Papacy, which for Poland has greater resonance than for any other country. They feel so proud of this Pope. They call him their son. But many people I have spoken to have just simply paid tribute to him for putting Poland on the map in the world.

RAFFAELE MASTROLONARDO: Hello, how are you?

AMY GOODMAN: It’s good to have you with us. We heard the description just now of Sophie Arie describing the scene. Can you talk in Rome about the significance — though the Pope is seen as a man of the world, he also has a particular place in Italian politics.

RAFFAELE MASTROLONARDO: Of course, he had. I mean, what we saw today was pretty extraordinary. I mean, there were — if you look at the scene in the square, you could see many youngsters, so what this Pope did throughout his 25 years of Pontificate was using any communication, modern communication tools to, you know, reach out to youngsters. So this is also the problem that the Church is facing now looking for a successor. Because they know that many of the young people gathering there today were there because of him. Because of his, you know, great stature. Now they are facing this problem, what they are going to do afterward.

AMY GOODMAN: They’re talking about the man who conducted the Mass, Cardinal Joseph Ratzinger, Dean of the Sacred College of Cardinals, as a possible successor. What do you hear?

RAFFAELE MASTROLONARDO: Well, I think that he is not likely to be a possible successor. He is too old, first of all, and probably considered now too conservative. I think that the biggest dilemma now facing the conclave is whether they’re going for a young Pope, a very — for a long Pontificate or for what they call a transition Pontificate, a smaller one that doesn’t innovate that much. It all depends on which direction they’re going to follow. I think and many people here think that they are going through an Italian cardinal. Because, you know, Italian cardinals think that after 26 years of a foreign Pope, they want an Italian Pope back on the Vatican.

AMY GOODMAN: Bishop Desmond Tutu has been calling for a Pope from Africa.

RAFFAELE MASTROLONARDO: Well, Desmond Tutu has called for a Pope from Africa, and actually the Nigeria’s Cardinal Arinze, he is pretty likely to get to the Vatican. According to English bookmakers he is tied with Dionigi Tettamanzi, Milan’s Cardinal. He is one of the favorite. But, you know, we have a saying here in Italy that if you get into the conclave as a Pope, you’re going out of the conclave as a cardinal. So, I mean, it’s safe not to put too much faith on this speculation about the next Pope, particularly if they point out to a particular figure, because even John Paul II was not a favorite when the conclave that elected him started.

AMY GOODMAN: Raffaele Mastrolonardo, a last comment before we wrap up.

AMY GOODMAN: Any last thoughts before we wrap up?

AMY GOODMAN: I’m asking if you have any last comments before we wrap up. Well, we will leave it there. Raffaele Mastrolonardo, I want to thank you very much for being with us, a freelance journalist speaking to us from Rome, Italy. 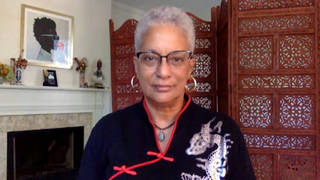