We speak with Carolyn Ho, the mother of Lt. Ehren Watada, the first officer to publicly refuse to serve in Iraq. He will face his prosecutors next month at a pretrial hearing. Ho was recently in Washington, D.C., where she met with lawmakers to support her son’s case. [includes rush transcript]

AMY GOODMAN: We also turn now to the case of Ehren Watada. He’s the first officer to publicly refuse to serve in Iraq. He will face his prosecutors next month at a pretrial hearing on June 22. Ehren Watada refused to deploy with his Fort Lewis base unit and was subsequently charged with one count of missing troop movement and two counts of speaking contemptuously of the president. In September, additional counts were added. He was charged with conduct unbecoming an officer and a gentleman. Ehren Watada faces six years in prison.

Watada’s mother, Carolyn Ho, has been outspoken in her support of Ehren. She has just come from meeting with officials in Washington, D.C., pleading her son’s case and joins us in the studio here in New York. Welcome to Democracy Now!

CAROLYN HO: Thank you very much.

AMY GOODMAN: What is the state of Lieutenant Ehren Watada’s case, your son?

CAROLYN HO: At this point, as I have gone through the halls of Congress, I was told in some places that I should be confident that the military will mete out justice and that the Congress should not be interfering with a military court, that there are laws that govern the separation of powers. And we were attempting to explore ways that the Congress could support. It’s obvious that our executive branch has not abided by the Constitution, which my son has sworn to uphold, and that oversight needs to occur. And I have asked that the Congress at least consider, or congressionals consider, a sign-on letter that would call for the dismissal of the charges and for the military to accept his resignation. But I was told that that was not really something that congressionals can actually do.

AMY GOODMAN: Which congressmembers did you meet with?

CAROLYN HO: I met with two of our Hawaii congressional delegates, and also I met with Maxine Waters. However, Maxine Waters is saying that she is willing to assist in any way possible. And she is, as chair of the Out of Iraq Caucus, is saying to her aide, please investigate and get back to me on the kinds of strategies we can pursue.

AMY GOODMAN: Carolyn, Ehren Watada is based at Fort Lewis, Washington, but he’s from Hawaii, which is where you’re from.

AMY GOODMAN: When did you first hear that he was going to refuse to deploy to Iraq? And what was your reaction?

CAROLYN HO: On January 1, 2006, my son called me. And when he made the announcement that he was going to not deploy, I was stunned. And we got into a huge, huge fight on the phone. And I said, “Can you not reconsider what you’re about to do? Do you realize what is going to happen? You’re one little lieutenant facing the huge military-industrial complex, and what do you expect to gain from this? Why can you not just finish off your tour of duty and just put it behind you, and then you will go on with your life?” And I finally was so frustrated with him, I hung up.

And then, I went through a period of thinking all of this through, because at that point, I felt so rejecting. I felt so disappointed. I felt so angry. I felt so hurt. Just a mixture of emotions that I could not even deal with, myself. And so, as I thought about things, I thought about Gibran’s poem, about — it’s The Prophet, and it’s about our children and that they come through us, but they don’t belong to us, and that I realized I needed to let go and that he needed to fulfill his own expression, that — whatever it was meant to be. And I realized that beyond trying to protect him, I needed to support his decision.

So I called him back, and I said to him, “Ehren, I really love you, and I just didn’t want anything to happen to you.” And he said, “Mom, I really know where all that comes from. And I really know that you’re trying to be protective.” But he said, “You know, I felt really betrayed by the fact that you were trying to talk me out of what I really felt my conscience was dictating.” And he said, “It’s not a matter of my just deciding that war is a lousy idea, and I don’t want to go. And it’s not a matter my being afraid to die. I’m like any other human being. Of course, self-preservation is something that drives all of us, but it, for me, is a matter of conscience, and you were asking me to betray my conscience.” And he said, “I can’t do that.” And he said, “You’ve always taught me to do the right thing. So why are you asking me now not to do the right thing?”

And finally, I said, “But, you know, I thought about it, and for me, it has been the first step in a journey of a thousand miles to begin to realize that, what is life if you cannot live with your conscience?” And my son has said, “I would rather languish in prison than be responsible for the deaths of my soldiers and be responsible for their committing war crimes and for amplifying my participation in this illegal war.” And I totally support him. I totally do. And I will continue to speak out until justice is served.

AMY GOODMAN: Both of your children being court-martialed at Fort Lewis. What has it meant for you to make contact with other parents in your situation?

CAROLYN HO: Well, I have felt very close to Sara. Knowing that our children were at the bases at the same time, seeing her go through the same kind of agony that I was going through, I think that, in a sense, there is a bond between us that will never go away. We are both pursuing justice for our children. We are both wanting to see that the larger issue is addressed. For her, it’s, you know, that the rights of women in the military are recognized and that women can go into the battle, but then understand that they will be protected by their own troops.

AMY GOODMAN: We only have a minute, but what is the response in Hawaii to what your son has decided and to you, as a mother who is now not only supporting your son personally, but speaking out for him?

CAROLYN HO: In Hawaii, I believe that the movement is growing in support of him. Initially, I think that the community was quite divided. And people in the 442nd, who had fought during World War II, who had come home with wounds, I would say that particular 442nd group, I would say most of those soldiers came back with PTSD and with wounds that lasted a lifetime, they were exceptionally critical of my son, feeling that his act was an act of cowardice, that it brought shame onto the Japanese community.

And on the mainland, on the continent, people have said that it’s reawakened the wounds between the no-no boys, who had refused to deploy, based on the fact that their constitutional rights were overridden, and their families and they, themselves, had been put into relocation camps. They took a stand, but there had been a rift.

But I would say, at this point, people have gotten on board. The local JACL has led the coalition. And different groups, the interfaith alliances, groups on the left, in the middle and the right, have come on board.

AMY GOODMAN: Carolyn Ho and Sara Rich, I want to thank you both for being with us. 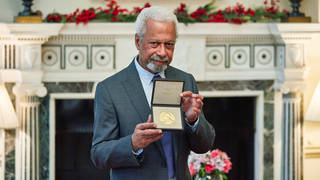