Over 1.5 Million March for Immigrant Rights in One of Largest Days of Protest in U.S. History

Over 1.5 million people took part in May Day demonstrations to support immigrant rights in one of the largest days of protest in the country’s history. Across the nation immigrants refused to go to work or school in what was dubbed “A Day Without Immigrants.” Major demonstrations were held in dozens of cities across the country. We hear some of the voices that spoke at rallies on the historic day. [includes rush transcript]

In what is being called the largest day of protest in U.S. history, over 1.5 million people stayed away from work and school Monday to take part in nationwide marches in support of immigrant rights. In Chicago, organizers claimed a turnout of 700,000 people. In Los Angeles, at least 500,000. Here in New York, over 100,000 marched down Broadway. At least 75,000 people turned out in Denver, with thousands more in cities including San Jose, Phoenix, Milwaukee, New Orleans, Las Vegas and nearly 50 others.

Businesses across the country were closed as workers walked off the job for an economic boycott dubbed “A Day Without Immigrants.” Meat producing companies, including Tyson foods, Cargill and Perdue Farms closed down more than two dozen plants employing over 20,000 people. In Phoenix, protesters formed a human chain to block off Wal-Mart and Home Depot stores. Traffic was down 90 percent at the main ports in Los Angeles and Long Beach, the country’s largest. The boycott also attracted large student involvement. In Los Angeles, over 72,000 middle and high school students — about one in every four students–were absent from school.

We go now to some of the voices from this historic day:

Here in New York, we caught up with demonstrators just steps from our firehouse studio in Chinatown.

StoryDec 06, 2022Jeffrey Sachs: A Negotiated End to Fighting in Ukraine Is the Only Real Way to End the Bloodshed

JUAN GONZALEZ: We go now to some of the voices from this historic day. We begin in Chicago, where Democratic Congressmember Luis Gutierrez addressed the day’s largest rally.

REP. LUIS GUTIERREZ: If we were in Boston and it were 1850, 1860, we would be reading in the newspaper about the dirty, the uneducated people who were coming to this country, coming to this country and destroying America, and they would be referring to Irish immigrants. If it were the turn of the century and it were 1910 and we were in New York City and we picked up the New York Times, we’d read “Only by the rule of law could we hope to control these people,” and they would be referring to Italian immigrants. You know what? They were wrong in Boston about the Irish. They were wrong in New York about the Italians. And the Congress and Sensenbrenner was wrong about immigrants across this country today.

What we want — what we want is a legalization process that allows all of those that work hard, are of good moral character, wishing to raise their families through sweat and toil to make America a better country, a road, a pathway to their legalization, so that they can come out of the shadows of darkness, of discrimination, of bigotry, of exploitation, and join us fully. I say to the Congress of the United States: You have two options. Number one, show the political will. Put the resources forward to deport 12 million people, and if you don’t have that, then do the right thing and legalize 12 million people.

JUAN GONZALEZ: That was Democratic Congressmember Luis Gutierrez speaking in Chicago. We move to Los Angeles where California Senate Majority Leader Gloria Romero talked about a bill passed by the state legislature in support of the boycott.

GLORIA ROMERO: It is my honor to march with the people today, constituents that I represent here in Los Angeles. It is a magnificent day in history, and I’m very proud to present to you, the organizers and the people, a copy of the resolution that was passed by the California State Senate recognizing today as the great American boycott. And we can look back and see that using a boycott is part of the American tradition, from the Boston Tea Party to Rosa Parks, Dr. Martin Luther King and Cesar Chavez. All we want is fair immigration reform and a recognition of the role of immigrants in this country. Si, se puede!

BILL ROSENDAHL: This very moment is a defining moment for the United States of America. This is truly a civil rights issue in the 21st century. What the Republican House of Representatives did in calling undocumented immigrants a felon is a disgrace. If there is a crime, it is the crime of leaving 11 million people in the shadows in this great country. We are all Americans! And I say to the Republican-controlled Congress: We want a path to citizenship for all of us. And if you don’t see leadership coming from the Republican White House and the Senate and the House of Representatives, throw them out this November. And the last point, it is a crime not to give undocumented immigrants their driver’s license. They must be able to have that so we all can be Americans together.

GERARDO LORENZ: I feel very proud of you. I feel proud to live in this nation, and that is why in California we’re sending the loudest message, the clearest message, to the Congress of the United States: Here we are. We are asking for legalization. We won’t accept anything less.

AMY GOODMAN: Gerardo Lorenz of radio station KTNQ in Los Angeles. Here in New York, we caught up with immigrants, formed a human chain just blocks from our Firehouse studio here in Chinatown.

AMY GOODMAN: I’m Amy Goodman, host of Democracy Now!, standing here on Canal Street, where hundreds of people have come to form a human chain. Many of them are holding up signs that say “We Are America.” Some are holding signs that say “12:16” for December 16, the day the House passed a bill that would criminalize immigrants who don’t have legal documents and those that help them. We spoke with some of them.

GREG DURANDUS: My name is Greg Durandus. I’m from Haiti, and I’m here to support the many Haitian immigrants that live in the U.S. and especially in New York. And I’m here to tell the lawmakers how angry I am, because they don’t show respect to the immigrants, and this is an immigrant country.

MARGARET CHAN: My name is Margaret Chan. I’m from Hong Kong. I came over from Hong Kong with my family when I was seven years old, so I am an immigrant. I am here to support all immigrants, and I’m here to show the people in Washington that it’s a stupid idea to make it a felony for people who are undocumented here. I’m an immigration attorney. Does that mean I will be charged with a felony for helping my clients? You know, will doctors have to file, like, their Hippocratic Oath and not help an undocumented person? Is this not the most ridiculous thing you’ve ever heard of?

ANA: My name is Ana, and I’m here to support the immigrants. I’m an immigrant myself, originally from El Salvador in Central America.

JESSIE: I’m Jessie, and I was born in Puerto Rico, family is Puerto Rican.

AMY GOODMAN: And why are you here today?

JESSIE: I’m here in support of all immigrants and just for a fair chance in this country.

AMY GOODMAN: Now, you’re American. Why do you choose this day of immigrants to stand up?

JESSIE: Because, like many other people, I came to this country, despite the fact we’re not considered — we’re part of the U.S., Puerto Rico, but I still think we need to support everyone.

BON YUEN: I’m from China. My name is Bon Yuen.

AMY GOODMAN: And what is your message today with your sign, “We Are America”?

TOMIYA: My name is Tomiya. I was born in New York, and I’m Japanese American. My family has been here for over a hundred years, and I’m here to support immigrants and immigrant rights.

TOMIYA: I think that particularly for Asians and people of color, you know, they don’t look like they’re American, and even though my family has been here for generations, are still treated like foreigners. I certainly understand the racism and discrimination that recent immigrants face, and I’m particularly concerned with the PATRIOT Act and how that’s affecting Arab communities, because I am the descendant of Japanese Americans who were interned. I certainly understand how dangerous the situation is, how it affects all Americans here today.

AMY GOODMAN: People forming a human chain in Chinatown in New York on a day without immigrants. 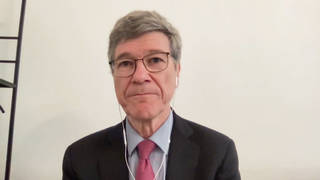 Jeffrey Sachs: A Negotiated End to Fighting in Ukraine Is the Only Real Way to End the Bloodshed