AMY GOODMAN: I want to go to the private military contractor Blackwater. Last week, your organization, Center for Constitutional Rights, sued Blackwater on behalf of the families of three Iraqis killed by Blackwater forces on September 16th in Baghdad. President Bush was asked about Blackwater during his news conference on Wednesday.

REPORTER: As commander-in-chief, are you in control of and responsible for military contractors in Iraq? And if not, who is?

REPORTER: Are you satisfied with their performance? And, if not, what are you doing to satisfy yourself that —

PRESIDENT GEORGE W. BUSH: I will be anxious to see the analysis of their performance. There’s a lot of studying going on, both inside Iraq and out, as to whether or not people violated rules of engagement. I will tell you, though, that a firm like Blackwater provides a valuable service. They protect people’s lives. And I appreciate the sacrifice and the service that the Blackwater employees have made. And they, too, want to make sure that if there’s any inconsistencies or, you know, behavior that shouldn’t — that ought to be modified, that we do that.

MICHAEL RATNER: Well, you can already see the President beginning to distance himself from Blackwater, saying there’s an investigation going on. You see what you said in the earlier part of the program that the State Department is considering not renewing the contract. I think Blackwater is considering not even applying, because they know they’re not going to get it. And then, of course, when he says they’re doing their job, yeah, if their job is to terrorize the Iraqi population, they’re doing their job.

AMY GOODMAN: Wednesday was not the first time that President Bush was asked about Blackwater. In April of last year, President Bush spoke at the School of Advanced International Studies at Johns Hopkins University. After his talk, he took questions from students at the school.

STUDENT: My question is in regards to private military contractors. The Uniform Code of Military Justice does not apply to these contractors in Iraq. I asked your secretary of defense a couple of months ago what law governs their actions. Mr. Rumsfeld —

PRESIDENT GEORGE W. BUSH: I was going to ask him. Go ahead. Help.

PRESIDENT GEORGE W. BUSH: Yeah, I appreciate that very much. I wasn’t kidding. I was going to — I pick up the phone and say, Mr. Secretary, I’ve got an interesting question. This is what delegation — I don’t mean to be dodging the question, although it’s kind of convenient in this case, but never — I really will. I’m going to call the secretary and say you brought up a very valid question, and what are we doing about it? It’s — that’s how I work.

MICHAEL RATNER: Well, Amy, I mean, you want to weep for America when you see that. When you see the president making a joke about Blackwater, which has been alleged to be involved in all kinds of incidents, killings, etc., and then the audience, press people, just laughing about it, you know that this country is not in a great place. I mean, this is a private military force, essentially, operating overseas in Iraq that’s been accused of all kinds of things, and they’re making — including murders of Iraqi citizens — and they’re making jokes about it. The president and, no less guilty, the audience of reporters who were looking at it.

AMY GOODMAN: Actually, the person who asked that was just a student at Johns Hopkins. It might be a lesson to some reporters on how to ask a question.

MICHAEL RATNER: I think so, Amy.

AMY GOODMAN: On Sunday, Blackwater founder Erik Prince appeared on CNN. He was asked to respond to the CCR — your — lawsuit. This is what he said.

ERIK PRINCE: First, the lawsuit, the lawyers, the trial lawyers that filed this lawsuit are the same guys that defended the World Trade Center bombings in 1993, the Blind Sheikh, and have defended a bunch of killers of FBI agents and other cops. So this is very much a politically motivated lawsuit for media attention.

MICHAEL RATNER: Well, obviously, I mean, this is like a transparent attempt to try and divert attention from Blackwater’s actions, particularly in the September killings, where there’s many, many witnesses and much evidence that basically says no one fired on Blackwater, Blackwater just fired and killed 17 people. So that’s an obvious attempt. It’s barely worthy of a response, because that’s all that’s going on.

Although the killing of the two FBI agents is important to bring out, because what he’s speaking of there is the man who’s in prison right now, Leonard Peltier, for those two killings at the reservation in South Dakota, and that man is unjustly — that Indian man is unjustly in that prison. And so, that’s a case that particularly is galling, because you have this Indian leader who’s been unjustly imprisoned for 25 years.

AMY GOODMAN: We’ll leave it there. Michael Ratner, president of the Center for Constitutional Rights, thank you for joining us. 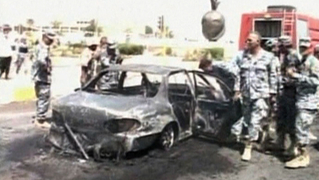