AMY GOODMAN: While the situation in Pakistan is front-page news in the U.S., across the world, as well, the media has focused little attention on a much more dire humanitarian crisis. In Somalia, at least eighty people have died in the capital of Mogadishu in heavy fighting between U.S.-backed Ethiopian troops and Somali fighters. Most of the dead are believed to be civilians. Ethiopian tanks and artillery battered parts of Mogadishu after an Ethiopian soldier was dragged through the streets. Residents of Mogadishu accused Ethiopian troops of attacking civilians.

ASHA GULED: [translated] We are witnesses to the problems the Ethiopian troops brought for us. They killed every person they saw in the area, and we have now decided to flee the capital, Mogadishu.

AMY GOODMAN: The U.N. estimates 100,000 people have left Mogadishu in the last two weeks to escape the fighting. U.N. Secretary-General Ban Ki-moon said one-and-a-half million Somalis are now in need of humanitarian assistance. Human Rights Watch says the failure of the international community to end the violence in Somalia reflects a contempt for the value of African life. Meanwhile, U.N. Humanitarian Coordinator Eric Larouche issued a grave warning about the humanitarian situation.

ERIC LAROUCHE: The humanitarian crisis is very bad. It’s the worst in humanitarian crises that you have had in the last 15 years. It reminds us of the beginning of the '90s, so it's not a very good news. We had, a few months ago, only — I mean, we had already 400,000 people that were displaced because of the conflict and because of the natural disaster. Today, we have 850,000 people, so we have more than double the number of people that are displaced in Somalia.

AMY GOODMAN: The U.S.-backed Somali government has also launched an attack on the media. On Monday, authorities closed Shabelle Radio and briefly detained two of its senior staff. On Tuesday, heavily armed troops raided Radio Banadir. Eight local reporters have been killed in the line of duty in Somalia this year.

Salim Lone is a columnist for the Daily Nation in Kenya, a former spokesperson for the U.N. mission in Iraq. He has been closely following the situation in Somalia, joining us on the line from Nairobi.

Salim, welcome to Democracy Now! Can you describe the latest that’s happening in Mogadishu now?

SALIM LONE: Well, let’s begin, Amy, first, talk about the [inaudible] of Somalia, because the world just does not seem to be interested. You just read out a horrendous list of terrible events and massacres and, you know, violations of human rights, war against — I mean, crimes against humanity. And yet, this is not news either for the newspapers or the TV or even for Western leaders, who are completely silent. They’re unable to see that the situation has spiraled completely out of control.

And this government, that had been put in there with Western support, it’s comprehensively been defeated. It is only surviving by intimidating and killing scores and scores of people. 400,000 refugees, displaced people, in the last 15 years, the worst years everybody thought, and then 450,000 more refugees in the last few months, and this as a result of a war waged by the United States and Ethiopia.

And increasingly — on a smaller scale, obviously, but increasingly — the situation is beginning to resemble Iraq. You mentioned the soldier dragged through the streets, desecrated, and the resulting massacre of so many innocent people, including an entire family of 10 people, although one child is gravely injured but not dead. The same thing happened in Fallujah, that one terrible desecration by a few militants led to the killing of hundreds. We have, as in Iraq, in Somalia now IEDs. We have mortar rounds being launched on government and other forces. And we have mass civilian casualties. It’s only these mass suicide bombings that are to come.

And the world is completely silent. The government has tried everything, from the bombing of civilians in hospitals, killing journalists — I think it should be clear: this government has killed journalists, not that 10 journalists have died. Some of them, or even many of them, have actually been killed by the government. And yesterday, it closed the largest independent media house in Somalia, Shabelle Networks. So this situation has to be arrested somehow, and it can only be arrested by the international community.

AMY GOODMAN: Doing what? The international community doing what?

Mr. Ban Ki-moon, the secretary-general of the United Nations, wrote reports to the Security Council at the end of last year painting such a grim picture, that he said if European and other troops are there in order to help bring democracy, it was a joke. He also proposed a peacekeeping force, a U.N. peacekeeping force for Somalia. But now, he rightly is saying that isn’t viable.

Ethiopia itself has repeatedly said, “Oh, we are only in there for a brief period, but we will be leaving shortly.” Now, the prime minister of Ethiopia’s adviser said clearly, “We are not leaving Somalia until things are stable.”

President Abdullah Yusuf was in Nairobi yesterday, and he gave a press conference here in which he poo-pooed all these developments, and he said, “You know, when the elephants fight, the grass suffers,” meaning if civilians are being killed, what can we do? They are being killed because there is fighting between forces. And he said the situation in Somalia is actually much better than it has ever been since the start of the civil war 15, 16 years ago.

AMY GOODMAN: What is the U.S.’s interest in supporting the Ethiopian troops in Somalia?

SALIM LONE: I didn’t hear that, so, sorry?

AMY GOODMAN: What is the United States’s interest in supporting the Ethiopian troops in Somalia?

SALIM LONE: Well, I mean, the U.S., having brought to power a client proxy regime, does not know how to extricate itself from the situation. They are afraid now that the Somalis who were in power, the Islamic Courts Union, which had brought stability to nearly all of Somalia, and with their ouster, they have seen the situation subsequently radicalize many, many more Somalis who previously were not radicals. I mean, Somalia — actually, Somalis are a very moderate group of people.

So somebody has to act. The facts are all known. It is — there are no secrets here. Everybody knows. The Europeans know, the Americans know, the African Union knows. But no one dares to take a step, unless the U.S. does something. And the U.S. seems wedded to keeping in place an unpopular dictatorial, tyrannical regime, which can only exist through the blatant use of force, as exercised primarily by the Ethiopians. So it’s a situation that really is the responsibility of the international community, because that community created it.

AMY GOODMAN: The U.N. has called this the worst humanitarian crisis in Africa. How much attention is this getting in Africa? It gets very little here in the United States.

SALIM LONE: Well, certainly in Kenya and the neighboring countries, it is getting a little more attention than it is there. But unfortunately, again, you know, Somalia is a dangerous place. There are very few international journalists there to begin with. And we — you know, our papers here and our media here is not strong enough to sort of send journalists to cover this instability, so it is not getting the kind of coverage it deserves, especially in Kenya, which is a neighboring country and which unfortunately was involved in its own program of kidnappings and renditions to Guantanamo, to secret prisons in Ethiopia.

You know, this is one of the gravest crises in the world at the moment. But because it is Somalia, because, as Human Rights Watch said, this is African blood being spilled, there is no action being taken. And no one is even advocating any action, leave alone the people advocating it and some who are resisting. There is no plan on the horizon, that I can see, which might help at least bring this crisis — not to an end, at least mediate it a little bit. No effort whatsoever. The reconciliation conference that the government put on was a fiasco, because it refused to share power. This government, even though it is severely under stress and under attack and incapable of governing, will not share power with anyone. And they’re being allowed to do so by their Western backers.

AMY GOODMAN: Salim Lone, we only have a minute. You were the U.N. spokesperson in Iraq, survived the attack on the U.N. compound that many others did not survive, now back in Kenya. You knew Asma Jahangir, the woman we just spoke to under house arrest, chair of the Human Rights Commission of Pakistan.

SALIM LONE: Yeah, she — I’m sorry, I believe she wants to be very careful about not — she’s under house arrest. The U.S. must stop military aid to Pakistan, to begin with, because Musharraf is using it against his own people. And I don’t agree with Asma that military aid should be given if it is used against criminals. Military aid is not to fight criminals; military aid is to fight wars against enemies from outside the country, number one.

And then the other issue is, there can be no peace in Pakistan unless the situation in Afghanistan is sort of mediated. The notion, the Western notion, that it is the border areas in Pakistan which are the root cause of the conflict in Afghanistan is a complete joke. The Taliban are getting stronger and stronger within Afghanistan. And there’s only one solution to it. The Americans and NATO cannot defeat Taliban, it is clear. There must be, either publicly or through some back channels, there must be an agreement made with the Taliban so that this conflict comes to an end. Pakistan’s deterioration into extremism and the guns and the violence began because of Afghanistan, to begin with, with the Western aid in billions of dollars in weapons coming into Pakistan. And it intensified after 9/11, with this latest, you know, occupation of Afghanistan. It is that occupation that must end for the sake of Pakistan, as well as for the sake of Afghanistan and for the Western world, including the United States.

AMY GOODMAN: Salim Lone, I want to thank you for being with us, columnist with the Daily Nation in Kenya, former spokesperson for the U.N. mission in Iraq.

Hate Crimes — Symbolic and Violent — on Rise Across U.S.

NEXTHate Crimes — Symbolic and Violent — on Rise Across U.S. 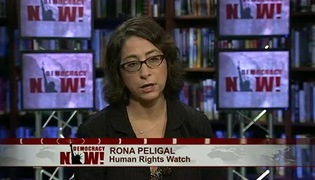