A new report by Human Rights Watch accuses all sides in the Somali conflict of committing war crimes. The report, “'You Don't Know Who to Blame’: War Crimes in Somalia,” calls on all sides to immediately end abuses against civilians, hold those responsible to account, and ensure access to aid and free movement of people fleeing conflict and drought. The report is highly critical of the Islamist group al-Shabab, as well as the U.S.-backed Somali Transitional Federal Government and the African Union peacekeeping forces. Human Rights Watch is calling on the United States and other international donors to withhold financial and military aid to the Somali transitional government, unless the government sets clear benchmarks for the respect of international humanitarian and human rights law and accountability for serious abuses. We look at the connection between the conflict and the devastating famine with Rona Peligal, deputy director of the Africa Division for Human Rights Watch. [includes rush transcript]

AMY GOODMAN: The United Nations says in the Horn of Africa more than 12 million people are on the verge of starvation. Now the U.N. World Food Programme says it’s investigating the theft and sale of food intended for famine victims in Somalia. The Associated Press has uncovered eight sites in Mogadishu markets where thousands of sacks of food stamped with the WFP logo were being sold.

CHRISTIANE BERTHIAUME: [The World] Food Programme condemns, in the strongest possible terms, any action that would take even the smallest amount of food from starving and vulnerable Somalis, and we will rigorously investigate any allegation of theft of humanitarian food. WFP is confident that the vast majority of humanitarian food is reaching starving people in Mogadishu and saving lives every day. The Associated Press story alleging that thousands of bag have been looted or stolen would equal less than one percent of one month’s food distribution in Somalia.

AMY GOODMAN: That was Christiane Berthiaume, press spokesperson for the World Food Programme.

According to the U.N., more than 3.2 million Somalis are in need of food aid, nearly half the country’s population. The ongoing crisis has already claimed the lives of 29,000 Somali children under the age of five.

The World Bank Group’s Food Price Watch says record high global food prices have contributed to the crisis in the Horn of Africa and put the poorest people at continued risk.

JOSÉ CUESTA: Soaring prices in connection with, of course, the drought and other issues like political instability, conflict, civilian unrest and displacements have contributed to a catastrophe, affecting more than 12 million people in the Horn of Africa.

AMY GOODMAN: That was José Cuesta, senior economist of the Poverty Reduction and Equity Group at the World Bank.

AMBASSADOR HARDEEP SINGH PURI: The members of the Security Council urged all parties and armed groups to ensure full, safe and unhindered access for the timely delivery of humanitarian aid to persons in need of assistance across Somalia and to take appropriate steps to ensure the safety and security of drought-affected populations and humanitarian personnel and supplies.

AMY GOODMAN: Well, a new report by Human Rights Watch has accused all sides in the Somali conflict of committing war crimes. The report is called “'You Don't Know Who to Blame’: War Crimes in Somalia.” It calls on all sides to immediately end abuses against civilians, hold those responsible to account, and ensure access to aid and free movement of people fleeing conflict and drought. The report is highly critical of the Islamist group al-Shabab, as well as the U.S.-backed Somali Transitional Federal Government and the African Union peacekeeping forces.

Human Rights Watch is calling on the United States and other international donors to withhold financial and military aid to the Somali transitional government, unless let the government sets clear benchmarks for respect of international humanitarian and human rights law.

To talk more about the situation in Somalia and the findings of the recent report, we’re joined by Rona Peligal, the deputy director of the Africa Division for Human Rights Watch.

AMY GOODMAN: So, lay out your findings. We are continually hearing that al-Shabab is to blame for what is happening in Somalia.

RONA PELIGAL: Mm-hmm. Well, al-Shabab does deserve a good bit of the blame, because it has horrific human rights practices and controls a good part of Somalia, but one of the stories that’s not been told are the abuses that have been committed by the Transitional Federal Government and the AMISOM troops in Somalia, which have returned fire when al-Shabab has fired on crowds, and also committed indiscriminate attacks against civilians, has arbitrarily arrested and detained people, restricted freedom of expression and the like. And this has also—this has also antagonized the civilian population.

AMY GOODMAN: Talk about who the federal government is in Somalia, who these troops are.

RONA PELIGAL: Mm-hmm. Well, there is a small federal government in Somalia that’s meant to be a transitional government, that will be in power for another year while there is this roadmap process taking place, though that federal government, which controls only Mogadishu, and not even all of Mogadishu, is supported by African Union troops, a mission in Somalia, and that is supported by Ethiopia and by the international community, including the United States.

AMY GOODMAN: How did Somalia get to this point?

RONA PELIGAL: Well, it’s a very complicated situation. It’s a 20-year conflict at this point. There has been a rampant lack of accountability for the kinds of abuses that we have documented here. And those abuses have continued. What’s interesting about the famine now is that it’s calling—it’s focusing attention on Somalia that it has, in some ways, eluded for several years.

AMY GOODMAN: Talk about what is happening with the World Food Programme, the food that we have heard about, the WFP-marked sacks of food that are being sold in the marketplace.

RONA PELIGAL: Mm-hmm. Well, we haven’t tracked that particular incident, but we do know that humanitarian aid has been imperiled throughout Somalia. And this has certainly exacerbated the crisis. We know that al-Shabab, for example, has prevented people from growing food. It has pilfered livestock. It has exacted very high taxes. And it has really undermined food security in the area. This has compounded the refugee crisis that we see and exacerbated the famine conditions that we see.

AMY GOODMAN: The humanitarian impact of the conflict?

RONA PELIGAL: Mm-hmm. Well, it’s been very grave. I mean, there are 400,000 people in the Dadaab refugee camp alone in northern Kenya. This is where Human Rights Watch did our research. We returned to the camp numerous times to talk to Somalis who were fleeing the conflict in Somalia, to find out why did they flee and what did they experience. And the abuses have been horrific on all sides.

AMY GOODMAN: Last month, we spoke to Jeremy Scahill, independent journalist, Democracy Now! correspondent, who had just returned from Somalia. He discussed his research in Somalia revealing a secret CIA facility being used for counterterrorism, as well as an underground prison in the Somali capital of Mogadishu.

JEREMY SCAHILL: When we arrived in Mogadishu, within days, we discovered that the CIA had just finished construction of a pretty massive compound at the Aden Adde International Airport in Mogadishu. And the compound, which is not even hidden in plain sight—it’s just in plain sight—looks like a gated community. It has about a dozen buildings inside of it, brand new. It’s a walled compound with guard posts at all of its—at each of its four corners. It’s right on the banks of the Indian Ocean. And then next to it there are six or eight small hangars. And the CIA also has its own aircraft there.

I was able to track down a senior Somali intelligence official and began the process of investigating this facility. And what I discovered is that the CIA is training what was described to me as an indigenous strike force, members of Somalia’s National Security Agency, its intelligence division, to conduct operations in the areas controlled by the Shabab in Mogadishu. And, you know, the situation is very fluid, but the Shabab control a huge portion of Mogadishu. And the internationally recognized government controls about 30 square miles of territory. When I asked a very prominent businessman who works in the port of Mogadishu who controls the rest, he said the Shabab government, and referred to it as such.

AMY GOODMAN: That was Jeremy Scahill, whose piece in The Nation was just confirmed by the New York Times. Rona Peligal, what kind of effect does the CIA presence have on the crisis in Somalia?

RONA PELIGAL: Well, we had done research on the same thing as Mr. Scahill had done, three years ago, putting out a report about how Kenya had rendered people, Somalis, from the Somalia border back to Ethiopia, where they—and then Somalia, where they remained in detention and were interrogated by the CIA. We haven’t done more recent research on that, but we know that the abuses that the people—that those detained suffered were horrific and included torture.

AMY GOODMAN: Keep going on the humanitarian crisis in Somalia.

RONA PELIGAL: Right, and so, you had asked about the humanitarian crisis, and I wanted to add that al-Shabab doesn’t actually allow very many international humanitarian actors, and that had also similarly compounded the crisis. There are only a few humanitarian groups that can gain access to al-Shabab-controlled areas.

AMY GOODMAN: The recommendations that Human Rights Watch makes in this case? I mean, we’re talking about a dire situation.

RONA PELIGAL: Mm-hmm, and the recommendations are merely addressed at, first of all, a call to end the violence by all parties to the conflict, a call for accountability, including by the TFG and the AMISOM troops supporting it, to ensure that those who commit abuses, like extrajudicial killings or indiscriminate fire and shellings and killings of civilians, are held to account. We’re also calling for immediate access to humanitarian aid and for permission to allow Somalis to flee to safe haven in other neighboring countries.

AMY GOODMAN: In the United States, what specifically—and when you talk about the U.S. support for the TFG, for the transitional government, forces that are there, what should the U.S. do? Withdraw support for these forces?

RONA PELIGAL: And al-Shabab, of course, as well, yeah.

AMY GOODMAN: I want to thank you very much, Rona Peligal, deputy director of the Africa Division for Human Rights Watch, for joining us. 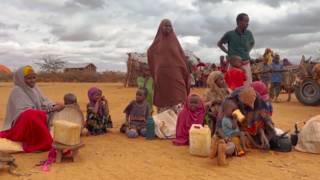