Mazhar Abbas, the deputy director of one of the stations, ARY One World television, joins us in New York. He is also the secretary-general of the Pakistan Federal Union of Journalists. He has been a well-known champion of press freedom over the past 27 years. [includes rush transcript]

AMY GOODMAN: As we continue on the issue of Pakistan, the first high-level visit for a U.S. official to Pakistan since General Musharraf declared emergency in early November took place Saturday. Deputy Secretary of State John Negroponte urged the General to lift emergency rule, welcomed his announcement he would hold elections in January. But Musharraf refused to say when he would lift the state of emergency. Negroponte also emphasized the importance of, quote, “reconciliation between the moderate political forces.”

This is an excerpt of Negroponte addressing a news conference at the U.S. embassy in Islamabad Saturday.

JOHN NEGROPONTE: Reconciliation between the moderate political forces is a very desirable thing and could help set the conditions for a successful election. And now, in recent days and weeks, the situation appears to have polarized somewhat. And that, of course, has had the effect of throwing the political process off track. But if steps were taken by both sides to move back towards the kinds of reconciliation discussions that they had been having previously, we think that that would be very positive and could help improve the political environment and pull the political actors back from the atmosphere of brinksmanship and confrontation that appears to have existed in recent weeks.

AMY GOODMAN: Deputy Secretary of State John Negroponte. Opposition leader and former prime minister Benazir Bhutto was released from house arrest in advance of Negroponte’s visit to Pakistan. As she left her home in Lahore on Saturday, she told reporters at the airport she would continue her political struggle.

BENAZIR BHUTTO: [translated] Pakistan Peoples Party has its own viewpoint. Our agenda is purely Pakistani. And every country in the world has its own agenda. We want restoration of democracy in our country. We say that chief of army staff and President Pervez Musharraf should go. If the press is under siege and judiciary is confined, then the Pakistan Peoples Party’s viewpoint is that democracy cannot be achieved without fair elections.

AMY GOODMAN: Former Prime Minister Bhutto’s statements came in the wake of a controversial decision by General Musharraf to shut down two of Pakistan’s biggest television news channels, private ones. Geo TV and ARY One World TV were ordered Friday to halt transmissions from their base in the United Arab Emirates. The continuing clampdown on the media has met with widespread protest.

PROTESTER 1: [translated] The way the transmission of Geo TV and ARY TV were stopped last night, it has exposed the ugly face under the cover of which the government wants to snatch people’s freedoms. We understand that it is not only a measure against freedom of the press, but equivalent to economic murder of certain people.

PROTESTER 2: Our demand, very plain and simple, we want total and complete freedom. We do not want to work under any code of conducts, under any ordinances.

AMY GOODMAN: Mazhar Abbas is the deputy director of ARY One World. He’s also the secretary-general of the Pakistan Federal Union of Journalists, leading opponent of Musharraf’s attempts to silence the press, and has been a well-known champion of press freedom over the last 27 years. He joins us in the studio today. He is going to be honored by the New York-based Committee to Protect Journalists tomorrow night.

AMY GOODMAN: It’s great to have you with us.

AMY GOODMAN: Let’s start off by the crackdown on your own network, on ARY and Geo. What’s happened?

MAZHAR ABBAS: The latest, which I just got news from my colleagues in Pakistan, is that some kind of an agreement has been reached, and most probably both the channels will be on air shortly. And the UAE government has also played a role in the —

MAZHAR ABBAS: Yeah, yeah, yeah. The news which I have — I have not confirmed it from my director, but the news I have from Pakistan just now is that ARY is on air now, and Geo will shortly be on air.

AMY GOODMAN: ARY is your network?

MAZHAR ABBAS: Yeah, yeah. This is what —- I mean, I have not seen it for myself, but the news I got from Pakistan just now is that ARY is on air and Geo will shortly be on air soon. And they have negotiated with the –— with both the UAE officials as well as with the Pakistani officials. But none of these two channels have signed the code of conduct or given any kind of an undertaking in writing to the Pakistani officials.

AMY GOODMAN: I wanted to ask you about why the press is such a threat to the General, to Musharraf. In May, you were one of three journalists who received a bullet in an envelope that was taped to your car when you came out of the Karachi Press Club. You’re on a hit list, of who?

MAZHAR ABBAS: I don’t know. I mean, this is exactly what we have been demanding. I mean, the investigation, proper investigation, who actually did this. We obviously have not —- we have simply filed an FIR, with the police, and we have been demanding from the government to investigate, because we are not the ones who can say that who could be. It’s up to the government to find out, to investigate about these cases. But as far as your first part of your question concerns -—

AMY GOODMAN: Let me ask something.

AMY GOODMAN: What is the Mohajir Rabita Council?

MAZHAR ABBAS: It’s basically this —- it’s a struggle for the rights of the Mohajists, you know. And some people said that it’s one of the wing of the Muttahida Qaumi Movement, the MQM. Although -—

AMY GOODMAN: Which is allied with Musharraf?

MAZHAR ABBAS: Yeah, yeah, which is an ally with Musharraf. But MQM after issuing — when this incident took place, MQM completely disowned this, and they themselves issued a strong statement against this incident.

AMY GOODMAN: You’ve also been charged with the protesting of other independent networks, when you were back in Pakistan.

MAZHAR ABBAS: Yeah. I mean, we have been struggling for this. I mean, I was really surprised when this action took place, after the promulgation of emergency. It’s not only the — why they, how they blocked about 45 news channels. But they issued two ordinances, one for the print media and the other for the electronic media.

One for the electronic media is that they amended Pakistan Electronic Media Regulatory Authority, which regulates the TV channels. The other one is a registration of printing and publication ordinance, which relates to the print media. They only issued one so-called notice to one of the newspapers to change their editorial policy. But as far as the channels are concerned, all the new channels were off air for about ten to 15 days, and they were only allowed when they signed some of a code of conduct, except the Dawn TV news channels and Aaj TV news channel. They were on air without signing any code.

AMY GOODMAN: Did your network, did ARY, sign this code of conduct?

AMY GOODMAN: What has been the press relationship with Musharraf? How have they dealt with him?

MAZHAR ABBAS: I mean, before — I think the situation got bad after 9th of March, when the lawyers movement emerged and the kind of coverage the former chief justice got from the media. I mean, they were very annoyed about the live coverage of the chief justice for about 26 hours, live coverage of some of the TV channels, and the kind of speeches he was making. So they were really annoyed. And even President Musharraf himself, in his speech on the 3rd of November, did mention why he was annoyed with the media. But, I mean, I was surprised, because that’s the only point the president has, you know, in which he can take the credit for giving so much freedom to the electronic media. And when the government was completing its tenure, they withdraw all this credit, they withdraw all this liberty to the media, which was really surprising. And secondly, they themselves violated their own laws under which a channel can be put off air. There’s a law defined in their own laws. You know, there are clauses in which it’s said that you can’t do this without issuing a so-called notice and without giving reasons in writing, you know, that these are the reasons why we are taking action against certain channels.

AMY GOODMAN: The images of the journalists being beaten in the streets, is this new?

MAZHAR ABBAS: Yeah, yeah. It’s the worst, because during that period, journalists were convicted by the military courts. Three of them were flogged, and just because they were raising voice against the ban on a newspaper, on the opposition newspaper. But during the last five years, there have not been so many actions against the press, against the media. But the incidents of violence have increased. Some 24 journalists have been killed during the last seven years. Some hundred cases of violence against journalists have been reported. Even the families of the journalists were targeted. I mean, recently, a few days back, one of the journalists who was killed, Hayat Ullah, Hayat Ullah Khan, in the tribal areas in Wana, his wife was killed about two days back.

AMY GOODMAN: Are you concerned for your own safety when you return now?

AMY GOODMAN: We’re going to leave it there. I want to thank you very much for being with us. Mazhar Abbas is the deputy director of ARY One World Television, that has just been shut down. But he says, according to his latest news, is it’s going to reopen. He will be awarded by the Committee to Protect Journalists on Tuesday night. 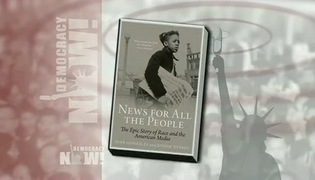 “News for All the People”: Juan González & Joseph Torres on the Epic Story of Race & the U.S. Media