“With little scrutiny from Democrats in Congress and nary a whimper of protest from the liberal establishment, the United States will soon establish permanent military bases in sub-Saharan Africa,” write Glover and Lee in The Nation. “An alarming step forward in the militarization of the African continent, the US Africa Command (Africom) will oversee all US military and security interests throughout the region, excluding Egypt.” [includes rush transcript]

AMY GOODMAN: West African military chiefs added their voices Tuesday to a growing number of critics of a new U.S. military command called AFRICOM. AFRICOM was established by the Pentagon in October and covers every country in Africa, except Egypt. It’s expected to be fully operational within a year.

AFRICOM officials claim the project will strengthen humanitarian and peacekeeping operations and is not about building more U.S. bases. But critics say it’s a move to secure U.S. access to natural resources and counter the growing Chinese presence across Africa. African nations supply the U.S. with more than 24 percent of its oil, this according to the U.S. Energy Information Administration.

AMY GOODMAN: Welcome, both, to Democracy Now! I want to also congratulate —

AMY GOODMAN: — you for 30 years of TransAfrica, what you were celebrating last night here in Washington.

DANNY GLOVER: Well, certainly, TransAfrica has been on the cutting edge of a number of issues. As we look back on TransAfrica’s issues, the issues that TransAfrica has put forth, whether it’s the fight against apartheid, the fight to restore democracy to Haiti, and also the battle that TransAfrica waged around the AGOA, Africa Growth and Opportunity Act, which we understand and feel were some of the right decisions to oppose that act.

Certainly, we oppose the strategic military presence of the U.S. government in Africa. We see what is happening in Somalia right now, where a U.S. surrogate, Ethiopia, has played a large role in disrupting and certainly destabilizing that country, and further, rather, you know. And so, we’re very concerned about that. It’s very telling that a number of countries have voiced on the continent — at least more than 11 countries on the continent have voiced their concern and their opposition to this military presence and U.S. presence in the region. There are issues, certainly, in the Horn of Africa. There’s issues in the Gulf of Guinea, as well. And certainly AFRICOM is not a new brainchild; it’s something that’s been in the works for some time.

AMY GOODMAN: Nicole Lee, can you explain exactly what AFRICOM is?

NICOLE LEE: Well, it’s difficult to give the exact definition of AFRICOM, mostly because the State Department and the Defense Department have made AFRICOM a moving target. When the Bush administration first announced AFRICOM, they suggested that there would be a military presence, military bases, and that it would cover all countries, except Egypt, and it would be in addition to our presence in Djibouti. As criticism mounted, the Pentagon then said, no, actually this will be floating bases.

But what is very clear about AFRICOM is there is certainly a move to find a home for the base and that there will be both technical advisers and the ability to bring U.S. troops on the ground to Africa. This is something that concerns many, many African nations, and overwhelmingly they have spoken up and said even the creation of such a mechanism is extremely dangerous, given the historical realities Africa still deals with, in terms of U.S. militarism in the past on the continent of Africa.

AMY GOODMAN: What are the countries being promised?

NICOLE LEE: Well, the countries that have been interested in hosting — and there’s been very, very few — certainly aid is involved. The State Department is very much involved in the creation of AFRICOM. Interestingly, this is one of the first times that the State and the Defense Department have worked so closely together, and it’s sort of a hybrid departmental initiative, where you have General Kip Ward, who is the head of AFRICOM, but the associate head of AFRICOM, if you will, is a State Department official. And so, you have a situation where aid to Africa is being uniquely tied to militarization, and this is extremely dangerous. We know that many countries in Africa need aid for HIV/AIDS medication, for debt relief — I mean, this is a reality. Yet, having the State Department tied so closely to AFRICOM is concerning many countries who truly believe that self-determination must be a priority for U.S. policy towards the continent.

AMY GOODMAN: Danny Glover, what kind of response do you get from the Bush administration, from the State Department, when you raise these issues, and also when you work with African leaders?

AMY GOODMAN: And, Nicole Lee, as head of a grassroots activist group, TransAfrica Forum, how are you mobilizing people in this country to deal with the issue of U.S. troops on African soil?

NICOLE LEE: Well, the first thing we must do, Amy, and that we are working very hard with our allies to do is to educate both other grassroots organizations and the American people about the reality of AFRICOM. Many, many people are working hard to stop the war in Iraq, and those same constituents must also be concerned with AFRICOM. AFRICOM is just another manifestation of the U.S. imperialistic moves in that region. Clearly, a base and a military presence in Africa, either in the Horn or in West Africa, threatens the sovereignty, threatens war in that entire region, in that entire hemisphere. And so, antiwar activists and Africa advocates must be very, very concerned with this new initiative.

Many people are saying, “Well, the train has left the station. AFRICOM is going to be established.” We still must fight. We still must fight to ensure that the Bush administration and Congress knows that this is not the priority of the American people. Any interest, any attention given to Africa is not necessarily good attention. And this is a perfect example of attention that is not good for Africa. Africa needs its sovereignty. Each country needs its sovereignty respected. Aid is necessary. Debt relief is necessary. But this is not a way in which we can ensure that democracy will continue in countries on the continent of Africa. So certainly education, and then also, making this a part of our call to stop the war in Iraq, to stop the wars in Afghanistan and ensure that our country stands down from this militaristic policy.

DANNY GLOVER: One of the things that I think that has to be very clear, that this initiative has received broad support from both parties. You know, it’s not just the Republican administration. What our further concern is that even though it may be placed into existence within the next year and fully operational in the next year, what are the implications after that, when we have perhaps maybe another administration? And where does this go?

So I think sometimes we draw these distinctions between what the Republicans do and what the Democrats do, but there’s a clear pattern, in terms of policy and foreign policy and military policy, that goes across both party lines. So I think it’s important for us to stand up, as we talk about this now, and the Bush administration being the initiators of this, but this idea is an idea that’s been — as I said before, been in the making for some time, and its actualization comes at this particular point, but it has a life after that. What do we do now at this particular point, knowing that we have been on the other side of this decision long before its action?

AMY GOODMAN: What role, Danny Glover, does oil play in this story?

DANNY GLOVER: Well, obviously, oil plays a major — if we say that 24 percent of the oil from the U.S. comes from Africa, then it plays a major role in this. But other raw materials, other extracted materials play a role, as well. We see, on the other hand, China, which is the largest producer of commodities in the world and in need of oil and resources for their own expansionism, there is a [inaudible] conflict.

What the U.S. brings to the table is its military prowess. It has the most powerful army in the world. It can exercise its own specific policy through military action. And that military action, as we’ve seen in the war in Afghanistan and the war in Iraq and other proposed war, has been a threat, is used as a threat, being a technique, a mechanism to keep people in line, to keep nations in line. So the very presence of that is a threat to democracy, sovereignty and independence on the continent itself.

AMY GOODMAN: And the level of activism on the ground in Africa?

We have SADC, the Southern African Development Community, came together, and the defense minister said that no country in SADC will allow an Africa Command to be built on its soil. We have a country like Nigeria, that is holding up much of the peacekeeping in Darfur, that has been asking for assistance with more troops and aid. They are saying no to AFRICOM, because they realize that attention then will shift from the peacekeeping force and from a multilateral peacekeeping force to one of unilateralism. And so, countries who truly, truly have a lot to lose know that they have much more to lose with an Africa Command and are speaking out.

AMY GOODMAN: Well, I want to thank you both for joining us on this 30th anniversary of TransAfrica. And on another note, Danny Glover, you’re now playing a sort of crooked Republican consultant on the TV dramatic series Brothers and Sisters?

DANNY GLOVER: It’s only a role. I am. In fact, I’m going to do specifically eight episodes of Brothers and Sisters for ABC. And it seems to be a very popular show. It certainly is a wonderful cast that’s there, which I’m enjoying. And just don’t have my audience believe that the real Danny Glover is coming out through this character. I mean, I’ve had that problem once before in some of my films.

AMY GOODMAN: Well, I thank you very much, both, for joining us, Danny Glover, actor, activist and chair of TransAfrica Forum; and Nicole Lee, the new executive director of TransAfrica.

As Blackwater Is Implicated in Another Deadly Shooting in Iraq, Rep. Jan Schakowsky (D-IL) Urges Passage of the Stop Outsourcing Security (SOS) Act 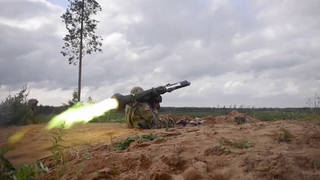