Child Labor: The Hidden Ingredient to the Billion-Dollar Chocolate Industry?

On Valentine’s Day, chocolate is the currency in which people are supposed to trade their love. Little do they know that chocolate might have been made with slave labor. We speak with Brian Campbell, an attorney with the International Labor Rights Fund. [includes rush transcript]

StoryApr 18, 2016Is the Seafood You Eat Caught by Slaves? Meet the Pulitzer Winners Who Broke Open a Global Scandal

AMY GOODMAN: Later in the show, we’ll continue to talk about the issue of diamonds, but in this Valentine’s Day special, we also want to talk about this holiday of chocolate. Lots of chocolate. Milk chocolate, dark chocolate, caramel-filled chocolate, chocolate hearts, chocolate kisses. Valentine’s Day, chocolate is the currency in which people are supposed to trade their love. Little do they know that chocolate might have been made with slave labor. Over 40 percent of the world’s cocoa, the primary ingredient in chocolate, comes from the West African nation of the Ivory Coast. The State Department estimates over 100,000 children in the Ivory Coast’s cocoa industry work under the, quote, “worst forms of child labor.”

Some 10,000 children are victims of human trafficking or enslavement. These child workers labor for long, punishing hours, using dangerous tools, facing frequent exposure to dangerous pesticides as they travel great distances in the grueling heat. Those who labor as slaves must also suffer frequent beatings and other cruel treatment. While the Ivory Coast supplies more of the world’s cocoa beans than anywhere else, Americans, for their part, are some of the world’s biggest buyers, spending some $13 billion a year on chocolate. And U.S. chocolate manufacturers continue to purchase and reap profits from child labor.

Brian Campbell is an attorney with the International Labor Rights Fund. He joins us from Washington now. We did invite a representative from the Chocolate Manufacturers Association to join us, but they declined our Valentine’s Day invitation. Brian Campbell, lay out the chocolate landscape.

BRIAN CAMPBELL: Well, in Cote d’Ivoire, as you mentioned before, there is estimated between 100,000 and 200,000 children working in the worst forms of child labor. Of those 100,000 to 200,000, 15,000 are estimated to be working as forced laborers who have been trafficked into Cote d’Ivoire in order to produce cocoa for export. The cocoa companies, the primary cocoa companies that export from Cote d’Ivoire are Archer Daniels Midland Company, the Cargill Corporation and Nestle Corporation. These companies continue, despite an ongoing civil war and civil conflict in Cote d’Ivoire, they continue to go up country into the cocoa regions to purchase cocoa from the farmers and to then process the cocoa and export it to the European and American market.

AMY GOODMAN: You are suing Cargill?

BRIAN CAMPBELL: The International Labor Rights Fund in 2005, when it became apparent that they were going to miss their deadline that they had set for themselves with agreement under the Harkin-Engel Protocol, the International Labor Rights Fund filed suit on behalf of three children, in particular, but also on behalf of a class of children alleging that the companies have aided and abetted and provided logistical support that has led to the use of trafficked child labor and forced child labor in Cote d’Ivoire.

The law that we sue under is the Alien Torts Claim Act, the Torture Victims Protection Act here in the United States, but also we have claims under state law, which is a contract claim that essentially says that the corporate codes of conduct that the companies have integrated into their contracts with their suppliers create a binding responsibility on behalf of the companies to ensure that forced child labor is not used in the production of cocoa.

AMY GOODMAN: And just to be clear, the Harkin-Engel Protocol, you’re talking about Senator Harkin and Congressmember Engel; what do they have to do with this?

BRIAN CAMPBELL: In 2000 and 2001, there were a series of reports done by the BBC and Knight Ridder, which really exposed the severity of the problem in West Africa. And so, in 2001, Senator Harkin and Representative Engel called together industry representatives, labor unions and civil society to engage in a — to agree to a protocol which would set standards and require the companies to monitor and certify that their cocoa is not being made by forced child labor or in the worst forms of child labor by 2005.

The protocol was a step that occurred after there was a threat of legislation that was going to require the companies to certify through labeling that imports of cocoa were produced — were not produced with forced child labor. The companies, fearing that the label would require them to actually integrate in a much quicker way monitoring its certification program, managed to negotiate an alternate settlement, which ended up being the Harkin-Engel Protocol.

BRIAN CAMPBELL: Well, of our three plaintiffs in the lawsuit, each one of them was living in Mali, and they had been trafficked into Cote d’Ivoire. And they were searching for a better living. And essentially they wanted to — they had heard stories about the wealth in Cote d’Ivoire and about the ability for them to earn income to send back to their parents. So after they were trafficked in with promises that they were going to receive payment and that they were going to be able to return home, the middlemen, the traffickers, sold the children to farmers in West Africa.

Well, when the children arrived on the farm, they were housed in squalor, in terrible conditions. They were housed in homes, which then they were forced to labor out in the fields every day under threat of punishment. If they tempted to escape, they could cut their feet, they would force them to drink urine and watch as the other children were forced to drink urine. They were beaten savagely, and they were all forced to live in a very small enclosed space with dozens of other children.

The children, after they became older, were eventually allowed to go, because they were no longer useful as they reached adulthood, and so they were then released, at which point on many occasions they would seek out help. There are some organizations that will rescue the children and return them back to their homes, but also provide rehabilitation.

AMY GOODMAN: Brian Campbell, can you talk about the chocolate companies themselves? I mean, you’ve got the famous companies: Hershey’s, Godiva, Mars. Talk about these corporations. What responsibility do they have? What is your assessment of them?

BRIAN CAMPBELL: Well, these corporations, of course, make huge amounts of profits: as you mentioned, the $13 billion industry of chocolate just in the United States alone. And 40 percent, slightly over 40 percent, of the chocolate comes from West Africa, as you mentioned — comes from Cote d’Ivoire. Seventy percent comes from West Africa. Well, the chocolate companies are completely dependent upon purchasing from Cote d’Ivoire, but they had set that up themselves. They had gone in there decades ago to plant the trees and create the process for which the cocoa is now being harvested.

These companies, of course, are the sole lifeblood of Cote d’Ivoire and, to a certain extent, Ghana, and so, therefore, they play a strong prominent role in public policy and also the economy of these countries. However, they have stated that they like to — they are just innocent purchasers, that they have no input into the process of growing cocoa, and that they have no input into the economy itself in Cote d’Ivoire. However, as is apparent from their prominent role, they actually play a very strong role and have a responsibility to ensure that the cocoa that they receive, the cocoa that’s being grown for them, is grown under conditions that meet both international law requirements and also that help sustain and help build a thriving community within West Africa.

At this time, the cocoa companies, seeing their role as only an innocent purchaser, have decided to remain outside of the actual community-building process, providing only small amounts of aid to help build schools or to help build other community development programs, but the aid pales in comparison to the amount of money that the receive from the goods that these farmers produce. I think over the past five years, and this on publicly available information, the companies have put back into the Cote d’Ivoirian economy through school building only $5 million. And this, over five years, while they received $13 billion each year just on the cocoa itself.

AMY GOODMAN: So, overall, you’re talking about something like a $60 billion chocolate industry. Roughly or less than 1 percent is fair trade. But can you talk about what you consider the good companies, companies that are concerned about the labor and where people can go to get chocolate that doesn’t cause pain by those that are forced to cultivate it?

BRIAN CAMPBELL: Absolutely. There are three particular chocolate companies that have done an excellent job of developing the local communities and bringing in the farmers as stakeholders, meaning that in one particular company, Divine Chocolate, which is a company based out of England, but has just now begun sales across the United States, they have entered into a partnership with Kuapa Kokoo, which is a cocoa cooperative in Ghana. And the company itself is owned by investors in England, but also I think — and I don’t have the number offhand, but I think it’s around 45 percent of the company is owned by the African farmers themselves. The cooperative is a cooperative of 20,000 farmers, who each receive a premium on top of the sale price of the cocoa, so that way they can provide each other microcredit for other types of income-earning sources, but also so they can get their children into schools and help develop the local education system.

And Equal Exchange, which is a company out of Massachusetts, is an excellent company that works with a cooperative in the Dominican Republic on the same basis, where they provide a premium. Fair trade companies are growing, and it’s good to see that they’re growing, because it’s a very important aspect of trade that trade should not just be exacting resources from other countries and exacting labor, but it should also be putting money back into those economies so that they can develop and become less dependent upon their cocoa growing.

AMY GOODMAN: I want to thank you very much, Brian Campbell, for joining us, attorney with the International Labor Rights Fund. We’ll certainly link to your site to get more information.

Global Witness Founder Charmian Gooch: “The Diamond Industry Is Failing to Live Up to Its Promises”

NEXTGlobal Witness Founder Charmian Gooch: “The Diamond Industry Is Failing to Live Up to Its Promises” 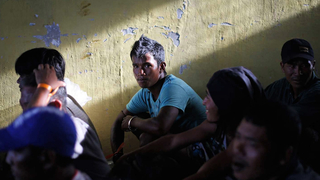 Is the Seafood You Eat Caught by Slaves? Meet the Pulitzer Winners Who Broke Open a Global Scandal