Three former Army officers and two civilians have been indicted for diverting $3.6 million in Iraq reconstruction money to a contractor in exchange for cash, luxury cars and jewelry. The announcement came one day after the House Committee on Oversight and Government Reform held a hearing about how billions of dollars set aside for the Iraq reconstruction have gone missing. CorpWatch managing editor Pratap Chatterjee attended the hearing. He joins us from Washington. [includes rush transcript]

AMY GOODMAN: As we continue on the issue of reconstruction, so-called, and private armies, we will continue with Jeremy Scahill, and we’ll also be joined by Pratap Chatterjee. Juan?

JUAN GONZALEZ: Yes. The Justice Department has indicted three former Army officers and two civilians. They are accused of diverting $3.6 million in Iraqi reconstruction money to a contractor in exchange for cash, luxury cars and jewelry. The announcement came one day after the House Committee on Oversight and Government Reform held a hearing about how billions of dollars set aside for the Iraq reconstruction have gone missing. The committee’s chair, Henry Waxman, questioned Paul Bremer, former administrator of the Coalition Provisional Authority.

REP. HENRY WAXMAN: Little more than a year, $12 billion in U.S. currency removed from the vaults of the Federal Reserve and flown into Iraq, this money, mainly $100 bills, were packed into bricks, and each brick was worth $400,000 each. And I think we have a picture of the bricks on the screen. They were assembled into large palettes containing over $60 million in cash and flown into Iraq. In December 2003, Ambassador Bremer and the Coalition Provision Authority asked for a shipment of $1.5 billion to be flown into Iraq, and a Federal Reserve official described this in an email as the largest payout of U.S. currency in U.S. history. But this didn’t remain the largest for very long, because in June, $2.4 billion was sent to Iraq, and this time the Federal Reserve official wrote, quote, “Just when you think you’ve seen it all, the CPA is ordering $2,401,600,000 in currency.”

Well, the question this committee is trying to answer is, what happened to the money? Was it spent responsibility? Was it misspent? Was it wasted? Did it go out to pay off corrupt officials? Or, worst of all, did some of this money get in the hands of the insurgents and those who are fighting us today in Iraq? Ambassador Bremer, are you concerned about the possibility that some of this money went to ghost employees — we don’t know where it went — and might be showing up in the hands of insurgents that are fighting U.S. troops?

PAUL BREMER: If there were evidence of that, I would certainly be concerned.

REP. HENRY WAXMAN: We don’t know whether there’s evidence of it, but we don’t —

REP. HENRY WAXMAN: — know whether the people who got the money were entitled to it or what they did with it.

PAUL BREMER: Well, as the inspector general pointed out, the problem of ghost employees was certainly there, and it was there even before the invasion. But I have no knowledge of monies being diverted. I would certainly be concerned if I thought they were.

REP. HENRY WAXMAN: Well, $12 billion is a lot of money. It could have been used for a lot of projects that American taxpayers ended up funding through appropriations. It seems to me inconceivable that we can’t explain what happened to it, but that seems to be the situation we’re in.

PRATAP CHATTERJEE: Amy, this is a very important hearing. This hearing yesterday was the first what Henry Waxman promises will be two years of hearings. And they’re going to be looking into corruption, waste and abuse in Iraq, and also, for example, in border surveillance. Today’s hearing, he’s going to look at the money being spent on protecting the border ostensibly. What they were talking about yesterday and what Paul Bremer was on the stand to talk about was the $19.6 billion worth of Iraq’s money that the Coalition Provisional Authority spent in Iraq and squandered, much of it.

Dennis Kucinich at one point held up a piece of paper and said, “Mr. Bremer, what happened to this $500 million, which says, 'For security, TBD,' to be determined?” And, in fact, there were no answers, partly it’s because Bremer had not been briefed, and so he didn’t recognize the piece of paper, but I think what was more telling was the fact that he said, “I never read those minutes.” There were meetings twice a week of U.S. officials, where they decided how to spend Iraq’s own oil money. And Paul Bremer, who ultimately was responsible for that, candidly admitted at the hearing yesterday that he didn’t know what happened to the money.

His assistant, David Oliver, was present. He was his budget chief. And there was a quote played back, where he was interviewed, where somebody asked him from the BBC if he knew what happened to the money, and he said, “Frankly, it’s not important.” And the interviewer said, “Billions of dollars’ worth of money, and you didn’t know where it went?” And so they said, “Well, you know, this wasn’t American money. Why should we care?” And really, there was — Paul Bremer had this sort of cocksure attitude that came across. The Democrats, unfortunately, didn’t have all their facts marshaled. They weren’t able to go after him in that sense, because they weren’t really involved in the detailed kind of questioning that Waxman has been good on so far.

JUAN GONZALEZ: And, Pratap, of course, they obviously haven’t been reading your CorpWatch, or they would know about questions to ask.

PRATAP CHATTERJEE: If they had, yes.

JUAN GONZALEZ: But I’d like to ask you also, you’ve been also tracking Halliburton consistently now for years. The reports about the Pentagon finally pulling money, because Halliburton had hired Blackwater, but hadn’t notified the government of it.

PRATAP CHATTERJEE: Juan, there was a very interesting moment, where Tina Ballard, who’s assistant secretary to the Army, said in yesterday’s hearing that they had withheld $19.6 million from Halliburton on Monday. And Waxman said, “Well, it looks like our hearing saved the government and the taxpayer $20 million, just by holding this hearing.”

The reason they withheld that money was because Halliburton had been using private security contractors in violation of their agreement with the Army, which said they would only use military security. So — and, in fact, Halliburton’s own lawyers — Waxman had a piece of paper, which showed that Halliburton’s own staff had said, “You can’t say” — I mean, the quote was, “A pig is a pig, even if it’s wearing lipstick. If we use a company that uses private security, and that’s a violation of our agreement, we’re going to lose our contract with the government.” So what the Army did yesterday was it took back $20 million, because Halliburton had acted outside its agreement.

Now, that was a small amount of money, and, in fact, much larger sums of money have been questioned by military auditors. As much as $1.5 billion have been questioned. It’s not absolutely certain this money was stolen or wasted. It’s just that this money has been questioned. And, unfortunately, the Pentagon has seen fit to give them the money, because they basically say, “It’s the fog of war. We don’t know what happened to the money. Halliburton deserves the benefit of the doubt.”

The good news now is that Halliburton’s contract has been taken away from them. It’s going to be competitively bid. My question is, who is going to get the next contract, and are they going to do a better job? It’s very possible that Halliburton will get one part of the contract to supervise the people that they were once in charge of in the first place. That’s something that we’ll discover in the future, but there promises to be many more hearings by the Government Reform Committee looking into these very specific matters of what happened to the over $20 billion that has been spent on Halliburton in Iraq.

AMY GOODMAN: Pratap Chatterjee, I want to thank you very much for being with us, managing editor of CorpWatch.org and author of Iraq, Inc.: A Profitable Occupation. Also, thanks to Jeremy Scahill, whose forthcoming book is coming out very soon, Blackwater: The Rise of the World’s Most Powerful Mercenary Army.

Cheering Movers and Art Student Spies: Was Israel Tracking the Hijackers Before the 9/11 Attacks?

NEXTCheering Movers and Art Student Spies: Was Israel Tracking the Hijackers Before the 9/11 Attacks? 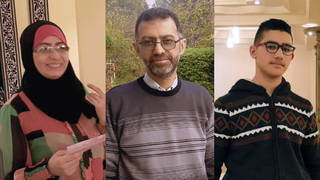