We speak with Gerardo Reyes-Chavez, a farm worker and member of the Coalition of Immokalee Workers. The coalition represents over 4,000 mostly immigrant workers who labor in the agricultural fields of Southwest Florida. The group recently waged a successful campaign against fast-food giant McDonald’s over the price paid for tomatoes picked in Florida. In 2005, the group also won a campaign against Taco Bell. [includes rush transcript]

AMY GOODMAN: Well, as we talk about immigration and labor, I also want to bring into this conversation Gerardo Reyes-Chavez. He’s a farm worker and member of the Coalition of Immokalee Workers. The coalition represents over 4,000 mostly immigrant workers who labor in the agricultural fields of Southwest Florida. The group recently waged a successful campaign against fast-food giant McDonald’s over the price paid for tomatoes picked in Florida. In 2005, the Immokalee Workers also won a campaign against Taco Bell.

Gerardo Reyes-Chavez, welcome to Democracy Now! You’re both here for this Labor Voices conference. Talk about this victory that you just won. You were on your way to McDonald’s headquarters?

GERARDO REYES-CHAVEZ: That’s right. Well, this is another big step for us in our struggle for fair food that started basically with the boycott of Taco Bell in 2001. And for us, this victory represents a big step, because, on one hand, we have the agreement with Taco Bell and Yum! Brands. The agreement was signed with the prime company of Taco Bell, and Yum! Brands is the largest corporation of fast food in the world, because it’s made by five brands, among them Pizza Hut and Kentucky Fried Chicken.

Now we have this agreement with McDonald’s. And what it represents is that we have the two biggest restaurant chains in the world with us, saying that they agree to pay more so that the farm workers have an increase of 32 cents per packet of tomatoes, that, before that, was stagnant since 1978 until now.

AMY GOODMAN: And explain how it works, because I remember certainly with the struggle with Taco Bell, they were saying we have no control over what these tomato pickers are getting paid, because we’re not the ones who pay them. It’s subcontractors. The same thing with McDonald’s? How did it work? Did you meet with them at the beginning and they refused? And then, how did the pressure build?

GERARDO REYES-CHAVEZ: It was a process that took two years, to McDonald’s. And after the victory with Taco Bell, after the agreement with them, we started to try to bring them to the table. And they were just trying to find another ways to find a solution, but without necessarily including us in that process. And we knew it was not going to work, and after two years, they realized that it was not working. So they had a seat at the table. It was because of the pressure of the people. There were many students all over the country organizing in solidarity with us. There were churches in the institutional level putting pressure publicly.

AMY GOODMAN: And how did they put pressure?

GERARDO REYES-CHAVEZ: They were just sending strong messages. For example, the NCC, the National Council of Churches, sent a message to them. People like John Sweeney from the AFL-CIO, students making protests, people from churches taking the streets —

AMY GOODMAN: How many tomato pickers are there?

GERARDO REYES-CHAVEZ: There are, I would say, around 6,000, maybe a little bit more. Every year is a little bit different.

AMY GOODMAN: And where are they originally from?

GERARDO REYES-CHAVEZ: Our community is formed by workers from Mexico, Guatemala and Haiti, mostly, and a few of other countries.

AMY GOODMAN: And who is next in your sights?

GERARDO REYES-CHAVEZ: Next in the list is Burger King, because they have said publicly that they are not going to — they are not willing to do anything to improve the lives of the farm workers who, in this case, make their profits possible.

AMY GOODMAN: How much do tomato pickers get paid?

GERARDO REYES-CHAVEZ: It’s 40 cents per packet of 32 pounds, which is — what it means is you have to pick two tons in a day in order to make only $50. That is not enough to have a decent living and sometimes not even enough to pay rent. And sometimes it is impossible to pick two tons. That is without any type of benefits or protections that exist in other industries. So we are just struggling in order to establish things that are normal. The most basic human rights are nonexistent when you are a farm worker.

AMY GOODMAN: David Bacon, we are moving up on May Day, on May 1, the anniversary of the big protest. What are the plans for May 1? Where do you see the immigrant rights movement today?

DAVID BACON: Well, I think there are going to be demonstrations in communities all around the country. You know, that’s what we saw last May Day, was not just the huge demonstrations in Los Angeles and New York, but also that they were taking place in communities where we’re not even accustomed to thinking of immigrants constituting a large part of the people there. So, personally, I’m going to be in New Jersey and Pennsylvania and little farm worker towns, you know, marching with some of the workers there.

I think that a lot of people are going to come out on May Day, because the problems that we were trying to deal with a year ago are still there. We need a legalization program in this country for the people who don’t have papers — and a real one, not some kind of phony temporary status, but one that really gives people rights and permanent residence. And at the same time, I think that people have sort of upped the ante since last year. We need to look at the fast-track authority. We need to look at the implementation of this last chapter of NAFTA and stop those from happening, because we also need to try and stop those things that are forcing people into this migrant stream so that people can choose for themselves whether to come or not.

AMY GOODMAN: Now that the Democrats are in charge, do you see them doing anything different than the Republicans?

DAVID BACON: I think there’s a debate in the Democratic Party between people who basically want this corporate program and are willing to make a deal with corporations to get it and other people like, for instance, Congresswomen Sheila Jackson-Lee in Houston, who proposed last time a real legalization program that would give people green cards, and she connected it with a jobs and employment program, which I thought was a very far-sighted kind of proposal here. And she, I think, is still advocating for that.

AMY GOODMAN: I want to thank you both very much for being with us — David Bacon, labor journalist, Gerardo Reyes-Chavez of the Coalition of Immokalee Workers, for being with us today. And we’ll continue, of course, to follow this issue. 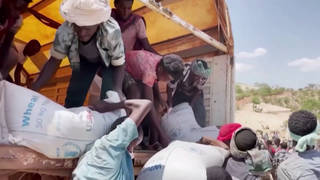