We look at the impact of the war in Ukraine on the continent of Africa with Adebayo Olukoshi, an international relations scholar based in Johannesburg, South Africa. African nations import much of their grain. With their significant dependency on Ukrainian wheat and fertilizer in the Global South, “there is a wish for much more investment in diplomacy” between Ukraine and Russia, says Olukoshi. He says many African nations have more amicable relations with Russia due to the Soviet Union’s support for anticolonial struggles before its dissolution.

As we continue to look at the war in Ukraine, we turn now to focus on how the war is impacting the continent of Africa. Joining us from Johannesburg, South Africa, is Adebayo Olukoshi. He is distinguished research professor at the Wits School of Governance in Johannesburg, previously served as director for the African Social Science Council and the U.N. African Institute for Economic Development and Planning.

We welcome you to Democracy Now!, Professor Olukoshi. If you can respond to Russia’s war in Ukraine and what you feel needs to happen, what you feel as you follow the debates around the world and look at how the U.S. covers what’s happening in Russia and Ukraine, what your frame is, how different it is?

ADEBAYO OLUKOSHI: Thank you very much.

I think, like most people around the world, the wish, the overwhelming wish, in Africa would be for the war to stop. It’s needless damage to property, destruction of lives, as well as other consequences which are felt far away from the immediate theater of war, such as issues of food security and food price inflation, which are of big concern to many countries on the continent. There is a wish for much more investment in diplomacy, a toning down of the war rhetoric on all sides, from Brussels to Moscow to Kyiv to Washington, and an opening up of all of the channels, both through the United Nations and other influential parties that might be able to bring the belligerents to a negotiation.

NERMEEN SHAIKH: Professor Olukoshi, could you speak specifically about the extent to which many countries in the Global South, including of course in Africa, are increasingly dependent, have been increasingly dependent on wheat and gas and grain supplies from Ukraine and Russia, and what the impact has been so far, that we’ve already been witnessing in many parts of the world, including where you are, in South Africa?

ADEBAYO OLUKOSHI: Well, I think with regard to those specific concerns, over a period of time, I would say the last 30 years or so, we’ve seen for most African countries a grain dependence on particularly the supply of wheat and fertilizers for agricultural activities on the continent, coming from primarily Ukraine, and in the case of fertilizer, to a great extent from Russia. The disruptions which the war created immediately, fighting started, rebounded directly on those countries in terms of shortages of bread, a severe increase — a sharp increase in the prices of all commodities connected to wheat, and also, of course, a problem with farming communities awaiting the supply of fertilizers for the farming season, in a context where for most of the continent agriculture is mainly dependent on rain, on the rainy season, and therefore, in a sense, very sensitive to any disruptions in the supply chain for fertilizers.

And you will recall that in the context of that, because, I mean, obviously there is a correlation between food and politics on the continent, as probably elsewhere around the world, but in the immediate aftermath of the outbreak of the conflict, the chair of the African Union Commission, Mr. Faki, and the chair of the Assembly of Heads of States, the Senegalese President Macky Sall, took a trip to meet with both President Zelensky and President Putin in order to make the appeal for supply lines to be reestablished, and therefore relieve most African countries of the food price pressures they were under.

NERMEEN SHAIKH: And if you could speak also about the historic role of the Soviet Union following the end the Second World War in supporting anticolonial efforts in much of the Global South, the formerly colonized world, and how that position, if you’ve seen it alter since the dissolution of the Soviet Union, and how this war is viewed in that context, the context of decolonization?

ADEBAYO OLUKOSHI: Well, thank you very much. I think this is a piece of history that is sometimes neglected by many commentators, who express shock and surprise, for example, that so many African countries abstained from the initial vote in the General Assembly or, in some cases, even outrightly voted against the resolution to condemn Russia. The truth is that in the period after the end of the Second World War, anticolonial struggles in Africa began to gather momentum, following particularly the independence of India in 1947. Russia, like China, actually, became key allies to the nationalist politicians who underwrote the African independence struggle, and doing so in a lot of cases in the face of resistance and opposition from what is today described as “the West,” broadly defined, of countries, particularly in Europe, that either wanted to slow down the independence movement or even to resist it outright, as was the case among some of the leading political figures in power in Europe, the U.K. and France particularly at the time.

And for these settler colonies on the continent, where there were armed liberation struggles, both training and equipment mostly came from China and Russia to help prosecute the armed liberation struggle against the settler colonialists. This is particularly true for southern Africa, including South Africa, where I’m located. So, a bond was built over time, and a relationship of mutual trust was developed. And even as countries began to gain their independence, although the United States, for example, did offer a lot of support by way of scholarships to students, the first generation of post-independence African students to pursue higher education in various parts of the U.S., it is also important to note that this was matched substantially by the kinds of offers of support in training for technical, vocational and advanced higher education by Russia, to a lesser extent China, and in the case of Russia, even establishing a particular university, the so-called — what was called the Friendship University, Patrice Lumumba Friendship University, that also, I think, struck a chord with many Africans.

I’ll add here, just because of contemporary interests, that part of the broad range of cooperation between newly independent African countries and Russia within the framework of the Soviet Union as it existed at the time also included military training, military training that may not have been on the scale of, say, Russia or USSR, India, military cooperation, but certainly in a specific number of countries, I would say that not an insignificant number of senior officers underwent their advanced training in Russia. And Russia also supplied an important part of their weaponry. So there is an affinity of a political and military nature, which goes back to the post-war period and which continues to play a role in shaping attitudes and opinion, particularly in political circles. 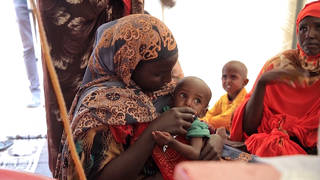