“No Gun Left Behind: The Gun Lobby’s Campaign to Push Guns into Colleges and Schools”

StoryJul 05, 2022As Uvalde Reels from School Massacre, a Look Back at Historic 1970 Chicano Walkout at Robb Elementary

AMY GOODMAN: We turn now to Washington, D.C., joined on the line by Brian Siebel, the senior attorney with the Brady Campaign to Prevent Gun Violence, author of a new report that draws attention to the gun lobby’s efforts in recent years to change college campus rules prohibiting firearms. It’s called “No Gun Left Behind: The Gun Lobby’s Campaign to Push Guns into Colleges and Schools.” Brian Siebel, welcome to Democracy Now!

BRIAN SIEBEL: Thank you for having me.

AMY GOODMAN: Talk about your findings today in this aftermath of the shootings at Virginia Tech.

BRIAN SIEBEL: Well, what we point out is, we didn’t even know who had been shot at Virginia Tech, when several gun lobby organizations put out press releases calling for students and teachers on college campuses to be armed. You know, I think they would like it to give everybody a gun and start the crossfire. I think that’s their solution to this kind of tragedy. Of course, we totally disagree with that. And the report is designed to draw attention to their campaign. It follows on the heels of another campaign that the gun lobby has been pushing, which is to force guns into workplaces. They have supported bills in a number of states to bar employers from keeping guns out of employees’ cars. We think that’s again just a kind of foot-in-the-door effort that ultimately they would like to see guns essentially everywhere in society.

AMY GOODMAN: Can you talk about the law in Virginia and everything you understand about how Cho was able to get the guns that he used?

BRIAN SIEBEL: Well, you know, it’s ironic that Virginia actually is probably the best state in the country in turning in mental health records to the instant background check system that we operate under. And yet, they did not turn in the records for people who had been adjudicated mentally defective, but not actually committed to an institution, which is the category that Cho fell into. A judge in December of 2005 had checked off a box, after an evaluation, that said he was a danger to himself and was mentally ill, and that disqualified him under the 1968 Gun Control Act, and that record should have been in the background check system that, when he went to a gun store and tried to purchase the two handguns that he bought, should have turned him up as a person that would be denied.

Now, of course, the unfortunate fact is that even had he been denied, he then could have gone down to a gun show in Virginia and bought a gun from a private seller without any questions being asked, with no background check being completed. So that really is kind of a huge loophole in our — one of the huge loopholes in our country’s laws, is that we don’t have universal, thorough background checks whenever anyone tries to buy a gun. And I think we certainly need to get to that point if we want to begin to prevent people like Cho from buying guns in this country.

AMY GOODMAN: Now, Virginia has passed a new law, haven’t they? But the gun shows are the loophole, even since the Virginia Tech shooting.

BRIAN SIEBEL: Yes. The gun show is a significant loophole in Virginia and in most states, actually. There are about 19 states that have some form of universal background check, and that’s the kind of system — like California, for example, if you are a private seller, you want to sell a gun to someone else, you have to go back to a dealership, the gun has to — the dealer then runs a check for a small fee, the dealer keeps the record of the sale, and, you know, the system is designed to prevent transfers to people who would otherwise fail a background check.

And the background check actually has been immensely successful. There are about more than 1,300,000 people who have been denied at gun dealerships from being able to buy a gun. And immediately after that law was passed in the early '90s until recently, gun crime came down, almost every — basically every year. Unfortunately, in the last couple years, we've seen a sharp uptick in gun violence. But the law had been very effective.

The problem is it needs to be made more comprehensive, so that anyone who has a felony record, who has been adjudicated mentally defective like Cho, would actually be denied a sale, not only at a gun store, but in private transactions, as well. Now, I mean, of course, the problem with the mental health records is that very few states even — a lot of states don’t even put any records in their system. It’s ironic, as I said, Virginia had among probably the best system, and yet, even there, Cho fell through the cracks.

AMY GOODMAN: We’re talking to Brian Siebel, senior attorney with the Brady Campaign to Prevent Gun Violence. They have just put out a report, “No Gun Left Behind: The Gun Lobby’s Campaign to Push Guns into Colleges and Schools.” Talk more about the gun lobby effort in the schools and what you have found that’s new in this report.

BRIAN SIEBEL: Well, one of the things we published is, the NRA put out a letter in Maine, the state of Maine. Actually, the colleges there have policies against guns on campus, but there is some lack of clarity in the law, and so the institutions were seeking a law essentially supporting their position that they can control guns on campus. The NRA put out a letter opposing this, claiming that under a preemption law in Maine that the college already had no right to bar guns from campus.

And then, the other day, after the shooting, Wayne LaPierre wrote an editorial in the USA Today, where he calls — says every option should be put on the table to protect our children at school, which, to us, in light of this letter, suggests that the NRA is supporting prohibiting colleges and universities from barring guns on campus.

The NRA supported a law in Utah. It’s actually the only law of its kind in the country at this point that prohibits universities and colleges in Utah from controlling firearms on campus. And so, we believe that they have essentially made it clear that that’s the direction they would like this country to go in, that colleges and schools would be prohibited from barring guns, and therefore anyone who could otherwise possess a firearm would be able to do so on campus. To us, that’s a recipe for disaster.

AMY GOODMAN: Can you talk about gun-filled zones?

BRIAN SIEBEL: Well, I mean, again, their notion here that this is a — to us, a multi-step campaign. You know, about 20 years ago in the state of Florida, they pushed for expanding concealed carry laws to make it — to take the discretion out of law enforcement from being able to prohibit people from carrying guns around. They have continued to push that now with a campaign to force guns into workplaces, and now they would like to essentially arm students and teachers. And if college students can be armed, then, you know, I think in their eyes certainly workers could be armed.

And I think that the overall campaign is to prohibit anyone from being able to set rules that prohibit guns from being on their premises, whether it’s workplaces or colleges and schools. And one of the things we talk about in the report is all the reasons why that would be a terrible idea. Drugs and alcohol are prevalent, unfortunately, on college campuses. The risk of suicide is very real. It would increase the risk of gun theft, and so forth. So there’s a host of reasons why this would be a rather dangerous idea, and it would certainly increase the risk to students.

AMY GOODMAN: Brian Siebel, I want to thank you for being with us, senior attorney with the Brady Campaign to Prevent Gun Violence. We will link to your report, “No Gun Left Behind: The Gun Lobby’s Campaign to Push Guns into Colleges and Schools.” 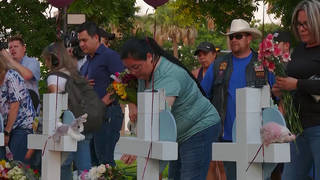 As Uvalde Reels from School Massacre, a Look Back at Historic 1970 Chicano Walkout at Robb Elementary