“Another World is Possible, Another U.S. is Necessary”: Thousands of Activists Gather in Atlanta for the First-Ever U.S. Social Forum

Inspired by previous World Social Forums in Brazil, India and Kenya, over 10,000 grassroots activists have gathered in Atlanta this week for the first United States Social Forum. We begin our Atlanta coverage with Alice Lovelace, the national lead staff organizer for the U.S. Social Forum. [includes rush transcript]

JUAN GONZALEZ: Over 10,000 grassroots activists have gathered in Atlanta this week for the first United States Social Forum. The theme of the five-day event has been “Another World is Possible. Another U.S. is Necessary.” The gathering has been inspired by previous World Social Forums in Brazil, India and Kenya.

We begin our coverage in Atlanta with Alice Lovelace, the national staffer organizer for the U.S. Social Forum. She’s an Atlanta-based poet and civil rights activist.

AMY GOODMAN: Welcome to Democracy Now!, Alice. It’s good to have you with us.

AMY GOODMAN: Describe what the Social Forum is. Why now the first time in the United States?

ALICE LOVELACE: Well, it took a little while to bring it to the United States, because there was a lot of educating that had to be done. People in the United States were not familiar with the Social Forum format, a session where actually there is no agenda, except for the agenda that the people who come bring with them. And that was a little different. The Social Forum is a massive gathering. It’s almost like a big networking meeting. People come to talk about the campaigns they’re undertaking, talk about the situations in their cities around the issues, and to share and to learn from each other, which is the most critical part, and then, something that we’re doing that is different from the other Social Forums, actually sitting together and figuring out strategies for how we move our vision for another world forward.

AMY GOODMAN: How did the Social Forums get started to begin with — I mean , beginning in Brazil?

ALICE LOVELACE: Well, actually they preceded Brazil. The Social Forum process actually started around some of the United Nations gatherings. One of the most important ones, of course, was the conference on race, which was in Durban, South Africa, and people there were being brought together by these United Nations meetings, but they found them to not be serving their needs, so people would gather offsite and talk about the things that they really wanted to talk about. So what happened in Brazil was this realization that they didn’t have to wait for someone else to convene them to have these conversations, that they actually could convene themselves and build their own agenda. And that’s what made Brazil and Porto Alegre so important, that it became that independent process of the gathering of civil society to talk about the world they wanted to see.

JUAN GONZALEZ: And once people gather there, how then do they conduct the business of the forum?

ALICE LOVELACE: Well, the Social Forum process — when you register, organizations have a possibility of submitting proposals for presenting programs at the Social Forum. At our Social Forum there will be 950 sessions that were submitted by those people attending. There will be another 200 to 300 that will actually be organized on the spot, what we call “open spaces,” so that the agenda is built by the people who come. People also find it’s very useful for networking, coming together across and around issues, and building new coalitions.

AMY GOODMAN: I also want to bring into the conversation a veteran of other World Social Forums, the South African poet Dennis Brutus. Dennis was imprisoned along with Nelson Mandela on Robben Island for his participation in the anti-apartheid struggle. He’s the author of many books, including Poetry & Protest, a collection of his writings. Welcome, Dennis Brutus, to Democracy Now!

DENNIS BRUTUS: Thank you. Good to be here.

AMY GOODMAN: Talk about this Social Forum that’s taking place in Atlanta in comparison with the other Social Forums and why you felt the need to be one of the organizers to make this one in the United States happen.

DENNIS BRUTUS: Well, I found Atlanta — and I only got here yesterday — very impressive. I like the participation of women, the trade unions, the kind of cultural activity. So it seems to me it’s bringing an additional energy. I’ve been in Brazil, Porto Alegre, and in India, Mumbai, and Nairobi earlier this year. We’ve had World Social Forums in different places. Each one, I think, builds on the movement, and it’s a movement of civil society. It’s people from the grassroots pushing for change. The slogan “Another World is Possible” means we reject the kind of globalizing process that is today run by the corporations. We’re talking of grassroots globalization. I think, for me, Atlanta is a very pleasant kind of forward movement from the earlier movements.

JUAN GONZALEZ: And, Dennis Brutus, the importance of having this Social Forum here in the United States, given the fact that, I guess, many people around the world would say that the vast majority of the American people are out of step with what is going on in the world?

DENNIS BRUTUS: Well, I guess I would have to agree in some sense. Certainly, for many people outside in other countries, they’ll talk of the United States as the “belly of the beast.” It’s where the oppressive process begins. But that’s only half the story, because there are so many people in the United States, activists, people in the churches, trade unions, community organizations. There is a different thrust. That thrust is for social justice, of course, in the United States, but also social justice in the other countries, which are part of this global process of repression: The rich get richer, the poor get poorer. We’re challenging that.

And I think we are actually making quite significant progress. I think all over the world the rejection of the corporate globalizing process is developing. And we see it in countries like Venezuela, for instance, other parts of the world, particularly, I think, South America. I wish I could say it’s also true of Africa. We’re being kind of slow in Africa right now, but I think we’re building in the same direction a different world, a more just world, a more humane world.

JUAN GONZALEZ: In your mention of Africa, we, in the headlines, mentioned that Bishop Desmond Tutu raised some particularly sharp criticisms of the ANC in recent days. Your reaction to that?

DENNIS BRUTUS: Oh, I’m delighted, because it’s also what I’m saying, and I think we’re allies. We’re old friends, of course, as well. But the time is growing in South Africa where people, having achieved some degree of democracy, the post-apartheid era, we’re saying the people who made the promises are not delivering on those promises. And so, we’re into a new phase, and, I agree entirely with Desmond Tutu, we have to move forward and we ought to demand: Either you deliver or you’re going to have to change.

AMY GOODMAN: His quote exactly: “I’m really very surprised by the remarkable patience of people. [It’s hard] to explain why they don’t say to hell with Tutu, [Nelson] Mandela and the rest and go on the rampage.”

DENNIS BRUTUS: Yes, indeed. And I think that time will come. But you must remember we had all those terrible years between 1948 and up to the end of the ’80s, ’90s, when people endured incredible oppression of the apartheid system, a system under which I went to prison and, of course, many others. But there is this insistence on trying to discover the humane values, not to despair, not to resort to violence, if you can avoid it, and achieve a kind of social justice by persuasion, by organization, mobilizing. And I think Atlanta, for me, is a wonderful example of this process at work.

AMY GOODMAN: Alice Lovelace, as national lead staff organizer for the U.S. Social Forum, why did you decide to do this in the South? You also have recently written a piece about Hurricane Katrina.

ALICE LOVELACE: Yeah. I think that the South actually was the only place that the first U.S. Social Forum could have happened for two reasons: one, because it was a symbol of the civil rights movement, which was a very successful convergence of movements, from labor, education, healthcare, grassroots — it was a bottom-up movement that ended in successful change, so we wanted to stand on the shoulders of something that had been successful to demonstrate to people we could have success again; and the second was because the South is a microcosm of the world. We are a part of the Global South. Everything that happens in global communities happens to us here in the South, everything from the poor education, poor healthcare, underpaid workers, bad housing, lack of water. So we, ourselves, are a microcosm of the world and the very issues that we’re trying to correct.

AMY GOODMAN: If people want to follow this online, if they’re not actually in Atlanta right now, where can they go?

ALICE LOVELACE: WRFG, a wonderful community radio station here in Atlanta, is live-streaming from the Social Forum the plenaries and the morning sessions. Our website will be continuously updating and giving people more information about what’s going on at the Social Forum. There are a number of newspapers, Pacifica and different outlets that are going to be either blogging, live streaming or doing current updates on the Social Forum, so people all over the world can follow what’s going on here.

AMY GOODMAN: Alice Lovelace and Dennis Brutus, thanks so much for being with us. And a shout out to our friends at WRFG Radio Free Georgia, as well as to People TV in Atlanta, both very important community media outlets. When we come back, we’re remaining in Atlanta, and we’ll be speaking with a survivor of Hurricane Katrina, as well as an immigrant rights activist, to talk about the latest decision or non-decision coming out of the U.S. Congress. 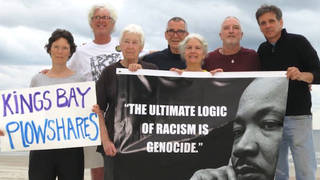