Less than 24 Hours Before his Scheduled Execution, Troy Davis Is Granted 90-Day Stay of Execution by Georgia Parole Board

The 38-year-old African American from Savannah, Georgia, has been on death row for more than 15 years for a murder he says he did not commit. With no physical evidence or murder weapon, the prosecution’s case rested entirely on witness testimony. But seven of the nine non-police witnesses said they were coerced by police and have since recanted their testimony. [includes rush transcript]

AMY GOODMAN: Less than 24 hours before he was scheduled to die by lethal injection, Troy Anthony Davis has been granted a 90-day stay of execution. The 38-year-old African American from Savannah, Georgia, has been on death row for more than 15 years for a murder he says he did not commit.

Davis was convicted in '91 for the killing of white police officer Mark Allen MacPhail. With no physical evidence or murder weapon, the prosecution's case rested entirely on witness testimony. But seven of the nine non-police witnesses said they were coerced by police and have since recanted their testimony. Nine witnesses have implicated another man in the murder.

Davis’s execution appeared inevitable last month when the Supreme Court refused his final request for appeal. That left only the Georgia State Board of Pardons and Paroles. Last night, it agreed to review evidence from Davis’s defense team and hear the new testimony of eyewitnesses.

After the ruling, Troy Davis spoke to reporters by cellphone. He said, “I’m elated. I’m blessed and thankful. I’m one step closer to my freedom.”

Groups including Amnesty International have rallied behind Davis’s case. Former FBI Director William Sessions submitted a written clemency appeal on Davis’s behalf, while the Council of Europe urged the United States not to commit what it said would be an error it would come to regret. And Georgia Congressmember John Lewis testified in person before the parole board yesterday.

CHRIS ADAMS: Thank you very much.

AMY GOODMAN: Can you talk about what happened in this hearing yesterday? We talked with Troy Davis’s sister just as she was walking into the federal building where it was taking place.

CHRIS ADAMS: The way the Pardons and Parole Board in Georgia does the clemency hearings is they have two separate hearings, and the supporters of Troy Davis come and have one meeting and then the supporters of the victim and the victim’s family come for a second meeting. And these two meetings took more than nine hours. And the defense presented testimony from five witnesses who were not heard from at the trial, and they deliberated well into the night before issuing the 90-day stay.

AMY GOODMAN: What exactly was it based on, and what does a 90-day stay mean?

CHRIS ADAMS: A 90-day stay is fairly unusual here in Georgia. What their press release indicated is they are going to study the case and examine the case more and needed additional time to do that. And apparently they thought 90 days would be sufficient to do that. The defense, Troy Davis’s lawyers, who, by the way, are all volunteer lawyers out of Washington, D.C., they brought forward five witnesses who weren’t heard from at the trial, and they offered to bring forward the seven witnesses who have recanted. And apparently the parole board is inclined to hear that type of testimony, and I expect a second hearing will be scheduled.

AMY GOODMAN: Can you explain how the U.S. Supreme Court turned this down, and yet the Georgia Board of Pardons and Paroles starts to reconsider the case?

CHRIS ADAMS: Sure. There are people who are executed all over this country who have questions about the case, about the fairness of the trial and about the process. And since the mid-'90s we have had the Effective Terrorism and Anti-Death — or Effective — AEDPA [Antiterrorism and Effective Death Penalty Act]. It's a mouthful. At any rate, the federal courts now review state courts findings with great restrictions placed on them. And the Supreme Court, as they do in most cases, just chose not to review this one. And they said there was no way for these issues to be properly in front of the federal courts for review.

AMY GOODMAN: So what happens? The parole board, in a sense, retries the case?

CHRIS ADAMS: The parole board here would only be able to commute his sentence from a death sentence to either life without parole or life with parole. The lawyers also have a pending application in front of the Georgia Supreme Court for a motion for new trial based on after-discovered evidence, based on the five new witnesses who exonerate Troy Davis.

AMY GOODMAN: What has been the response in the local media, Chris Adams?

CHRIS ADAMS: Let me share with you. This morning’s Atlanta Journal-Constitution has an article out that I believe you should be able to see, and the media support around the state has been very supportive of the defense of Troy Davis and the claims of unfairness in his trial. And the tone of the article is that they’re somewhat relieved and that most of the people involved in the proceeding are somewhat relieved that this 90-day stay was granted. And I believe people would be more relieved if he’s permanently has his death sentence commuted.

AMY GOODMAN: Do you have any sense of how many people faxed the parole board up until yesterday?

CHRIS ADAMS: I do not.

AMY GOODMAN: And does that kind of pressure make a difference, do you feel? And who serves on that board?

CHRIS ADAMS: The board is appointed by the governor. The most recent — there was a vacancy recently, and they appointed a career prosecutor, someone who had spent 28 years as a head district attorney and had tried a number of death penalty cases, put a number of death penalty defendants on death row in Georgia. So the board is not generally viewed as being defense-friendly, and so it’s a real uphill battle by the time you get to the last minute and try to get your sentence commuted. But I applaud them for taking the time to review this case very carefully. And apparently this is a case that needs careful scrutiny.

AMY GOODMAN: Not only witnesses who have come forward, it’s jurors. I believe at least two have said if they knew then what they know now, they would not have convicted Troy Davis. Is that accurate, Chris Adams?

CHRIS ADAMS: I believe that is accurate. And there were also faxes from William Sessions and, you mentioned earlier —

CHRIS ADAMS: The former FBI director, in the presence of John Lewis, who is quite a hero to a number of people and a legend from the civil rights movement. He was there sitting on the front row in support of Troy Davis’s application yesterday.

AMY GOODMAN: We’re talking to Chris Adams, director of the Georgia Capital Defender. So what happens after 90 days, after this 90-day stay?

CHRIS ADAMS: If they do not commute the sentence, Troy Davis will be executed three months from today.

AMY GOODMAN: What are you planning to do in this time? What is the Georgia Capital Defender going to do?

CHRIS ADAMS: We actually do not have any direct involvement in the case. We’re a trial office. We represent people now at trial. So our job would be, if another case like Troy Davis’s came along, we would try to work hard to make sure he gets acquitted and talk to all the witnesses the first time.

I believe his lawyers will be working feverishly to shore up their claims and to prepare for an evidentiary hearing. And hopefully the Georgia Supreme Court will consider their petition for a motion for new trial. So they’ll be working on these dual tracks, both through the court system and at the parole board, trying to get as good a result as they possibly can for Mr. Davis.

CHRIS ADAMS: For years, the defense community had been told there were never any problems with electrocution in Georgia. And we were all stunned when these tapes were discovered. We never knew that those had been made. It’s chilling. The tapes are chilling and led directly to the Supreme Court finding the use of electrocution in Georgia to be a violation of cruel and unusual punishment.

AMY GOODMAN: We’re talking to Chris Adams, director of the Georgia Capital Defender. Stay with us. We’re going to break, and then you will hear some shocking audiotape. We want you to listen very carefully. Stay with us. 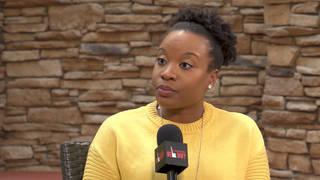