A protest against water privatization in El Salvador last month resulted in 13 demonstrators charged with committing acts of terrorism. If found guilty, they could face up to 60 years of prison time under laws modeled on the USA PATRIOT Act. [includes rush transcript]

AMY GOODMAN: We turn to El Salvador, where protests against water privatization early last month ended with the arrest of 14 protesters, 13 of whom were subsequently charged with committing acts of terrorism.

On July 2, hundreds of people had gathered in the Suchitoto municipality to protest President Antonio Saca’s plan to decentralize water distribution. They saw the plan as an attempt to privatize municipal water resources as stipulated in a 1998 World Bank loan. The protesters were met with heavily armed riot police, who fired rubber bullets and tear gas on the crowd and detained fourteen people. Among those arrested was a journalist covering the protest and members of CRIPDES, the Association of Rural Communities for the Development of El Salvador. They were on their way to attend the rally in Suchitoto.

Last week, the prisoners were released on bail as a result of national and international pressure. But the charges of terrorism remain, and if found guilty, they could face up to 60 years of prison time. El Salvador’s antiterrorism law came into effect last year and is modeled on the USA PATRIOT Act. Human rights groups have condemned the government’s response and application of this draconian law. Human Rights Watch said yesterday the law criminalizes a wide variety of acts most of which “do not fall within any reasonable definition of terrorism.”

Today, Krista Hanson joins us, also from Boston, to tell us more. She’s the program director at CISPES, the Committee in Solidarity with the People of El Salvador. Welcome to Democracy Now!, Krista. Explain what’s happening in El Salvador.

KRISTA HANSON: Well, I think that what’s really important to know about that event on July 2 in Suchitoto is that it comes from — I mean, the resistance that was happening there comes from a long history in El Salvador of — first, of this implementation of privatization. People in El Salvador know what privatization of public resources looks like. The telecommunications, electricity, other industries have been privatized, and the rates go up so much that people have no access anymore to those. And so, you can’t have that with water, right?

So over the last couple of years people have been out in the streets. And community by community, really, going out, and a common protest tactic is to shut down a street and demand access to water, to demand that it not be decentralized or privatized, or that there even be water. People pay water bills right now, and water comes out one hour a day in their taps, or one day a week or two days as a week, so people have been doing this for the last couple of years.

What was different on July 2 is that we’re getting a lot closer to the government pushing forward this general water law that would privatize the currently public water system. So people were out there defending their right to water, defending, trying to stop the announcement of this first step in decentralization.

AMY GOODMAN: And explain the response of the state, of the police, and who the people are who have been arrested.

KRISTA HANSON: So on July 2, the people that went out were the community that lives there in Suchitoto, this fairly rural community, as well as people who are involved nationally in this rural development organization, CRIPDES, the local water union, FMLN representatives. They were all out there trying to stop the announcement of the privatization or what — the government knows they can’t call it “privatization,” so President Saca was there to announce “decentralization,” which, of course, is the first step.

So people were protesting. They were protesting in the street, you know, with signs saying, you know, “Water is a human right.” And the police went in in full, full force, as you were saying, full riot gear, rubber bullets, shooting rubber bullets at close range, shooting tear gas at kids, at old people. And then, actually, four of the people who were arrested were actually in a car a few miles away, driving to the protest. And there’s video of this that was shown in court, and it’s on our webpage, the CISPES webpage, if people want to see it. And you can really see the police dragging people out of their car who were on their way to the protest. And those are the people that they arrested and are currently charging with terrorism.

KRISTA HANSON: They are being charged with terrorism for attempting to go to a peaceful protest against the privatization of water. It’s really terrifying, because, as you said, it is exported from the United States. I mean, when this law was passed — it’s not a coincidence, just stepping back a little bit, that CAFTA passed — CAFTA was implemented, excuse me, in March of 2006. It was September of 2006, last fall, when the right-wing government passed this law called the Antiterrorism Law that would define broadly, broadly define things like occupying a public road as terrorism and allow people to be imprisoned for up to 60 years, which is what these people from Suchitoto are facing. Not coincidentally, the U.S. was behind the passing — the U.S. government was behind the passage of CAFTA, pushed really hard to get it implemented, because even after it passed, there was resistance. And then in September the U.S. ambassador in El Salvador congratulated the Salvadoran government for passing that law and said, you know, “This is proof that we’re partners in the war on terrorism.” So that’s the law.

And this is really one of the first times that this law is being used, and it’s being used, not coincidentally, not against any terrorists, but against peaceful protesters. And so, people see this as really precedent-setting, this case that’s going to come before the courts in September, of seeing whether or not the government really will move forward in imprisoning people and whether or not they actually — you know, they’re declared guilty of — you know, supposedly of terrorism. Everyone is really clear that this is about scaring people out of protesting and criminalizing protest to the extent that people are afraid to go out and defend their right to something that’s so clearly a human right.

AMY GOODMAN: CAFTA stands for Central American Free Trade Agreement. We only have 30 seconds, but, Krista, what does this have to do with the World Bank? How is the World Bank identified with this so-called “decentralization” program?

KRISTA HANSON: The World Bank gave the loan in 1998 that first pushed decentralization and brought in the element of private corporations having a say in this. And maybe just to conclude, also I think that because the World Bank is a part of this, because the U.S. government is pushing this, that’s why as solidarity we’re so concerned about accompanying people out there. And the U.S. government is going to continue to be involved through their major elections in 2009 in El Salvador. Whether it’s the Democrats or the Republicans in power here, they need to maintain their ally, this right-wing government in El Salvador that’s going to push privatization, push the neoliberal model, through repressive policing, through calling protest terrorism and criminal acts.

AMY GOODMAN: We’re going to have to leave it there. Krista, I want to thank you very much for being with us.

AMY GOODMAN: Krista Hanson, program director of CISPES, the Committee in Solidarity with the People of El Salvador, and Gigi Kellett with the Corporate Accountability International, both speaking to us from Boston. Corporate Accountability International is the incarnation of Infact. We will link to the video of the Salvador protest on our website at democracynow.org. 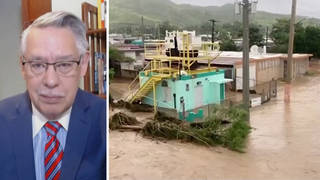