Report from Jena: Thousands Gather in Louisiana to Rally for Jena Six

Independent journalist Rick Rowley joins us from Jena, Louisiana, for a live report on the protests in support of the Jena Six. We get reaction from Little Rock Nine member Minnijean Brown-Trickey. [includes rush transcript]

StoryJul 12, 2022How Sri Lanka Protests Led to a “Reawakening of the Citizen” & Pushed Out President & Prime Minister

AMY GOODMAN: I want to get your reaction to what’s happening in Jena today. I mean, you’re going to be having a major celebration in Little Rock next week on the 50th anniversary of Little Rock. But we will go now to Jena, where Rick Rowley joins us. Rick Rowley is a filmmaker. He is with Big Noise Films. He was just with us because he, too, was just in Iraq and brought us a documentary. But he is back down in Jena. Welcome to Democracy Now!, Rick.

As thousands of people are pouring into Jena for the protest around the charging of the Jena Six, briefly tell us the story. And what’s happening right now?

RICK ROWLEY: Well, we were down here at 4:30 in the morning, as tour buses and the school buses and the cars and the caravans began pouring into the black neighborhood here on the outskirts of Jena. Right now, there are a couple thousand people down here from all over. There are buses from Chicago, from New York, from Washington, D.C., from North Carolina, and most of the population from Jena’s out, as well.

People are coming here to protest against the sentencing or the charging and the trial and the sentencing of six black school kids for a schoolyard fight. These are six kids who were involved in an assault — or allegedly involved in an assault of a white student last year, who were facing attempted murder charges and life imprisonment for a schoolyard fight. And so, people now are pouring in from around the country to protest this.

It’s been called the largest civil rights demonstration since the '60s here. It's definitely the largest kind of mobilization of this kind that this town has ever seen, or central Louisiana has ever seen.

AMY GOODMAN: Can you talk about what happened yesterday, the news conferences that were held, first by Reverend Sharpton, who was there, and then for the first time, Reed Walters? Just describe the scene for us. Reverend Sharpton had just seen Mychal Bell. There were rumors he was going to be released yesterday, but instead, Sharpton says, he saw him in shackles and handcuffs.

RICK ROWLEY: Yes. First of all, Reverend Sharpton came out with Marcus Jones, Mychal Bell’s father, and said, yeah, there were rumors swirling all day long that Mychal would be released. His first charge has been overturned by the appeals court. And so, we were all hoping that he would be out early this week. But the DA and the judge have chosen to keep him inside, while they decide whether or not they’re going to try to retry him in juvenile court. So Reverend Sharpton and Marcus Jones came out and addressed the crowd.

And then, an hour after that, for the first time since this whole case began, the district attorney came. It was a much-anticipated appearance, because he’s published a couple of really inflammatory pieces in the Jena Times, but he’s never actually spoken to media since this whole thing began. So he came out, and it was one of the unfriendlier press conferences I think I’ve ever seen. He read a statement to begin his press conference, saying this trial has nothing to do with race. And immediately, I mean, you could hear like gasps in the back of the crowd. He was obviously flustered by the questions that were asked, or he was unprepared for them. And at the end, as someone asked him, “Why are you trying to destroy these boys’ lives with a stroke of your pen?” he picked up his folder and scattered microphones across the ground and said, “It’s obvious that this press conference is out of control.” And he turned around and ran back inside the courthouse.

Also significant is that he came out with [Justin] Barker, the alleged victim, and flanked by the sheriff and police officers, who are supposed to obviously be impartial in the trying of this case. But the sheriff came out with the prosecutor and the alleged victim to his press conference. And, you know, obviously, the sheriff wasn’t out there standing with the father of the real victim, I would say, of this case, Mychal Bell and the other five students who are now facing, you know, 80 years in prison.

AMY GOODMAN: So, right now, can you talk about the buses that are coming in?

RICK ROWLEY: So, here, there was a trickle beginning at 4:30 a.m. Now, it’s become — the floodgates are open. And, you know, there’s a line I could see of five buses in front of me. I’ve been talking all morning to law school students from Howard University, to members of the Southern Christian Leadership Coalition — Committee, to, I mean, organizations from all over the country, and, you know, asking them why they’re coming out here and what the significance of this all is for them. I mean, first of all, every one is saying that these kinds of issues of racism inside the criminal justice system are not just here in Jena. Here in Jena is a place where they’ve become really visible and really easy to see, but these are problems that they’re facing in Chicago and elsewhere.

Another thing, the local paper, which is white-run, in town ran an editorial a couple of weeks ago, saying, you know, outsiders, we don’t really want these outsiders coming in and causing trouble. The people who are coming on buses today don’t feel like they’re outsiders. They say that, you know, this is America’s problem and that they’re part of the community that needs to respond to this, and that, honestly, if the town, if the DA didn’t want outsiders coming in, he could have not charged these kids with murder.

JUAN GONZALEZ: And, Rick, what about the law enforcement presence? I assume that this is being handled more by state police than by the local Jena town police.

RICK ROWLEY: Well, the local Jena police is absolutely incapable of handling something of this magnitude. It’s a small town. I mean, there’s going to be — by the end of the day, by most estimates, there will be more protesters here than the entire population of the town. So, yeah, it’s being entirely run by state police. There are a few state troopers around here. As we drove in down the back roads, the state police have blocked off most of the routes here. They’re leaving one route open for the buses to come in.

There was a press conference that the state police had a couple of days back, where they said they have the situation under control, but they have absolutely no idea how many people are coming here and obviously are a little bit nervous about their capacity for crowd control here.

AMY GOODMAN: The town has declared a state of emergency?

RICK ROWLEY: Not an official state of emergency, but, obviously, I mean, all the businesses downtown are closed. We’ve talked to a lot residents who are very afraid, I mean, to the point where one of the white residents we talked to said, “You know, this is a hunting community, and we all have guns.” And so, the image that he painted for us was of them barricaded in their houses, armed, waiting for this tide of people to wash through their town and go home.

AMY GOODMAN: And the young man, the African-American man, yesterday — Justin Barker, who was the student who was beaten up on December 4th last year, was there with his parents, with the DA. The African-American teenagers who were charged, only one has been tried and convicted by an all-white jury: Mychal Bell. The others, will they be at the protest today, for example, the people that we interviewed when we were down there, Theo Shaw, Robert Bailey?

RICK ROWLEY: They will not be at the protest today. They, I think under legal advice, have decided that it’s better for them not to be around during this, you know, in case something were to happen, and, you know, to stay out, for the day at least.

AMY GOODMAN: Well, I want to turn back to Minnijean Brown-Trickey. As you listen to this, I am sure, as you have been preparing and showing these films, the HBO film, you were at Harvard and showed the film there, you’re here, you’re going down to Little Rock. This Jena Six story is gaining momentum. What are your feelings today?

MINNIJEAN BROWN-TRICKEY: My feeling are that the sounds coming from Jena alarmed so many people, because they were reruns of what came out of Selma, what came out of Little Rock. The rhetoric that “Our Negroes are fine. And y’all people coming down here, riling them up,” and all that, and that’s what it sounds like, and that’s the tragedy. But I also think it’s because of hearing that again that people feel such a sense of alarm. 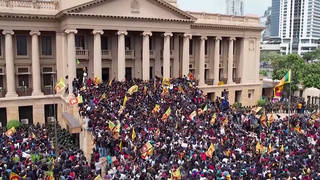