We end today’s show on Mitt Romney, the former Massachusetts governor who won the Michigan primary two days ago. On Wednesday, Romney campaigned in South Carolina preaching a message of economic populism by vowing to fight to keep jobs in America. Romney said, “I’m not willing to declare defeat on any industry where we can be competitive. I’m going to fight for every job.”


As Romney shifts his campaign message to focus on the economy, more attention will likely be paid to his days heading up the investment firm Bain Capital.


Bob Drogin is the reporter who broke the piece for the Los Angeles Times, joining us now from Washington, D.C.


Bob, welcome to Democracy Now! Lay out Mitt Romney’s business background. He’s really running on that, saying: I’m the main person who comes from private business, not inside the Beltway in Washington, a politician.


BOB DROGIN: Yeah, that’s correct. I mean, the first thing is, it’s not an investment firm, as someone just said. An investment firm is something where you make an investment. It’s a buyout firm. In 1984, he was tapped to set up a — what began as a venture capital spin-off of a management consulting firm in Boston called Bain & Company. And Bain Capital began with these small investments in what were then startup companies, but very quickly, within a year or two, it became what’s known as a leveraged buyout company. They would put up a million dollars or so and borrow ten or twenty or fifty more and buy into troubled companies and then strip assets and lay off workers and close factories and do whatever they needed to do, charge enormous fees and sell it as quickly as possible.


Over the years, by the time he took a leave of absence in 1999, they had bought and sold more than a hundred companies. And it’s a little difficult to figure out how many jobs were lost or how many jobs were created, and I’m sure that overall there was probably a net gain in jobs in that period, but there are a number of cases that I was able to track where they did close companies, close factories, where they made staggering profits in the hundreds of millions of dollars, shortly before companies crashed off into bankruptcy.


You know, this was the so-called decade of greed, and these were guys who were very much in the model of the Gordon Gekko. I mean, these were — and it’s not illegal, it’s not improper; it’s — you know, it’s the way the system works. They went in, they bought up troubled companies. In some cases, they made them better; in some cases, they just, you know, shredded them and took the money and ran. So, that’s the broad background.


A side light of that was Bain Capital, which today has assets of about $60 billion — that’s their — the number that they officially say — and about a third of that comes from these offshore operations that Romney set up when he was still there, in particular, companies that are set up — really, they’re just mail drops, they’re mailboxes; they don’t have any staff, they don’t have any operations. The one on Grand Cayman Island is a Post Office Box 60D, I think, on Grand Cayman Island, and the ones in Bermuda are also at a lawyer’s office. But they’ve got them in other places as well. And they bring in somewhere above $25 billion a year.


And again, it’s — these are companies — these are operations set up through various systems. They’re blocker corporations. They are investment — or rather, equity groups that are set up to attract, for the large part, foreign capital. And the reason these are set up overseas is so that foreign investors in these private companies can avoid paying US taxes. Mitt Romney and his colleagues don’t get that advantage. So it’s not like they are avoiding taxes through this. It’s simply — what happens is, they’re helping other people avoid paying US taxes, and as a result they make enormous profits.

And how, precisely, do the foreign investors avoid taxes? Are these companies that are based there — are they investing in US companies?

For the most part. They also have holdings offshore. Bain now has — I can’t really recall, because I really didn’t look into it. I mean, it has operations in Hong Kong, in England and a number — I think it’s got eight affiliates offshore — that is, overseas. And I know the one in Italy, for example, recently got some attention, because it was buying into something that had ties to the Iranian regime and Iranian oil. But it’s — those are sort of separate from what I was looking at. For the most part, the ones that Bain Capital in Boston set up through these tax havens, these, you know, islands, basically — Bermuda, the Caymans, the Jersey Islands and whatnot — were really about investments in US companies.

Bob Drogin, you write about Romney being the wealthiest candidate, a personal fortune of up to, what, $250 million?

I think that’s a conservative estimate, but it’s at least — you know, it’s somewhere in that range.

Tell us about Brad Malt and what he told you.

Brad Malt is head of Ropes & Gray. He’s a lawyer. He is the trustee for what was originally set up as a blind trust for Mitt Romney’s financial holdings, when he was elected governor of Massachusetts in 2002. The blind trust is no longer quite so blind, because last year, as part of his campaign disclosure forms, that we suddenly got to see what’s in the trust in very broad terms. Among the things that we learned is that, even though Mitt Romney claimed to have left Bain & Company in 1999, in fact he was still there, still on the books, until he — basically until he ran for governor. And he still has the right to invest and the right to continue to draw his profit share on his margin until 2009, and he still retains equity in — I believe I counted thirty-two, or identified thirty-two separate Bain-related investment funds, as well as other funds that he has access to.


What Brad Malt told me was — and I was specifically trying to understand these offshore operations — was that it really didn’t matter whether these were set up, you know, in the Cayman Islands or Mars, the point was it was a way of attracting what he described as billions of dollars. And, of course, that’s exactly right. That’s what they were able to do. And he said he has — these have been very sound investments for Romney. He’s only looking at Romney’s personal fortune here, that they’ve paid upwards of, he said, 20% to 30% a year, which obviously, you know, beats T-bills or something, and that he’s made, you know, numerous investments in those funds since taking over the trust. So he was arguing, making the case, as the campaign did, that not only is there nothing wrong with these — these are not tax loopholes, in the sense that Mitt Romney doesn’t gain any tax advantage from it — but in fact that they’re quite wise investments on his part.

Now, to the degree that these firms were operating offshore and, I assume, that the investors themselves are not necessarily known, doesn’t it create a problem in terms of, if Romney does get elected, not really knowing the partnerships or the business relationships that his firm has had in the past, in terms of once he becomes president?

Yeah, well, potentially so. I mean, these are private companies. These are closed funds. The whole point of going offshore is because there’s less transparency than in the American system. It’s not simply that they are tax havens — there’s no income tax, there’s no corporate tax, etc. — there’s no transparency in those places. I mean, they run — they’re shell companies. They’re set up, you know, in a mailbox that operates through a Delaware company that, you know, a holding company and a limited partnership and whatnot.


And I’m not a business reporter; I’m just trying to figure out what does the guy own and where does it come from. And I’ve got to tell you, you know, it’s not simple. I mean, there’s no — it took me weeks to just figure out when he left Bain Company. There’s nobody there who will give you a straight answer, and it’s not listed in the corporate records. The whole point of this is to get away from Securities and Exchange Commission filings; that’s the reason you do these things.

Now, Bob Drogin, Bain is poised to take over Clear Channel, this massive radio conglomerate around the country, owns over 1,200 radio stations. Bob?

OK. Also, I wanted to ask you about the AmPad deal. And we only have a minute to go.

OK. AmPad was basically one of the deals that came back and really caused a problem for Romney back in 1994, when he ran against Ted Kennedy, when he made his first bid for elected office. He ran for the US Senate seat for Massachusetts. AmPad was a company they bought in 1992, and — Bain Capital, sorry — made a big investment and essentially bought the company. And after they bought it, the new management team that went in closed factories, fired a lot of people and really slashed the operations. And when he ran for Senate, some of these striking workers came and picketed him and really dogged his campaign, and it created a pretty ugly labor dispute. I think Kennedy described, you know, Romney at the time as putting profits over people.


And after the campaign was over, they took AmPad public — and he lost — they took AmPad public, and it prospered for about a year, and then it crashed into bankruptcy, and by then Bain — and laid off, you know, several thousand people. By then, Bain Capital had taken out, I was able to document, $102 million. And that was a model that we saw in a number of places. I found about at least a half-a-dozen companies, where Bain Capital essentially bought in; laid people off; stripped it down; took out, in some cases, tens of millions of dollars or hundreds of millions; and then the company crashed into bankruptcy.

Bob Drogin, we’re going to have to leave it there. I want to thank you very much for being with us, national security reporter for the Los Angeles Times. We will link to his reports at our website, democracynow.org. 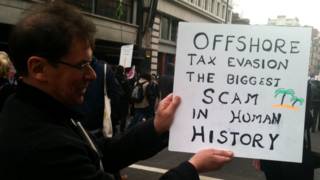