In Kenya, at least 300 people have died in ethnic fighting following last week’s disputed presidential election. Police estimated that 75,000 Kenyans have fled their homes due to the worst violence in Kenya since 1982. On Sunday, Kenya’s Election Commission declared President Mwai Kibaki the winner of Thursday’s election, but immediately questions were raised about the fairness of the vote. We speak with Maina Kiai in Nairobi. [includes rush transcript]

AMY GOODMAN: In Kenya, nearly 300 people have died in clashes after President Mwai Kibaki was re-elected in last week’s disputed presidential election. Over thirty people burned alive Tuesday when a church was set on fire. Reports indicate 75,000 people have been displaced.


Kibaki’s government has accused opposition leader Raila Odinga of fomenting ethnic conflict. Odinga blames the police for the violence and raised questions about the fairness of the vote.


RAILA ODINGA: Well, the violence across the country is not being caused by the common man and woman. The violence is being caused by the policemen who are shooting people on sight. Now, these people have not been asked by us to come out. The people saw the circus on the television screens, when they saw that they were being robbed openly by the Electoral Commission, and that’s the reason why the people took out spontaneously to the streets.

AMY GOODMAN: That’s the opposition candidate Odinga. Maina Kiai is the chair of Kenya’s National Human Rights Commission, joining us on the phone now from Nairobi. Welcome to Democracy Now! Can you tell us what’s happening right now in Kenya?


It looks like we’ve just lost him. Again, the latest that we have from Kenya, on Tuesday in western Kenya, three —- overall in this disputed election, at least 300 people have died. It’s believed in one church alone, the burning of a church, at least thirty people died who had taken refuge in the church. A number of them were children.


We’re hoping to get the chair of Kenya’s National Human Rights Commission on the phone to talk about the latest situation in Kenya, a very dire situation with the disputed elections. We’ve gotten him back on the line now. Mr. Kiai, welcome to Democracy Now!


AMY GOODMAN: Can you tell us what’s happening?


MAINA KIAI: Well, I think there’s a sense of tension, clearly, in the country. I mean, really, I think we can call it a crisis that’s going on in Kenya. After the declaration of Mwai Kibaki as president, in circumstances and in situations where I think a better process could have been used, there’s been a spate of violence across the country. Nairobi has been very, very tense. In fact, there’s been violence in Nairobi itself, the capital. There has been violence in parts of western Kenya, in the Rift Valley province, and in western Kenya itself. And so far, we are talking about between 250 and 300 people dead, easily 100,000-plus people internally displaced, thousands and thousands injured. It’s getting worse. It’s getting worse. And we’re not seeing any sign of a political solution that can then calm the tensions. So it’s [inaudible] -—


AMY GOODMAN: Tell us about the election and what happened, why the results are being disputed, even though the President has now been sworn in once again.


MAINA KIAI: Well, what happened in the elections is that the election day itself was very peaceful and very good, pretty well organized. The problems started as the results were coming into Nairobi from the constituencies across the country. At one point, the opposition candidate had a lead over Mwai Kibaki of more than a million. Then all of a sudden, results stopped coming in, and delay happened one day, two days, and there is a delay of the results. Then all of a sudden results start flocking in that go solidly for Mwai Kibaki. Some of them — a lot of them are expected to be for Mwai Kibaki, but the numbers were astonishing, in terms of the numbers he was getting.


Eventually, at some point, it came out to a difference of about 400,000 votes between the two candidates, with Raila Odinga in the lead. And then, again, another stalling of the process, and we have thirty constituencies that haven’t reported. They’ve reported the parliamentary results, but not the presidential results. So then, the results start coming in again, again the numbers are overwhelmingly large for Kibaki.


It was then discovered that what had been announced, because the procedure in Kenya is that at the constituency level, once results are in, they must be announced publicly by what we call the returning officer. And then they are pinned on the notice board. So what exactly the media was doing was getting their people in the returning officers’ place across the country, who then call in to their headquarters in the media and say there’s this as the result, tally we’ve got. So one of them came up where what had been announced on the ground was I think something like 60,000 votes for Kibaki. What was announced in Nairobi by the Electoral Commission was 95,000. So all of a sudden, questions are asked. When did this happen? And more and more of those kinds of questions began being raised.


To its credit, the Electoral Commission then asked — suggested that an audit be done by between opposing parties and observers. People spent the whole night in a room looking through each of them. I am told that they found tons — a lot and a lot of anomalies. Nevertheless, the next day, the Electoral Commission then comes back without having addressed these. They take a position that what the law provides that once they have announced them, they cannot take them back.


At that point, I personally was on the phone with the chairman of the Electoral Commission, urging him to remember that his primary duty is to deliver free and fair elections, and even though the rules may say that once declared it cannot be retracted, if that declaration is not going to deliver open, transparently free and fair elections, then the best thing to do is to postpone and delay the results, because at that point the country was exceedingly tense. You could feel it. There was a lot of fear around the country. And I was urging him to simply call the two parties together, the two main protagonists together, and urge them to agree to a transparent verification process so we can be able to correctly and confidently ascertain who the president is when the president is declared.


They declined to listen to me. They went ahead and announced the results, despite again even evidence from the EU election observers that again agreed that in at least two constituencies what was declared in Nairobi was vastly different from what was declared on the ground by the returning officers. They still refused to do it and went ahead and announced. Commotion happened, and they then quickly went — quickly went and saw Mwai Kibaki, and this was where the commotion has started since then.


So, to us, who are here, we are — a lot of us put responsibility for a lot of the violence on the back of the Electoral Commission of Kenya. They had a constitutional mandate that they did not live up to, and they have hurt this country. At this point, for us, we’re trying to figure out how do we then move forward, how do we calm the country down, how do we save people’s lives. So, many of us have been on the airwaves on television, on radio, calling upon Kenyans not to vent their anger against other innocent Kenyans.


AMY GOODMAN: We’re going to have to leave it there. I want to thank you very much, Maina Kiai, chair of Kenya’s National Human Rights Commission. He was speaking to us from Nairobi, Kenya. We will certainly continue to follow the situation on the ground there. 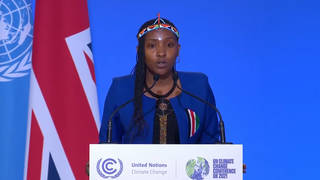