Entertainment industry writers are back on the job after overwhelmingly approving a deal that will eventually give them a percentage of revenue for work posted online. We speak to Michael Winship, president of Writers Guild of America, East. [includes rush transcript]

JUAN GONZALEZ: Entertainment industry writers are back on the job after voting to end their more-than-three-month strike. On Tuesday, Writers Guild of America members overwhelmingly approved a deal with industry groups that will eventually give writers a percentage of revenue for work posted online.

Along with more than 10,000 writers who walked out, the strike immobilized thousands of technicians, makeup people and other production workers. The Los Angeles Economic Development Corporation estimates that the strike cost the local economy $3.2 billion in lost wages and revenue.


During the 100 days of the strike, reality shows and repeats ruled prime- time TV, and most late-night comics had to come up with their own jokes. But everything was back to normal yesterday. This is how Jon Stewart, host of Comedy Central’s The Daily Show, opened his program.


JON STEWART: Greetings. I bid you the fondest of welcomes and have prepared for your pleasure an evening of levity and mirth. Tonight’s journey, whilst admittedly brief, will yet encompass that most elusive of human foibles. What the [bleep] is this? What am I — what is — wait a minute, words in the prompter? Script on my desk? Vending machine upstairs out of Funyuns? The writers are back!

JUAN GONZALEZ: Immediately following The Daily Show was Comedy Central’s other big hit, The Colbert Report with host Stephen Colbert. He celebrated the return of the show’s writers by bringing them out on stage.


So first things first, let’s all welcome back the Colbert Report writers! Come on back, guys. Woo! There you go. Good to see you, Rich. Frank! Come on! There you are. Rob, you beautiful boy, get out here! Tiki, I missed you, man! Get out here. Thomas! Alright, there you go. Laura, you beautiful lady, that is great. Nisha, what an honor! Get back out there. Peter, get over there, you, fella. Here you go. Here’s another Pete, there’s the second of the two. Ryan, long time no see, my buddy. Get out there. Judy! Alright, get to work, you. Alright, how you doing, Barry? Nice to see you, my man. Here’s a short one. Thanks, Jay. There you go. Kevin, man, have I missed you, buddy. Thanks so much. Get to work, buddy. Come on, let’s go.

AMY GOODMAN: For our radio listeners, among the people Stephen Colbert brought out on stage was former New York Giants running back Tiki Barber, former New York Times reporter Judith Miller and actor Kevin Bacon. For more on the end of the strike, we’re joined right now by Michael Winship. He’s the president of the Writers Guild of America, East. Welcome to Democracy Now!, Michael.


MICHAEL WINSHIP: Thank you, Amy. It’s nice to be back.


AMY GOODMAN: So, tell us what has been resolved.


MICHAEL WINSHIP: What has been resolved at this point is that we voted to lift the restraining order, which started the strike, to end the strike. 92.5 percent of our members on Tuesday voted — well, not — 92.5 of the members voting voted to lift the strike on Tuesday evening. We still have to ratify the contract. That has to be done, and that will be done over the next ten days. The ballots will be mailed out the next day or so. People will have until the 25th to get them into us or come to a meeting and vote that day. But given the enormity of the vote to end the strike, I’m assuming, I’m hoping, that the contract will be ratified.


JUAN GONZALEZ: And in terms of some of the conditions, you did manage to win a percentage on online revenues, but there was sort of a delay in when those would kick in?


MICHAEL WINSHIP: Well, it depends on the nature of the show that’s being shown. I mean, it really breaks down into two areas. It breaks down into the reuse of programming that’s already been created for television and motion pictures or the creation of original material for the internet and new media. In the case of old, say, rerun material going back to 1977, those folks, when they’re streamed, get an automatic two percent of distributor’s gross, which is very real money for us. This is the first time — this was the other precedent that we set, was to get a percentage of distributor’s gross, which is the money that an exhibitor pays for content, for our stories. So that was a huge win for us. Then, in terms of windows and streaming, it breaks out in different ways, in various percentages. But the fact that we established that principle and that we established the principle of jurisdiction in the internet and new media, these were huge advances.


JUAN GONZALEZ: So, in other words, anything that’s previously been produced, then writers will get — if now it’s streamed on the internet, will get a percentage of?


MICHAEL WINSHIP: Well, yeah, stuff before this contract — I mean, from 1977 onward. And then new material — I mean, more recent material, things like The Office and so forth, there will be a window of seventeen to twenty-four days, depending on if it’s a brand new show or a show in its second season. But in the third year of the contract, those shows get two percent of distributors’ gross.


AMY GOODMAN: Why did it take a hundred days?


MICHAEL WINSHIP: It took a hundred days because, I think, a couple of reasons. I think it took a hundred days for them to realize that we were serious. It took that long to make them realize that we meant business. And it came to a point, as we were talking before, I think there was a breaking point. And the breaking point was right now. This was the moment of our maximum leverage. The rest of the television season for this year was in total peril. The pilot season and the creation of programming for the new fall season was almost in peril. And then you have the sort of iconic nature of the Oscars. People really wanted the Oscars to be on on February 24th. So it was really a maximum moment for both sides, and we were able to come together and make a deal.


JUAN GONZALEZ: And in terms of the various — the management side, were there any particular companies that still were holding out, versus others that were saying, hey, it’s time to — let’s make a deal on this?


MICHAEL WINSHIP: Well, what really happened, what really changed the nature of the negotiation, was that the CEOs stepped in. Prior to this, we’d been dealing with their labor representatives and other people from the studios and networks, who all make up the AMPTP, which is the Alliance of Motion Picture and Television Producers. What happened finally was that a couple of the executives — Peter Chernin of Fox, Bob Iger of Disney — broke away to make separate informal private talks with our negotiators, and also Leslie Moonves from CBS. And that was really the breakthrough, because, to a degree, there had been some demonizing on the part of the AMPTP of who we were and what we represented. When the executives got into the room with us, they realized that we weren’t these demons, that we weren’t these crazy people, that we really had some quite reasonable demands, and we were able to make a deal.


AMY GOODMAN: Well, I mean, after all, you were the guys putting the words in their people’s mouths most times, outside of this hundred-day strike.


MICHAEL WINSHIP: Well, yeah. And the other thing that I always say about this that was extraordinary was that we were striking on the issue of internet and new media, and we use the internet and new media so terrifically, in terms of viral videos and blogging and websites and so forth and so on, that we proved the power of the internet. We proved exactly what we were on strike about.


JUAN GONZALEZ: To what degree did the deals you cut, for instance, with Letterman and some of the others previous to that allow you to get — have some sort of control over the image of how the strike was being portrayed to the American public?


MICHAEL WINSHIP: Well, I think that we always had enormous support among the American public, but I think when we were able to make a deal with Worldwide Pants, for example, the people who do Letterman and Ferguson, David Letterman was tremendous in terms of talking about the strike and having material that was written by his writers about the strike, about constantly referring to the strike. So he kept it in the public mind. I think that helped a lot. But the real thing about the interim deals that helped was that they proved that we were capable of bargaining, that we were capable of negotiating, that we were capable of making deals, which the AMPTP denied. They said we were too recalcitrant and angry and stubborn to make deals. And they made deals that were basically what we were asking for from the get-go.


AMY GOODMAN: Jon Stewart was supposed to do this big do at the Paley Center honoring Sumner Redstone. This was in the midst of it. Of course, it was planned beforehand.


AMY GOODMAN: He pulled out?


MICHAEL WINSHIP: He pulled out. He said he had too much work to do, because he didn’t have his writers, basically. And I think he was also looking down the road and hoping that the Oscars would happen and thinking about the enormous amount of work he would have to do in preparation for that.


AMY GOODMAN: Now, just to be clear, it’s not over yet. The vote has to take place.


MICHAEL WINSHIP: The vote to ratify the contract has to take place, and that will all take place between now and February 25th. But we voted to lift the strike. And what happened was that the council and the board of the union actually were the ones who initially ordered the strike. There was a strike authorization vote that authorized the council and board to do that. The council and board could have equally lifted the strike, could have just voted amongst themselves to lift the strike. But we had membership meetings on Saturday, and it was clear to us that the members wanted to be participate in that decision. And so, we had a separate election just to vote on that.


AMY GOODMAN: Michael Winship, thanks very much for being with us.


AMY GOODMAN: Congratulations. He is president of the Writers Guild of America, East. The writers have voted to end the strike. It lasted 100 days. 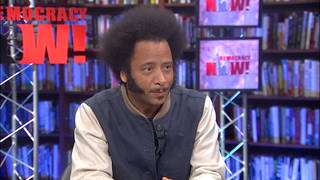